by Derek Wilson on July 7, 2005 3:17 AM EST
78 Comments | Add A Comment
78 Comments + Add A
Comment
UPDATE: After hearing feedback on the article, we went back and ran tests on the GeForce 6800 GT and the Radeon X800 XL in order to fill in an upper midrange price gap. Note that there are no tests for the X800 XL at 2048x1536 due to difficulties getting the card to run properly at this resolution (it would only render the upper left 1600x1200 of the screen). Though we have alluded to it before, we would like to note that while we have had zero issues running NVIDIA cards at very high resolutions, it has been a constant struggle to get ATI cards to properly render resolutions above 1600x1200 on analog monitors.

As far as performance of this update goes, the X800 XL slightly trails the 6800 GT without AA enabled, but performs much better after all the options are turned up.

The Battlefield series has thus far been a resounding success in terms of popularity. Among the very first of the seemingly endless stream of WWII based war games, Battlefield 1942 broke highly sought-after ground. Digital Illusions CE (DICE) has done it again with the beautifully crafted Battlefield 2.

This modern era combat game pits US troops against imagined Chinese and middle eastern forces. With 16-, 32-, and 64-player maps, gamers are able to immerse themselves in anything from a small scale game to a war full of total carnage. The goal is to seize and defend multiple control points from the enemy, and while this concept may seem simple enough, the game play that ensues is fast-paced and intense. 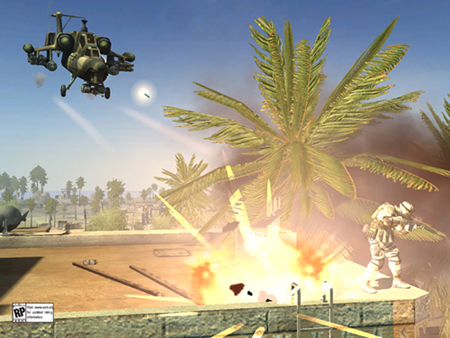 The ability to command an entire battle and tightly organize small squads of players adds a healthy heaping of tactics and strategy to battles. Players can still go at it alone in sniper or special ops roles, but in all cases, clear graphics are an important advantage. Even at lower resolutions, the game is gorgeous, but in order to take full advantage of the terrain, stay on top of advancing forces, or snipe from extreme distances, graphics detail and resolution must be set as high as possible.

DICE has, again, developed their own engine in order to take complete advantage of modern hardware in the way that they see fit. The beauty of the combat in this game is nothing short of amazing, and players will want to turn on all the bells and whistles. What kind of hardware will it take to run this game at huge resolutions and blazing frame rates? That's what we're here to find out.

This test of multiple graphics cards in a demo recorded and played back using the built-in demo recording and playback functionality to determine performance characteristics over resolutions from 800x600 all the way to 2048x1536 with and without 4xAA/AF. In order to make sure that each card was tested correctly, we deleted the shader cache after installing each card. One of the major selling points of today's budget cards is their ability to run modern games at modest resolutions without sacrificing effects and features. For this reason, all cards were tested with quality settings on high (except AA and texture filtering where indicated). High Texture Filtering settings result in 4xAF and Medium gives 2xAF, and we did not use control panel set AA/AF levels as both ATI and NVIDIA recommend using in game settings. We used an FX-55 based system with 1GB of 2:2:2:8 RAM for our tests with the latest public WHQL drivers (Catalyst 5.6 and ForceWare 77.72).