A Look at Solaris 10 and Sun's Dual Core Fire V40z

Several months ago, Sun gave us the opportunity to look at a quad Opteron, 3U rackmount server that had everyone reevaluating Intel's dominance in the server arena. Four months later, AMD finally has some significant market share for entry level servers. Our original quad Opteron 850 server was an impressive piece of machinery, but since AMD's launch of dual core processors, a whole new class of high performance entry servers has evolved.

Sun was extremely pleased to announce to us that their dual core V40z had set the 64-bit SPEC JBB2000 World Record. We couldn't have been more excited to get a similar configuration for our testing to do some real world benchmarks for ourselves! Today we will look at one of these high performance Sun Fire V40z machines and see how they compare against the previous generation of V40z.

Since we are looking at an 8-core Opteron server today, a huge portion of our time will be dedicated to investigating scalability. While it is relatively hard to take an operating system or application and design it to run on two processors instead of one, it is also equally hard to take a system designed for two processes and scale it to eight. The cost prohibitive nature of 8-way systems traditionally make scaling defects difficult to really ascertain, and likewise its not too often that we even pay attention to them. With processors heading toward dual and eventually quad core, scalability of the OS and hardware begin to carry more and more weight.

For anyone in the computer business, there really isn't a better feeling than seeing 8 Opterons POST. 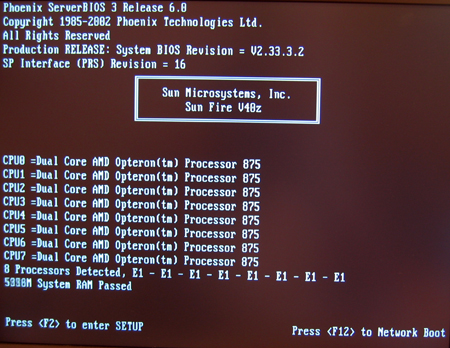