As with NVIDIA's multi-card graphics solution launch, ATI is bringing to market their Radeon Xpress 200 CrossFire-Edition chipset. Motherboards based around CrossFire will feature 2 physical PCI Express x16 slots with x8 electrical connections. If the motherboard manufacturer implements it, the second PCI Express slot does not require a selector card and can be used with any other x8 or lower device. When only one graphics card is installed, the BIOS is capable of reconfiguring dynamically the number of lanes that the PCI Express slots run, provided that the motherboard includes support for this feature. Some vendors will sell motherboards set up just like NVIDIA's solutions (more on that later). 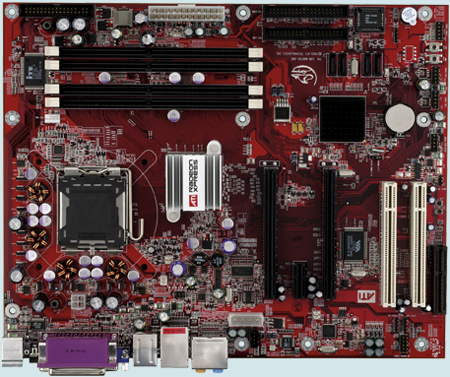 Limiting the cards to only 2 x8 PCI Express connections may be a bottleneck if a game makes heavy use of the bus. Of course, we will run into similar issues with NVIDIA's solutions when paired with games that are PCI Express intensive. Unfortunately, as none yet exist, testing of this category of application is very difficult.

The need to buy a new motherboard in order to upgrade to a multiple GPU solution will likely keep some people from upgrading, but NVIDIA's solutions have the same problem. The fact that CrossFire is only being offered for the X800 and X850 series does limit the upgrade potential at this point. We have been recommending against using multi GPU solutions as an upgrade path option, but offering that freedom is still a plus.

ATI has given us the indication that CrossFire should work on Intel Chipsets as well as their own. This could give new life to those Intel designs originally targeted at SLI. Though not explicitly stating that CrossFire will work in an NVIDIA SLI board, it definitely seems possible. From an adoption/compatibility standpoint, ATI is certainly "evaluating other options".

There is also no physical reason why SLI cards could not work in an ATI Xpress CrossFire-Edition motherboard. The only thing that should stand in the way of this combination is NVIDIA's driver support. With the price premium that NVIDIA charges for their SLI chipset, it is clear that they want to discourage users from going another route. As they had owned the market on multi GPU solutions until now, that was an option. Now that ATI is throwing some competition in the ring, it would not be smart to exclude potential customers from using SLI just because of their motherboard choice.