Xiaomi is focusing the PR of the Mi 11T series on the fast-charging capabilities. Notably, the 11T Pro comes with a 120W fast charger:

It’s a USB-A connector on the power brick, and we can see that to achieve 120W the phone uses 20V and 6A transmission. The 6A is the rather special part as this requires a special thicker cable that’s included – otherwise any other generic cable will not allow to these kinds of power levels. 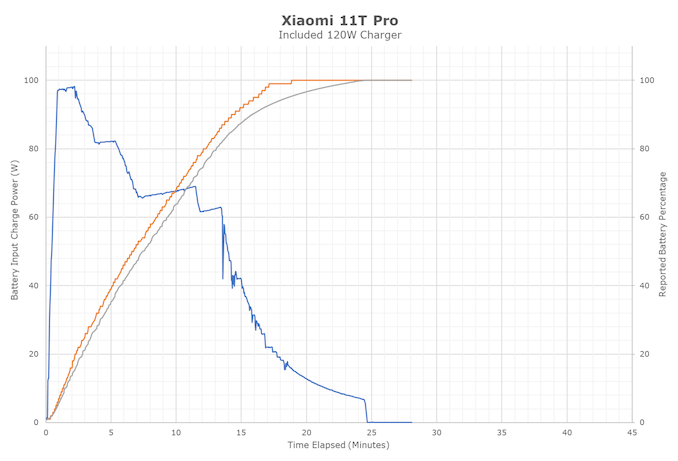 In terms of charging, we can see that the actual charge power into the phone reaches around 97W. The brick at the wall consumed up to 115W – keep that in mind when reading about fast-charging marketing claims, it’s mostly always the at the wall figure that’s being advertised. 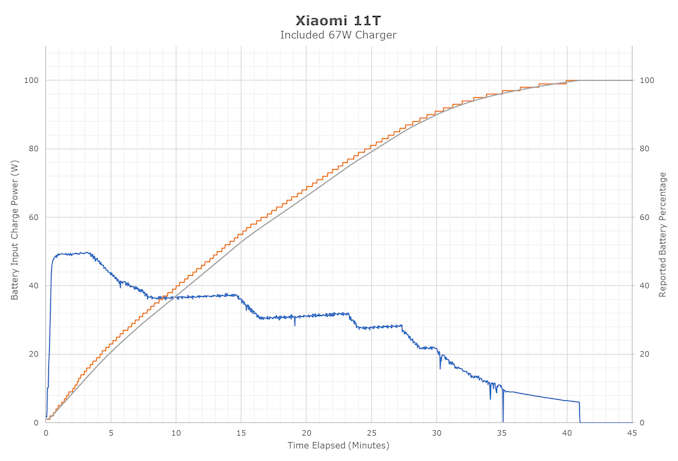 Xiaomi made a few claims about the charging system a extract of the latest PR:

Xiaomi’s first smartphone to launch globally with the company's proprietary 120W Xiaomi HyperCharge technology. The industry-leading technology will enable a 100% charge in just 17 minutes*, giving creators more time to keep up with their creativity and minimize downtime by ensuring a full day use. This is achieved through innovative technologies such  as dual charge pumps, dual-cell battery structure, MTW, Graphene application on Li-ion battery and Mi-FC technology. The safety of the battery is guaranteed by a TÜV Rheinland Safe Fast-Charge System Certification, 34 charging and battery safety features, real-time temperature monitoring and other measures

Notably, we had a few questions about the claims. First of all, the 17 minute claim is generally bogus – while yes, the phone does showcase a 100% status after around 17 minutes, which we reproduced, it actually doesn’t stop until around 25 minutes, when it reaches a true 100% figure. This is called fuzzy logic battery percentage reporting, and is generally used as a psychological incentive to not let your phone charge to 100% - almost every vendor out there does this, some to much worse discrepancies than showcased here.

We had sent Xiaomi a set of questions about 4 weeks ago, and gotten some answers only 2 days ago:

Q. Can we document the 34 safety features features?

I questioned about the 34 charging features, and got an extensive list back as an answer. Generally, all these features are very much generic mechanisms that can be found in almost any smartphone, and are fundamental to any charge system, with only a few specific ones related to the serial battery charging being in any way special here.

Q. - What does up to 800 cycles mean? What are the criteria for this figure? Usually there's always some specification such as "retain up to 80% charge after 800 cycles".

- How much more is the battery degraded compared to regular charging speeds? Does Xiaomi have any data to share in regards to battery health?

A. [...] The battery can obviously handle way more than just 800 cycles. You are absolutely right, the idea here is that it will maintain 80% of its capacity after 800 charging cycles, which is roughly two years before you'll notice any real difference. For most smartphones that number stands at only 500 cycles. The testing conditions are simple, we test the batteries under room temperature charging and discharging it thousands of times to make sure that the battery is able to retain most of its capacity.

In the initial PR a few weeks ago the 80% figure wasn’t mentioned, hence why I asked about the 800 cycles number.

In general, the issue we’ve been having with a lot of vendors is that we are having a lot of issue in getting anybody to actually specify the exact details of the test environment of these charge cycle tests and results.

In particular, I’m asking about the depth of charge of the test – a cycle can either be a full 0-100% charge, or it can also be 5 40-60% charges, in battery terminology, both of those count as a full cycle, however the 0-100% cycle will put significantly more stress and degrade the battery a lot more than the 5x 40-60% cycles.

Xiaomi here also isn’t very clear in their answer and didn’t address the question. Particularly, they talk about “most smartphones” only able to achieve 500 cycles, however, most smartphones don’t have 120W charging, so it can’t possibly be a valid comparison.

Xiaomi also notes that the battery is tested under “lab conditions” – this was also a topic of kerfuffle we’ve had with OPPO last year as the company kept producing questionable test results without any context of test methodology.

I followed-up with the above question for clarification. This was also a stickling point with OPPO last year, as they would refuse to answer that the advertised charge cycles and capacity retention was actually tested with the advertised fast-charging system. I haven’t had a response from Xiaomi yet on the matter, however this was extremely close to the embargo time, I'll make sure to follow up if they do respond.

Q. For the TÜV certification - we've had similar claims from other OEMs, but the issue was that the certification doesn't have any public test methodology documented, nor are the exact results ever published. It is our understanding that this certification only essentially checks that the device doesn't result in any hazardous situation, but doesn't test things like battery health. Any more information is helpful."

However, at Xiaomi we use laboratory cycle verification, third-party laboratory tests, and ORT verification methods to ensure that the battery cycle life meets the highest standards.

Xiaomi deserves credit here to properly dismissing that notion and confirming that the TÜV certification is only related to safety – as in, they test that the charger or phone don’t blow up. Battery health and degradation is unrelated to the (non-public) test-procedures and certification.

Unfortunately, it’s been extremely hard to get a clear non-evasive answer from any vendors out there that promotes such extreme fast-charging systems. Xiaomi here also wasn’t able to produce any kind of convincing evidence that would argument that the 120W charging system doesn’t notably impact battery degradation.

We’re in the process of writing up a more dedicated and general fast-charging article that focuses on real data, and the actual latest science on fast charging. There is an incredible amount of misinformation, misconceptions, and outright falsehoods that are floating out there that we want to address.