The ASUS Prime B560M-K is the most basic of the Prime series models, with a very minimalistic looking PCB, and focuses on just the basics. The design follows the typical Prime series black and silver color scheme, including a patterned PCB and a small silver power delivery and chipset heatsink pairing. ASUS also cuts down the memory slots to two from four on the other Prime B560 models. It is however advertising an 8-phase power delivery and requires a single 8-pin 12 ATX CPU power cable to provide power to the processor. 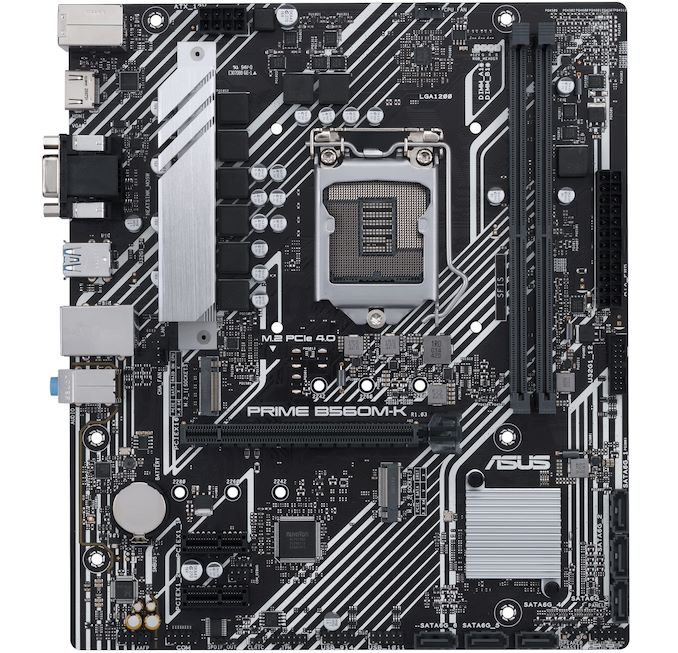 Located in the center of the board is a single full-length PCIe 4.0 x16 slot, with two PCIe 3.0 x1 slots sitting beneath it. For storage, the ASUS Prime B560M-K includes two M.2 slots with one operating at PCIe 4.0 x4 and the second at PCIe 3.0 x4/SATA. There's a total of six SATA ports, which all include straight-angled connectors, and allow for users to install RAID 0, 1, 5, and 10 arrays. In the top right-hand corner are two memory slots, with support for up to DDR4-5000 and a total capacity of 64 GB.

Although we don't have an image of the rear panel at the time of writing, we know the ASUS Prime B560M-K includes one HDMI and one D-Sub video output. It also hasthree 3.5 mm audio jacks powered by a Realtek ALC897 HD audio codec, as well as a single Intel I219-V Gigabit Ethernet controller. There's a PS/2 combo port for legacy peripherals, while the board also has four USB 3.2 G1 Type-A and two USB 2.0 ports.