Earnings season is once more upon us, and once again leading the charge is Intel, who this afternoon reported their Q4’2020 and full-year 2020 financial results. The 800lb gorilla of the PC world has seen some unexpectedly strong quarters in 2020 following the coronavirus outbreak, and despite all of the uncertainty that entails, it’s ultimately played out in Intel’s favor. As a result, they’re closing the book on yet another record year, making for their fifth in a row.

Starting with quarterly results, for the fourth quarter of 2020, Intel reported $20.0B in revenue, which is a drop of $0.2B over the year-ago quarter. Intel saw a very good Q4 a year ago, and while Q4’20 is once again their strongest quarter of the year, Intel’s momentum as a whole is starting to back off on a quarterly basis. More significantly, Intel’s net income has dropped 15% YoY, with Intel booking $5.9B there.

Driving this drop – besides the ongoing market distortions caused by the coronavirus pandemic – is a combination of softer gross margins, increased R&D spending, and increased taxes. Intel’s famous gross margin remains below their historical 60% benchmark, coming in at 56.8% for the quarter as Intel continues to ramp up their 10nm capacity. Meanwhile Intel’s tax rate has shifted significantly from 14.4% to 21.8%, eating into the company’s overall net income. Still, at $5.9B for the quarter, Intel is hardly one to complain.

Breaking things down on a group basis, many of Intel’s internal reporting groups have shrunk over the year-ago quarter, buoyed by a handful of other groups. Data center revenue was down 16% to $6.1B, with both platform volumes and ASPs dropping versus the year-ago quarter. Intel cites the competitive marketplace and “cloud digestion cycle” for the difference, though Ice Lake Server only now shipping probably doesn’t help things. 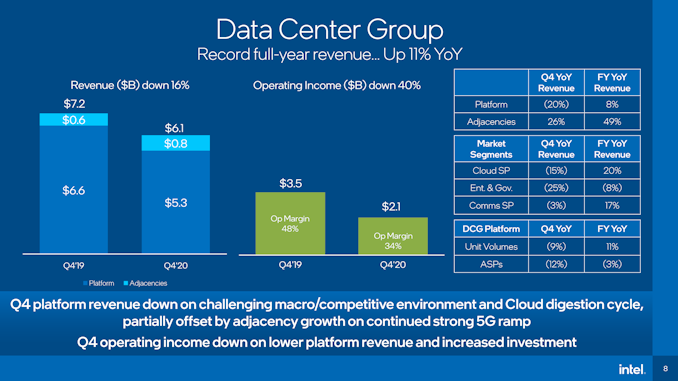 The story is similar for Intel’s IoT, memory, and programmable solutions (FPGA) groups, all of which are down versus Q4’19. Reasons there vary from lower demand for ioT and programmable hardware, to lower ASPs on memory. 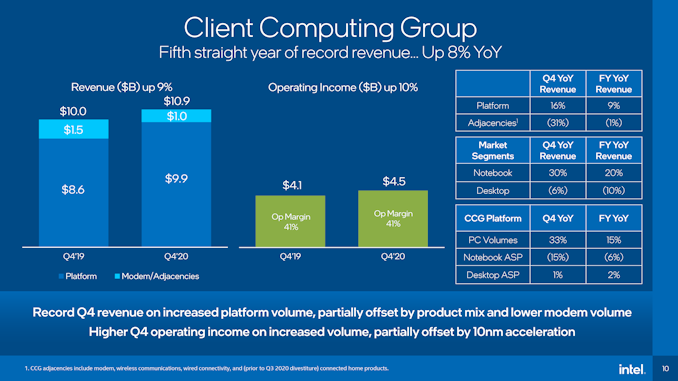 The big winner for the quarter is once again Intel’s client computing group, which was up 9% year-over-year to $10.9B of revenue for the quarter. Despite Intel’s efforts to pivot to being a data-centric company, the manufacturer’s client products remain the single largest piece of the company, so results here can make or break a quarter. In this case sheer demand for PC hardware in the face of the pandemic has driven revenue to new highs, with laptop volumes up 30% over last year. This was more than enough to offset both the drop in desktop sales – down 6% year-over-year – and a drop in laptop ASPs as consumer demand has shifted to Chromebooks and other lower-end hardware.

Shifting over to full year results, despite the initial uncertainty that came with the coronavirus outbreak, Intel ended 2020 beating expectations and setting revenue records for the fifth year in a row. Overall the company booked $77.9B in revenue for the year, 8% more than 2019. Intel’s overall net income didn’t get the same kind of kick – dogged by issues similar to their Q4 earnings – but the company is still going out on $20.9B in net income for the year, a 1% drop from 2019.

Gross margins for the entire year were 56%, reflecting the cost of Intel’s 10nm ramp-up and other fab matters. This was down 2.5 percentage points from 2019.

Looking at Intel’s individual business groups, for the year both the client and data center groups did very well for themselves. Client revenue was up 8% to $40.1B, coming in on the back of higher laptop sales.  And that growth really is all from laptops; desktop revenue was down for the year, and even “adjacencies” (Wi-Fi adapters and the like) were down a bit versus 2019.

Meanwhile data center revenue was up 11% to $26.1B, with Intel coincidentally reporting that they shipped 11% more data center chips than in 2019. On the whole, data center growth was driven by cloud and communication service providers, both of whom ramped up their hardware purchases to meet service demands during the pandemic, while enterprise and government sales dipped on the year. Meanwhile it’s interesting to note that on both a quarterly and yearly basis, Intel’s ASPs for the data center group are down; despite the volume, they face an increasing amount of competition. 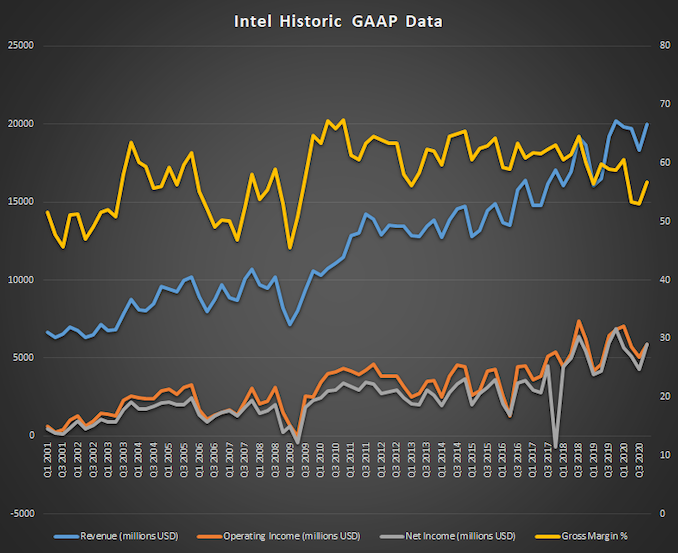 2020 was also a good year for Intel’s Mobileye and non-volatile storage groups. The automotive segment of the company continues to grow year-over-year (even with the pandemic), adding another 10% to its revenues for 2020. Meanwhile Intel’s storage business set a new record for revenue, growing on the backs of higher bit shipments as well as product launches like Intel’s “Crow Pass” 3rd generation Optane products for enterprise use.

Though we tend not to focus too much on Intel’s future earnings forecasts, their predictions for Q1’2021 warrant a quick look. After 5 years of record revenues, Intel is likely to be facing some tougher years ahead, and their projections reflect this. For Q1 the company expects revenue to drop 12% versus Q1’2020. Even excluding Intel’s NAND memory business, which is being sold off to SK Hynix, and Intel is still looking at a 6% revenue drop on a yearly basis. In particular, the company expects its revenues from its data-centric businesses to drop 15%, leaving client revenue to hold the line. 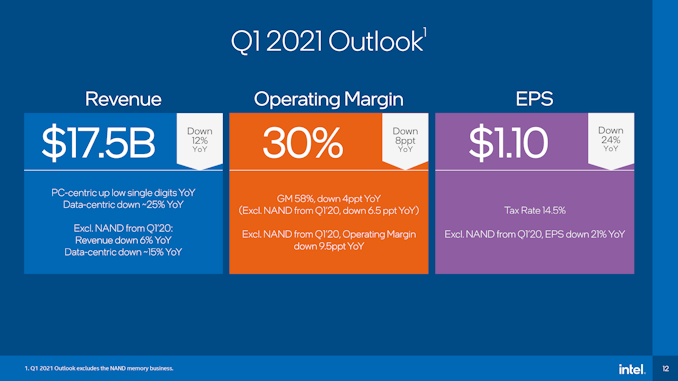 The good news for Intel is that their next generation of products are close-to or have begun shipping. Rocket Lake, Intel’s upcoming desktop CPU platform, is shipping for revenue this quarter. So are Ice Lake Xeons. And the products to come after those – Alder Lake for clients and Sapphire Rapids for servers – are already both sampling to customers.

The catch, however, is that Intel is still in the midst of their fab woes. Though the company is making progress on their 7nm process, all guidance from Intel right now suggests that this process won’t be ready at scale until 2023 – two years from now. In the interim Intel will be rolling out more 10nm SuperFin capacity and their Enhanced SuperFin will follow, but Intel won’t be making a big leap forward in fab tech for their products for the next couple of years. At least, not with internally-built chips.

Previously the company had stated that they would discuss outsourcing plans as part of today’s earnings release. But following the surprise hire of Intel veteran Pat Gelsinger to be the company’s new CEO, Intel has put a pause on that announcement. The company is still evaluating the use of external fabs and will have something to announce in the future, but just not today.

In the meantime, it sounds like Gelsinger has hit the ground running. To quote our own Dr. Ian Cutress “[It] sounds like Pat already has his foot in the door. Currently in a state of transition. Feb 15th is more the date of a complete Bob [Swan] exit.” Similarly, in Intel’s earnings call today, Gelsinger commented that he’s been examining Intel’s progress on 7nm manufacturing, and that he’s “pleased” with the progress made thus far. Consequently, with 2023 shaping up to be Intel’s big year for 7nm, Gelsinger also said that he expects the majority of Intel’s 2023 products to be fabbed internally.