Over the years, we've seen motherboard vendors have tried out new styles and aesthetics. Some have turned into successful ranges, such as ASRock's Taichi. MSI has announced a new model to its MAG Arsenal Gaming series called the Torpedo, which aims to sink the competition with a new color scheme similar to ASRock's Extreme series of boards. The MSI MAG Z590 Torpedo uses dark metallic blue throughout, including on the rear panel cover, heatsinks, and two of the four memory slots. It also includes integrated RGB LEDs built into the chipset heatsink and has a follows a militaristic theme. 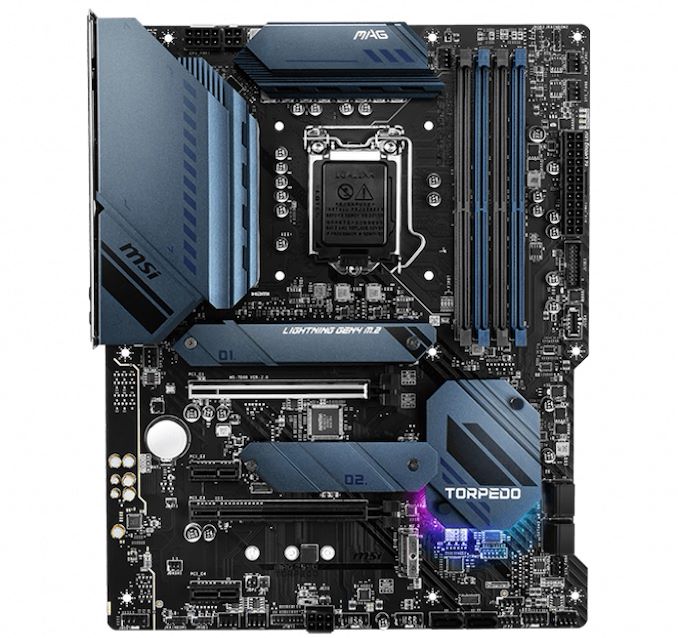 On the rear panel is one USB 3.2 G2x2 Type-C, one USB 3.2 G2 Type-A, four USB 3.2 G1 Type-A, and two USB 2.0 ports. The board uses dual RJ45, coming via an Intel I225-V 2.5 GbE controller, and the other one by an Intel I219-V Gigabit one. A total of five 3.5 mm audio jacks and S/PDIF optical output are driven by a Realtek ALC4080 HD audio codec. In contrast, a DisplayPort and HDMI video output pairing allows users to benefit from Intel's integrated HD graphics. Finishing off the rear panel is a small but handy BIOS Flashback button.