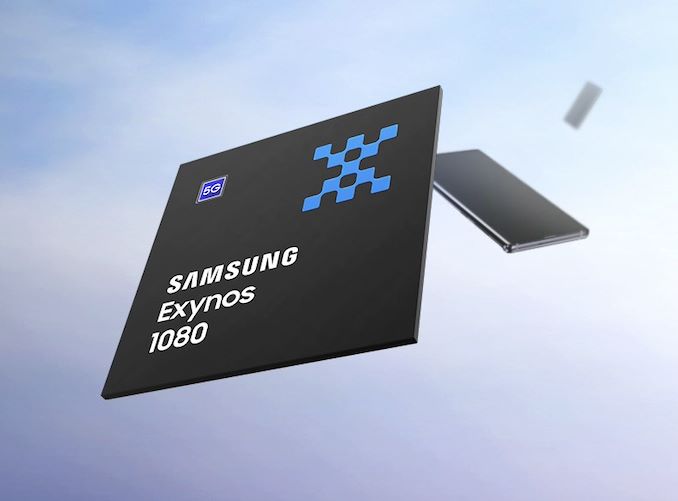 Today Samsung LSI announced the new Exynos 1080 SoC, a successor to last year’s Exynos 980. This year’s 1080 is seemingly positioned a little above the 980 in terms of performance as we’re seeing some quite notable gains in features compared to the 980. It’s to be remembered that this is a “premium” SoC, meaning it’s not a flagship SoC, but it’s also not quite a mid-range SoC, fitting itself in-between those two categories, a niche which has become quite popular over the last 1-2 years.

The new SoC is defined by having a new 1+3+4 CPU configuration, as reasonably large GPU, and full 5G connectivity integrated, and is the first publicly announced SoC to be manufactured on Samsung’s new 5LPE process node.

On the CPU side of things, this is the first time we’ve seen Samsung adopt a 1+3+4 CPU configuration, now adopting the Cortex-A78 architecture on the part of the performance cores. One core is clocked at 2.8GHz while the three others are running at 2.6GHz. Qualcomm had first introduced such a setup and it seems it’s become quite popular as it gives the benefit of both performance and power efficiency. The four big cores are accompanied by four Cortex-A55 cores at 2.0GHz.

On the GPU side of things, we’re seeing a quite large jump compared to the Exynos 980 as Samsung is now not only moving onto the new Mali-G78 microarchitecture, but is deploying double the number of cores. It’s possible that previous performance of these “premium” tier SoCs wasn't as well received as there was a large gap in performance compared to their flagship SoC counterparts, so Samsung employing a much larger GPU here is quite welcome, and still leaves room for a much larger configuration for their flagship SoC, which has yet to be announced.

Samsung now also includes a new generation NPU and DSP in the design, and quoted machine-learning inference power of 5.7TOPs which is again quite a sweet-spot for such an SoC.

The new modem now is capable of both 5G NR Sub-6 frequencies as well mmWave, something which was lacking in the Exynos 980. Samsung’s decision to deploy mmWave here is interesting given that outside of the US there’s very little deployment in terms of network coverage as sub-6GHz is being prioritised. Samsung adding this in in what’s supposed to be a more cost-effective SoC means that they’re actually expecting it to be used, which is going to be very interesting.

Multi-media wise, the specifications listed for the SoC show that it actually cut down on the MFC (Multi-Function Codec) decoder and encoder capabilities as it’s now only capable of 4K60 instead of 4K120 in the last generation – maybe a further cost optimisation.

The camera ISP capabilities have been improved, supporting now single camera sensors up to 200MP, and dual-sensor operation up to 32+32MP.

The most exciting thing about the SoC is its transition from an 8LPP DUV process to the new 5LPE EUV process. This is Samsung LSI’s and Samsung Foundry’s first announced 5nm chip which is going to garner a lot of attention when it comes to comparisons made against competitor SoCs on TSMC’s 5nm node. I do expect the Samsung process to be less dense, but we’ll have to wait out and see the actual performance and power differences between the two nodes.

Last year I had noted that the Exynos 980 looked like an extremely well balanced SoC and we did see it employed by third-party vendors such as VIVO, as well as more Samsung Mobile devices. The new Exynos 1080 look to be even stronger and solid in terms reaching a balance between performance and features and still trying to optimise things for cost.