The set of power management features supported by the 980 PRO is the same as what the 970 generation offered. The active state power levels have been tweaked and the highest power state can now reach 8.49W: definitely high for a M.2 drive, but not as problematic as the 10.73W declared by the Phison E16-based Seagate FireCuda 520. Power state transition latencies for the 980 PRO have also been adjusted slightly, but the overall picture is still a promise of very quick state changes.

We report three idle power measurements. Active idle is representative of a typical desktop, where none of the advanced PCIe link power saving features are enabled and the drive is immediately ready to process new commands. Our Desktop Idle number represents what can usually be expected from a desktop system that is configured to enable SATA link power management, PCIe ASPM and NVMe APST, but where the lowest PCIe L1.2 link power states are not available. The Laptop Idle number represents the maximum power savings possible with all the NVMe and PCIe power management features in use—usually the default for a battery-powered system but rarely achievable on a desktop even after changing BIOS and OS settings. Since we don't have a way to enable SATA DevSleep on any of our testbeds, SATA drives are omitted from the Laptop Idle charts.

We haven't sorted out all the power management quirks (or, less politely: bugs) on our new Ryzen testbed, so the idle power results below are mostly from our Coffee Lake system. The PCIe Gen4 drives have been tested on both systems, but for now we are unable to use the lowest-power idle states on the Ryzen system.

Since AMD has not enabled PCIe 4 on their Renoir mobile platform and Intel's Tiger Lake isn't quite shipping yet, these scores are still fairly representative of how these Gen4-capable drives handle power management in a typical mobile setting. Once we're able to get PCIe power management fully working crash-free on our Ryzen testbed, we'll update these scores in our Bench database. 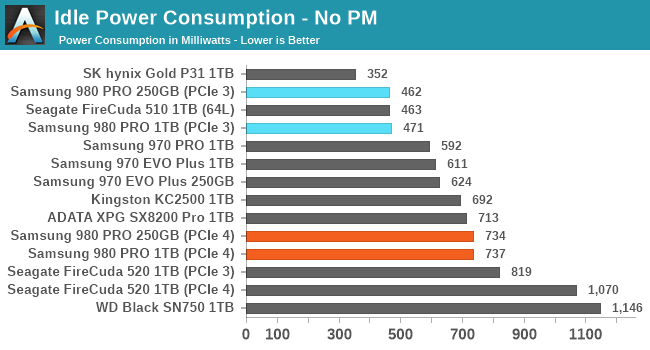 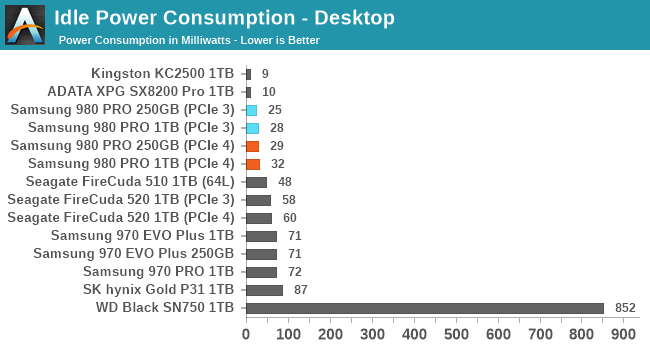 The desktop idle power draw for the 980 PROs is less than half what we saw with the Samsung 970 generation drives, but not quite as low as the Silicon Motion SM2262EN achieves. On our Coffee Lake system, the 980 PROs are both able to achieve single digit milliwatt idle power. 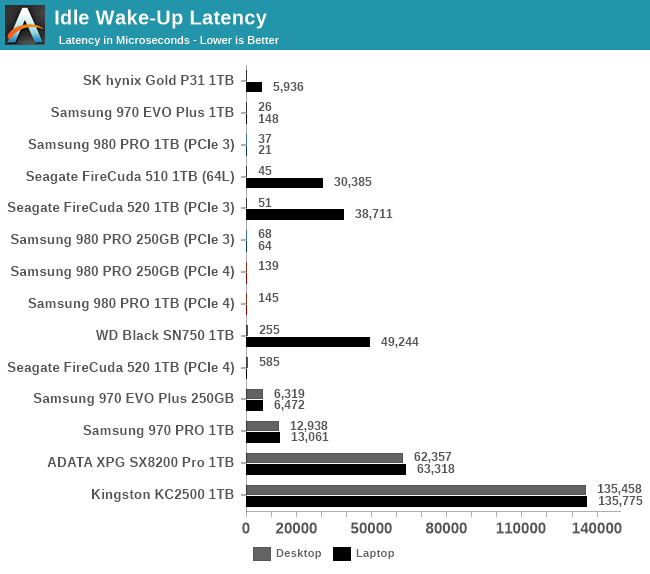 The idle wake-up times for the 980 PROs are all very quick, though waking up from the desktop idle state to Gen4 speed does seem to take longer than reestablishing a Gen3 link. Some of the previous-generation Samsung drives we tested exhibited wake-up latencies of several milliseconds, but so far the 980 PRO doesn't seem to do that and aggressively using the deepest idle states achievable won't noticeably hurt system responsiveness.