The OnePlus 8 and 8 Pro feature brand new display panels that represent the best in their respective categories. Since the OnePlus 7 Pro, the company has been able to source amongst the best and cutting-edge panels from Samsung, and the OnePlus 8 Pro is no different. Using the latest emitter technologies, a 1440p resolution and a 120Hz refresh rate, there’s very little to be wished for in the display of the new flagship.

The OnePlus 8 has an equally excellent screen, however with its 90Hz and 1080p resolution is just shy of having the best specifications. 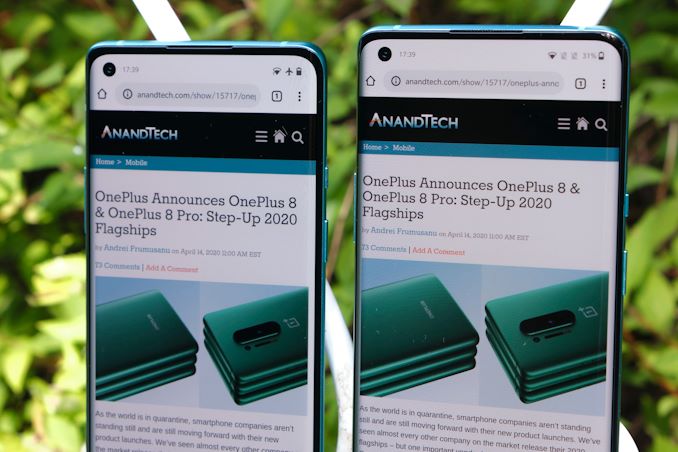 We move on to the display calibration and fundamental display measurements of the OnePlus 8 and OnePlus 8 Pro screens. As always, we thank X-Rite and SpecraCal, as our measurements are performed with an X-Rite i1Pro 2 spectrophotometer, with the exception of black levels which are measured with an i1Display Pro colorimeter. Data is collected and examined using Portrait Display's CalMAN software. 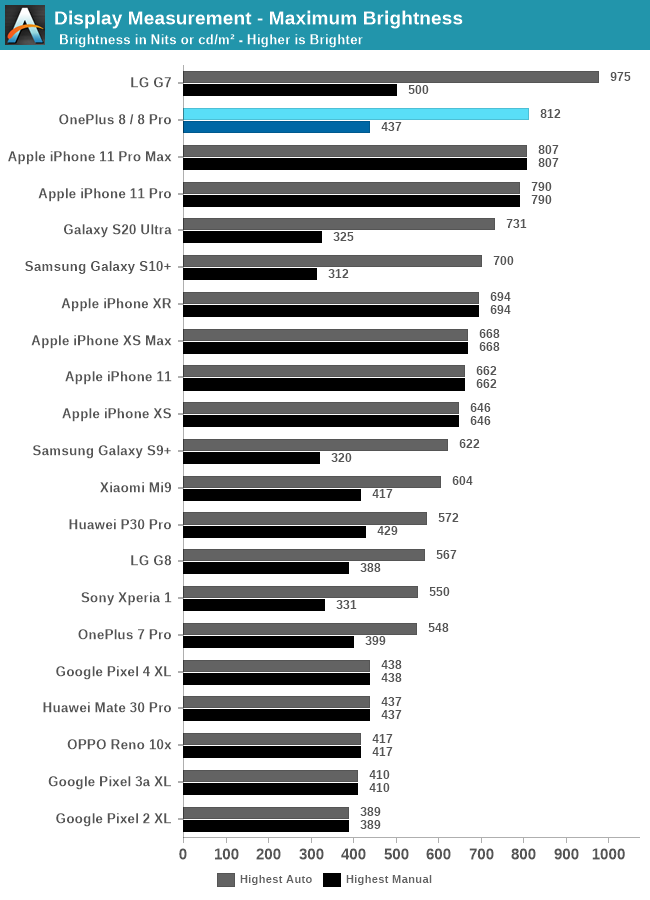 In daylight, both phones have excellent brightness reaching up till around 800nits on full-screen white content, representing the best results we’ve measured on an OLED panel, just shy of the LG G7’s ultra-bright LCD screen. Under manual brightness the phone reach about 430 nits.

On the regular OnePlus 8, the phone has good colour temperature although the reds are only every so slightly above a perfect grade. The display’s gamma curve however is a tad more off with too high a total gamma of 2.28, making tones appear darker than they should be. This seemingly is especially present in the lower intensity tones as the phone clips a lot of content to black or near-black.

The zig-zagging measurement results here are pointing out to some sort of artefac of the screen calibration which is a bit abnormal, but something we did see on occasion happen on some devices in the past.

On the OnePlus 8 Pro, the gamma results are significantly better and the phone is able to track nearer to the optimal 2.2 target. The 8 Pro’s biggest issue though is colour balance as in the natural profile things are far too much dominated by reds – or rather say a lack of blue. The average colour temperature ends up at 6216K and pure whites end up in a quite disappointing 6155K which is pretty much immediately visible on the phone. 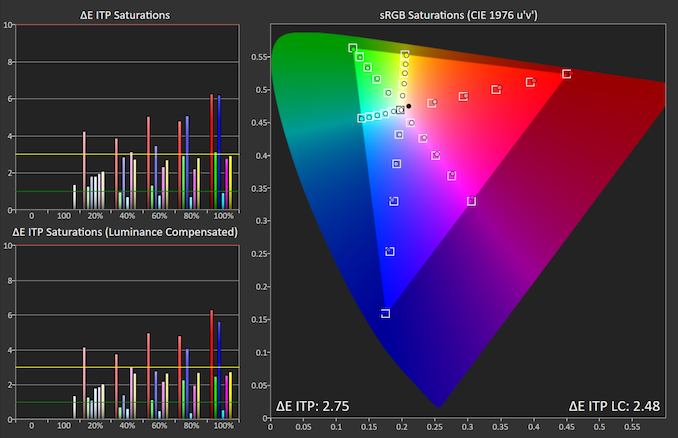 sRGB saturation accuracy of the OnePlus 8 is quite good and we end up with an overall dEITP of 2.75 which is within the imperceptible margin for most users. 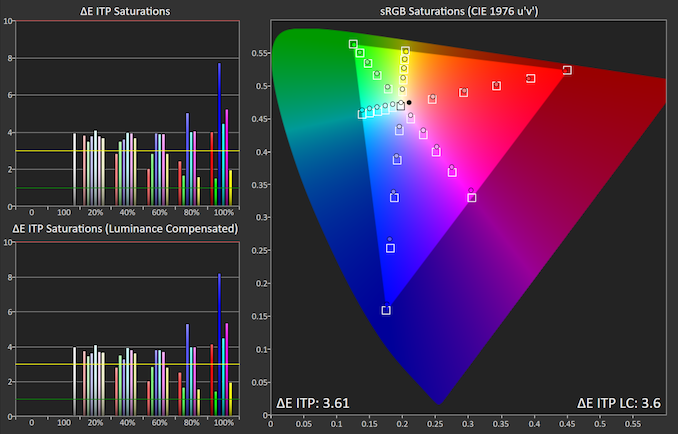 The OnePlus 8 Pro’s colour accuracy isn’t nearly as good. We’re seeing worse results across the board and when looking at the gamut results this seems to be due to too weak blue tones, shifting the whole cyan-blue-magenta saturations from where they should be. The most noticeable effect of this is again in whites where they’re far too warm. 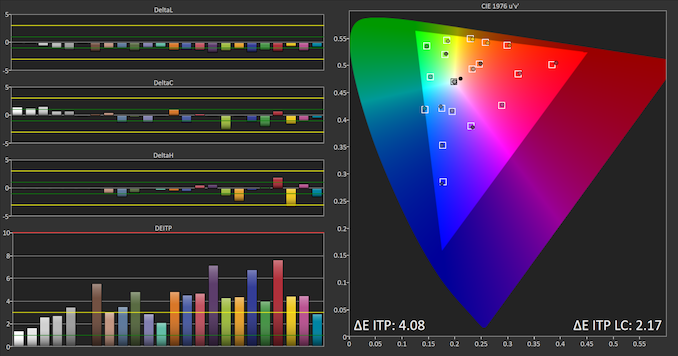 In the Gretag MacBeth colour chart with most common tones and skin colours, the OnePlus 8 fares well in terms of its colour accuracy, only being more handicapped by its higher gamma target which makes all tones appear darker than they should be. Overall, it’s still an excellent result for the phone. 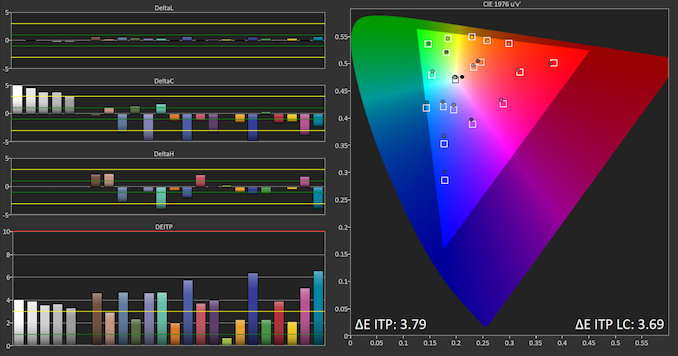 The OnePlus 8 Pro nails the luminance component of the test patches, however it has more significant hue and saturation deviations that more easily stand out to the eye

Both the OnePlus 8 and 8 Pro have excellent displays. The 90Hz and 120Hz refresh rate capabilities of the phones is what really makes them stand out in everyday usage. In terms of colour accuracy, things aren’t at all perfect. The OnePlus 8 has issues with the gamma curves, having a too high target resulting in too dark tones, especially at the lower intensity levels where things can clip to black.

The OnePlus 8 Pro’s issues are more severe as whilst its gamma is good, it has more noticeable problems with some hues and especially saturations in the blue spectrum. The biggest issue is its far too warm colour temperature with whites falling in at only 6150K. OnePlus likes to brandish awards regarding the device’s screen accuracy, but legitimacy of such figures always come in question as such cherry-picked results never match proper independent analysis. Nevertheless, you can set up a manually adjusted colour temperature that will solve the main negative about the screen.