Looking at MSI's entry-level Z490 model, the MSI Z490-A Pro which is designed for more professional users and content creators, it's interesting to see that MSI has included a single Realtek 2.5 G NIC. Also included are two PCIe 3.0 x4 M.2 slots, six SATA ports, and support for up to 128 GB of DDR4-4800 memory across four slots. 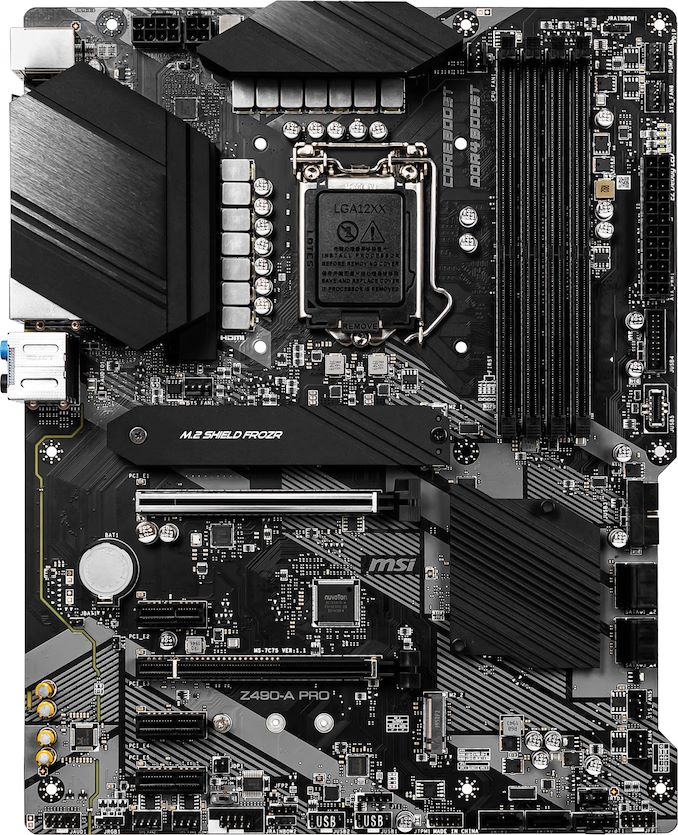 Similar to the aesthetics of the MSI X570-A Pro, the overall design of the MSI Z490-A Pro has been revamped with its beefier 12-phase power delivery. It drops the integrated RGB LEDs of other MSI Z490 models and goes for a more subtle and professional design with black heatsinks, and a black and grey accented partnered PCB. Its core feature set includes two full-length PCIe 3.0 slots which operate at x16+4, with three PCIe 3.0 slots. For memory, there are four slots with support for up to DDR4-4800, with a maximum capacity of 128 GB.

In terms of storage support, there are two PCIe 3.0 x4 M.2 slots, with four right-angled SATA, and two straight angled SATA ports bringing the total of SATA ports to six. Only the top M.2 slot has a heat sink included, with the six SATA ports garnering support for RAID 0, 1, 5 and 10 arrays.

On the rear panel is a basic set of IO, with one USB 3.2 G2 10 Gbps Type-C, two USB 3.2 G1 Type-A, and two USB 2.0 ports. There is a Realtek RTL8125B 2.5 G powered Ethernet port and a pair of video outputs consisting of a DisplayPort and HDMI output. For onboard audio, there is five 3.5 mm audio jacks and S/PDIF optical output controlled by a Realtek ALC1200 HD audio codec, with a single PS/2 keyboard and mouse combo port for users with legacy peripherals.

Overall the MSI Z490-A Pro caters more to professional users but includes more premium networking with a Realtek 2.5 G Ethernet controller which is a bump over previous versions of the A Pro. The two full-length PCIe 3.0 slots support dual AMD Crossfire graphics card setups, with a decent looking power delivery on a budget-focused model. MSI hasn't provided pricing information as of yet.