For the launch of Intel’s 10th Gen Comet Lake desktop processors, MSI will be launching no fewer than eight new models. MSI has a model to cater to most price points including its familiar MEG, MPG, and MAG series, which are determined by feature set, controllers, with options ranging from mini-ITX all the way to E-ATX. One very notable thing MSI has done is add Realtek 2.5 G Ethernet to every model in its Z490 product stack, from top to bottom. I can remember a meeting I had with members of the MSI design and marketing team couple of years ago where they asked for my input in London, and I said "You need to focus more on networking support" - It looks like MSI has listened.

Starting with the most extravagant Z490 offering from MSI, the flagship MEG Z490 Godlike, MSI has pushed the boat out once again amalgamating its impressive and flash RGB inspired look, with a high-quality feature set, a larger updated OLED display, and more USB connectivity than you can shake a stick at.

Following on from previous iterations of its flagship bearing Godlike brand, the MSI MEG Z490 Godlike has a premium controller set with two Intel Thunderbolt 3 Type-C ports on the rear panel. With a strong networking array consisting of an Aquantia AQC107 10 G, and Realtek RTL8125B 2.5 G Ethernet controller pairing, and an Intel AX201 Wi-Fi 6 wireless interface, MSI has gone all-out with its latest and greatest model designed for desktop. 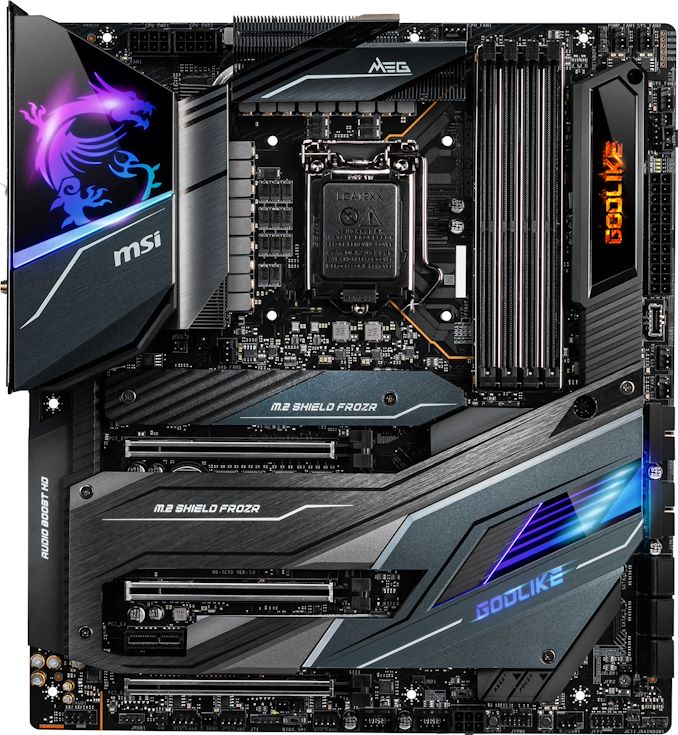 The MSI MEG Z490 Godlike supports up to DDR4-5000 memory, with four slots and a maximum capacity of up to 128 GB. Adding into its claim as one of the top Z490 models, it advertises a 16-phase power delivery for the CPU with a stacked fin array heatsink designed to keep it cool.

Design-wise, the new Z490 Godlike has a newly implemented OLED panel takes center stage, which MSI is calling Dynamic Dashboard II. It also supports RGB and custom GIF files, with plenty of RGB LEDs integrated around the board, with support for MSI's Mystic Light RGB software. Offering  up to three onboard PCIe 3.0 x4 M.2 slots, MSI includes its PCIe 3.0 x4  Xpander-Z Gen4 S M.2 add-on card allowing for a further two PCIe 3.0 M.2 drives to be used. The Godlike also has six SATA ports with support for RAID 0, 1, 5, and 10 arrays.

On the rear panel is an impressive array of IO which is spearheaded by two Thunderbolt 3 USB Type-C, two USB 3.2 G2 Type-A, four USB 3.1 G2 Type-A, and two USB 2.0 ports. Also present are two Ethernet ports with one controlled by an Aquantia AQC107 10 G, and the other by a Realtek RTL8125B 2.5 G controller. This includes 2x2 antenna connectors for the Intel AX201 Wi-Fi 6 wireless interfaces, with five 3.5 mm and S/PDIF optical output powered by (INSERT), and handily located Clear CMOS and BIOS Flashback buttons.

Always offering an impressive and extravagant take on whatever chipset it is launched on, the MSI MEG Z490 Godlike on paper looks to cement itself as one of the most premium models designed for enthusiasts. Not only for performance users, but for content creators with dual Thunderbolt 3 Type-C, and lots of high-speed USB connectivity. All of this will come at a cost, with MSI not currently providing us information with pricing at this time.