Although the peak CPU performance of the two Galaxy S20 SoCs isn’t all that different, what also matters is how the software decides to use that computing power. We’ve seen in the past that the DVFS and scheduler settings can have a very big impact on everyday performance of a device, sometimes even more so than the actual hardware. We’ve already quickly visited the Snapdragon 865 in the Galaxy S20 Ultra a few weeks ago, and we were very impressed by the performance and efficiency of the device. Now what remains to be seen how the Exynos 990 variant of the phone behaves.

Also at play here is the phone’s 120Hz display refresh mode. Samsung gives the option to choose between 60Hz and 120Hz in the display settings, with the latter naturally giving you more fluidity in applications. Beyond that, there’s also the matter of the device’s battery modes, in particular the difference between the default “Optimized” and “Performance” modes.

On past Samsung devices we’ve always tested the phones in their performance modes, as I hadn’t really noted much of a battery life difference between the two modes – and naturally we want to experience the full performance of a flagship device anyhow. This is still valid for the Snapdragon 865 Galaxy S20s, however the Exynos 990’s Performance mode is behaving weirdly and incurs quite a large power penalty, to the point that I would strongly recommend against using it. So the most practical comparisons for most people will be the Snapdragon Performance mode figures (P) against the default Exynos figures, at least for the S20 and at least for the current firmware versions. 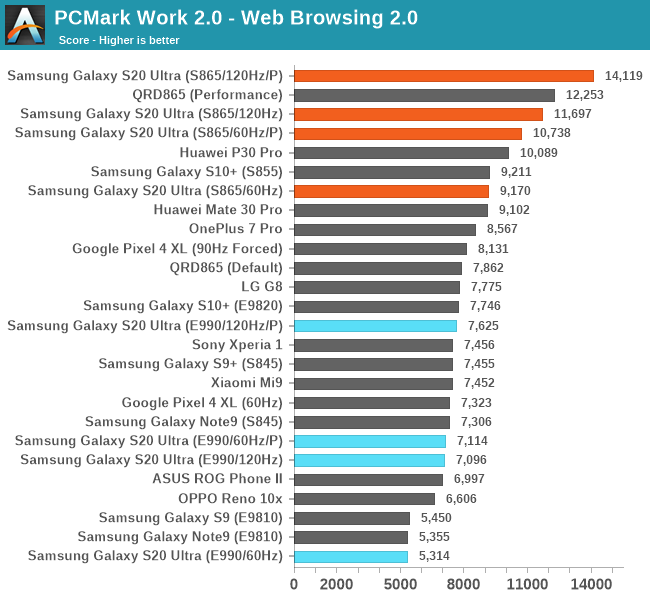 Starting off in the web browsing test in PCMark, there’s a very clear performance difference between the two phones, however this isn’t just because the Exynos 990 somehow sucks, but because there’s a weird software configuration on the S20 Ultra.

Oddly enough the web browsing test is the most sensitive to a DVFS, scheduler, or Android task management setting difference between the Exynos S20 Ultra and the S20+. The latter here performs significantly better for some reason. 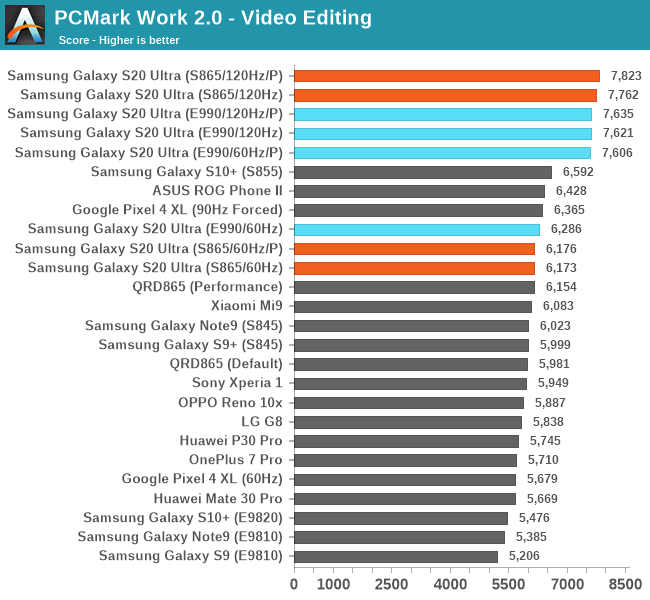 In the video editing test, the differences are minor, and in general the 120Hz results of the phones are clearly different to the 60Hz results. The test is generally V-sync limited here and isn’t all that representative of workloads anymore as most phones ace it nowadays. It’s again the Exynos in the 60Hz Performance mode which stands out of the crowd, getting better scores due to its extremely aggressive scheduling. 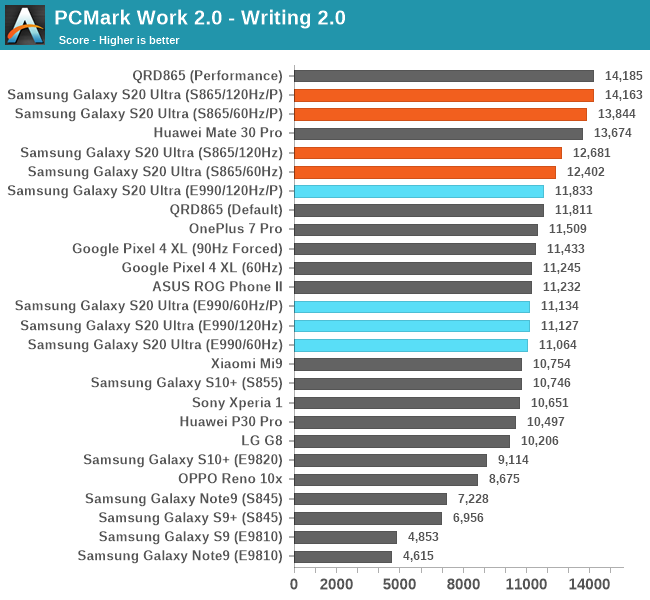 The Writing subtest is amongst the most important in the suite and most representative of everyday performance. Here the Snapdragon 865 is ahead of the Exynos by a good margin, and falls in line with the best scores we saw on the QRD865 in Performance mode. The Exynos, generationally, is also posting a good improvement over the Exynos 9820 of the Galaxy S10. 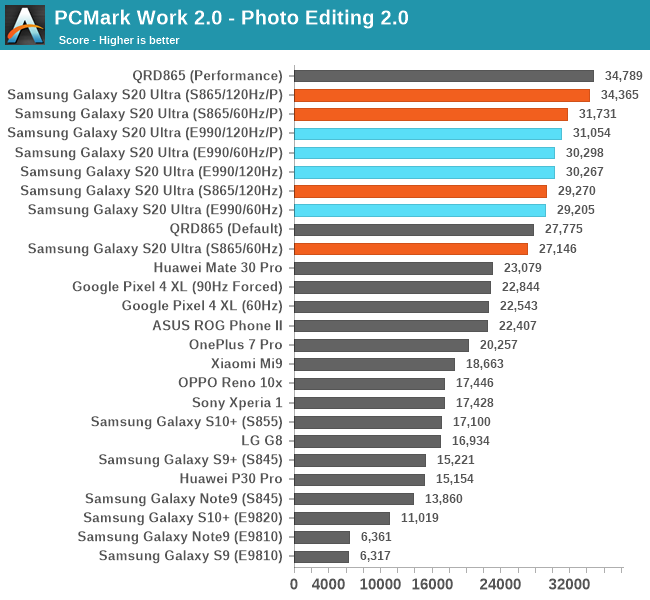 It seems SLSI has finally resolved their performance issues of their Renderscript drivers – either that, or the new Mali-G77 GPU is doing significantly better than the G76 in these workloads. Both variants of the S20 phones here clearly ends up with top performance scores, leading the pack ahead of all other Android devices. 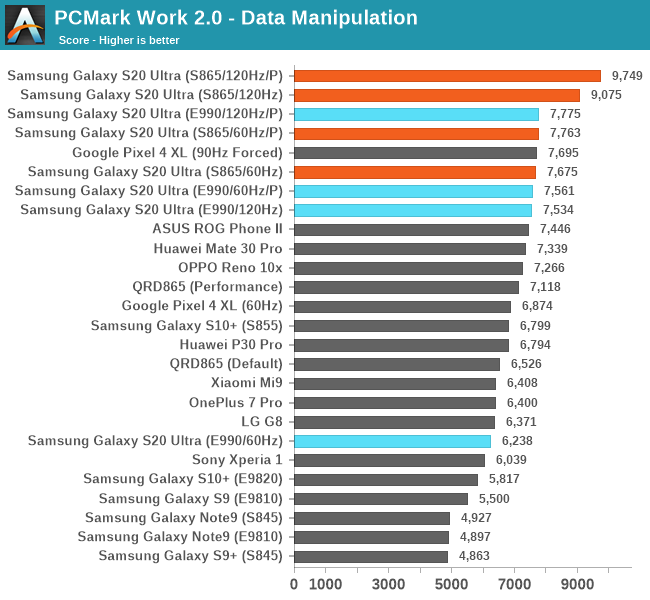 In the Data Manipulation test, the scores are again quite good for both variants of the phone, however the Snapdragon 865 model does lead here, especially in the 120Hz mode. In fact, in this test it fares quite a lot better than the QRD865. 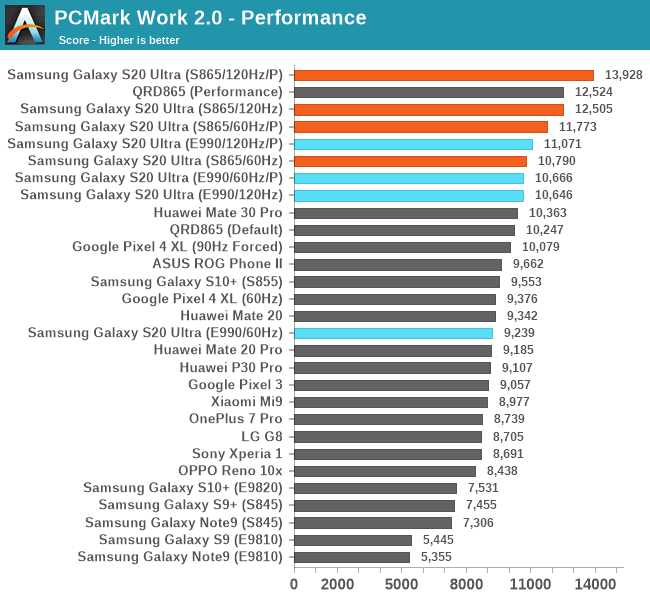 In the overall scores, both variants of the S20 Ultra are top performers. As a reminder, the Exynos 990 S20+ fared a bit better than our Ultra unit for some reason, but we’re opting to show the two Ultra scores here for best apples-to-apples between phones. 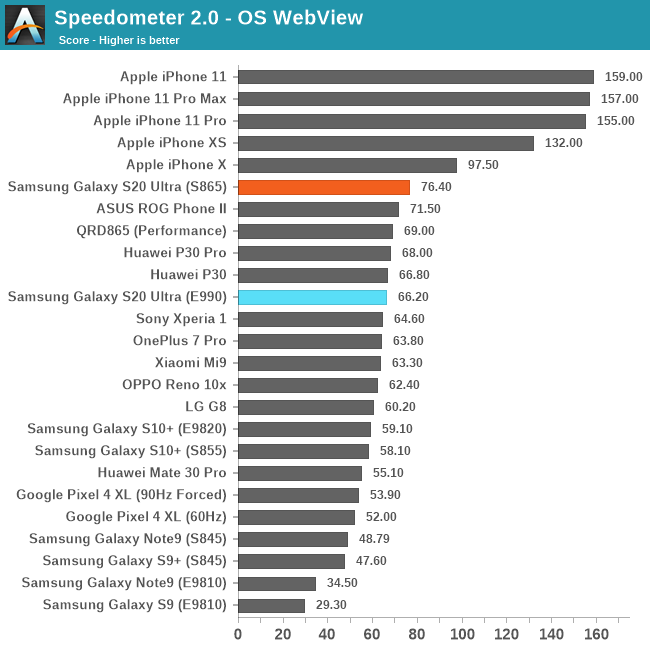 In Speedometer 2.0, performance of the Exynos 990 chip isn’t all that much better than its predecessor, only sporting 12% increase. The Snapdragon variant on the other hand is 31% ahead of its S10 sibling, also posting notably better than what we had measured on the QRD865. It’s still far away from what Apple’s microarchitectures are able to achieve – the combination of strong CPUs along with better optimized browser JS engines is key to the iPhone performance. 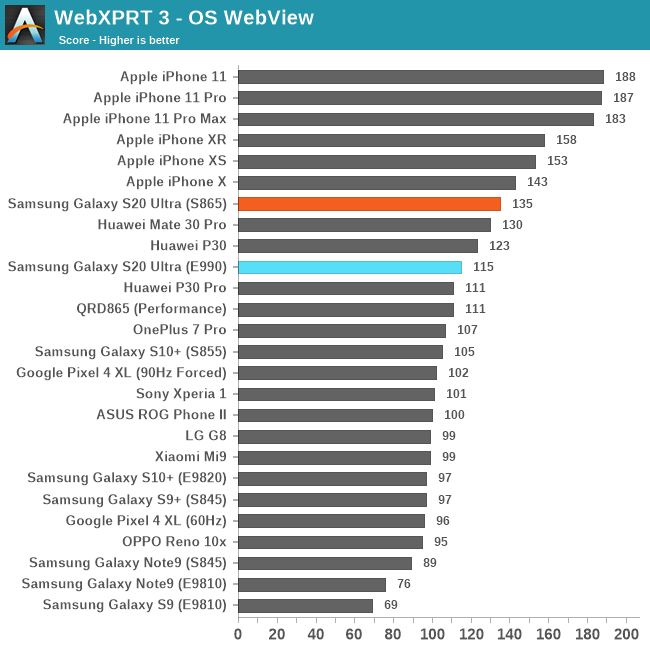 In WebXPRT, the situation again favors the Snapdragon 865 variant of the phone by 17%. 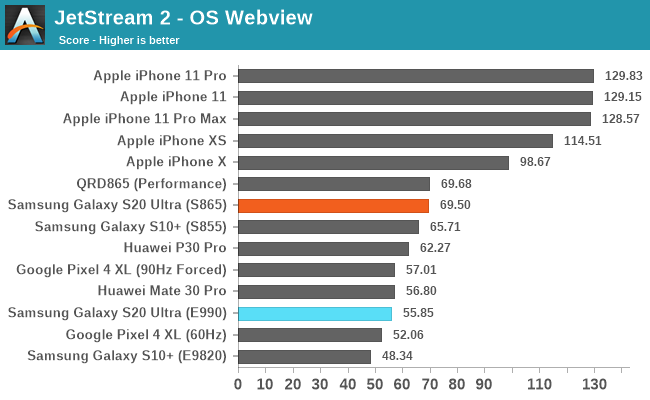 Finally, in JetStream 2, the extend its lead to 24% which is quite large. Samsung’s custom CPU cores are particularly weak here and that’s likely due to the high instruction throughput of the test. I had found out their microarchitecture is quite weak with larger code sizes, for example unrolling loops will greatly handicap the performance of the Exynos CPUs whilst the Arm cores essentially see no big differences.

The biggest improvement is user experience though it’s the 120Hz display mode. It’s just a fantastic addition to the phones, and really makes scrolling content that much more fluid. Along with the 240Hz touch input sampling rate of the phones makes these by far the most responsive and smooth experiences you can get on a mobile phone today.