In round 2 of the chipset wars, nVidia performed a massive transformation of the nForce3 chipset, moving from the pedestrian nForce3-150 to the leading-edge nForce3-250 family in April. As good as nForce3-250 is, however, users knew that more was on the way from VIA, SiS, and nVidia themselves. The CK8 chipset was first displayed at Computex in June. With the successful launch of the nForce3-250 family, it was clear that nVidia had every intention of upping the ante in the Athlon 64 market with both PCI Express and Dual Video cards on the single-chip CK8. 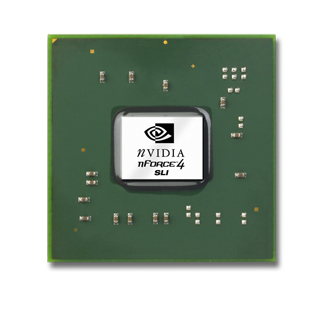 In the four months since we first saw CK8, a lot has happened in the computer industry. Intel launched their new Socket 775 processor and 925X/915 chipset and received a less than enthusiastic reception from enthusiasts. The yawns from the computer community have translated into very poor retail sales for the new Intel platform. Promised performance updates to the new Intel architecture, which were supposed to drive sales of the new 775 platform, have been scaled back, with rumors that mainstream 1066 parts now are not expected until the middle of 2005.

AMD has continued their performance push, with the introduction of the dual-channel 939 on June 1, and today, AMD extends their CPU line at the top with the FX55 and 4000+ processors. Meanwhile, Intel's top 3.6Ghz CPU is finally appearing in the retail channel more than 3 months after introduction. While Intel pioneered the move to 90nm, the transition to 90nm has been anything but smooth for Intel, with concerns about heat and the difficulty of moving the 90nm process to the top performance end of the Intel line. AMD has just introduced their first 90nm Athlon 64, which generally appears to avoid the problems that Intel encountered. However, we will not really know whether or not the shrink is a complete success for AMD until we see the top Athlon 64 processors in 90nm.

All of these developments have quickly changed the landscape of the computer market. In the retail market, AMD has moved from a small percentage of the total retail market to even with Intel in the last couple of months. Computer users who scoffed at the idea of buying an Athlon 64 computer a few months ago are now shopping for Athlon 64 computers. Also VIA, which had problems with the PCI/AGP lock in the initial launch of the K8T800 PRO, has fixed these issues with shipping chipsets. VIA also demonstrated a working K8T890 chipset a few weeks ago that features PCI Express and the promise of Dual Video cards in a future K8T890 Pro chipset. Thus far, there are no retail boards based on the K8T890 that have appeared in the market, but VIA promises that they will be here "soon".

All of these developments have changed the landscape for nVidia. In other words, the stakes for CK8 have changed since June. A winner with CK8 would change nVidia from an AMD chipset maker to one of the major players in the chipset market. nVidia seems keenly aware of what is involved and they have pulled out a whole slew of features to win you over if you're looking for an Athlon 64 motherboard.