The new A-Series architecture means to represent a reset for Imagination’s product offerings, representing a bright new future for the company. The new GPU IP is certainly impressive in terms of the PPA metrics that it promises to achieve, and if realized, it does have ramifications for the wider industry and the competitive landscape.

But even if the A-series can deliver on all of Imagination's promises, the company can't stop there. The competition is continuing to refine and improve their designs, and so must Imagination. To that end, along with today's announcement of the A-series, Imagination is also publishing a very broad roadmap for the next few years, outlining the upcoming GPU generations and their expected performance gains. All of this is especially important for SoC designers, who want to know what's coming down the pipe before making the effort to switch IP vendors. 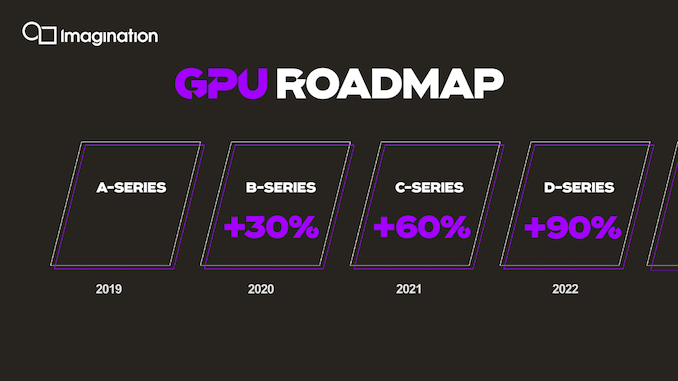 Imagination’s roadmap following the A-Series is seemingly very aggressive, promising yearly updates going forward, with large annual performance increases of 1.3x, or a 30% yearly compound annual growth rate. This is a much bigger goal than we’re used to historically, but it’s very much in line with the pace of progress we’ve seen from some vendors in the past, or even what Apple has managed to recently achieve over the last two generations. 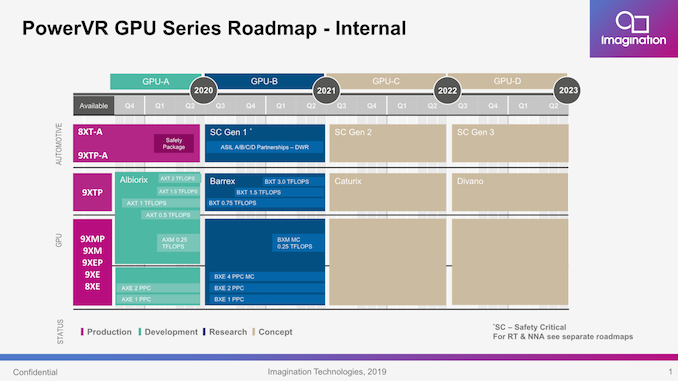 For the A-Series, Imagination has adopted a public announcement schedule more similar to Arm’s, meaning that the A-Series has already been finished and licensed out to customers, with SoCs being designed and prepared to hit the market for 2020 – we’re assuming the latter part of 2020.

The B-Series is already well under way in terms of development and projected to be completed by next summer if the roadmap is to be taken as an accurate schedule, so at least Imagination has a strong path forward.

What’s important here for Imagination, is managing to actually achieve design wins for the new GPU IP in meaningful higher volume sockets. In terms of possible customers, it’s an increasingly small list, with most of them being the smaller Chinese SoC vendors such as RockChip, Unisoc (formerly Spreadtrum). Samsung is an unlikely client given their plans with AMD as well as custom GPU development, unless there happens to be some opportunity in the low and mid-range segments. HiSilicon likely is tied to Arm, if their plans of a custom GPU don’t pan out. This leaves MediaTek as one of the bigger clients, with the most opportunity and likelihood of adopting the A-Series. Holding onto more MediaTek SoC wins, instead of having them flip-flop between PowerVR and Mali, would be a big win for Imagination and its GPU group. With MediaTek now having re-entered the flagship SoC market, it seems like a very good match.

The wider semiconductor industry is said to be in an architecture revival phase, realizing the need for stronger designs in order to make up for decreasing yearly improvements in process performance. Imagination’s A-Series here seems to be a perfect example of such a revitalization, bringing with it massively impressive generational jumps. If the improvements pan out in practice, I do believe it could be a turning point for the company, and in the future we indeed might look back on it as being the most important launch in the company’s mobile history.