Always a key metric on a mobile device, the Dell XPS 13 has historically offered excellent battery life. With the latest 10 nm processor, expectations are high. Dell keeps the battery capacity similar to the non-convertible model, officially rated for 51 Wh and with 50 Wh usable. Considering the small size of the device, the battery capacity is quite good, although a step down from the 60 Wh seen on the older models such as the 9360. But, battery capacity is only one part of the equation, with platform efficiency being the other.

To see how the XPS 13 7390 2-in-1 performs, we standardize the display brightness to 200 nits, and run it through three tests. The light test is very light web browsing. Our 2016 Web test is much more demanding and pulls a lot more CPU power into the equation. Finally, we test for video playback, which can often be the longest runtime due to the offloading of the video decode. 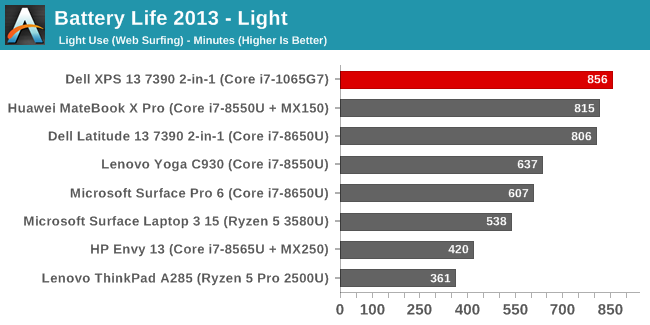 The XPS 13 7390 gets off to a strong start. Despite the larger physical display of the 16:10 13.4-inch panel, and the smaller battery capacity than some of the competition, the XPS 13 jumps to the top of the chart with over 14 hours of runtime on this light workload. 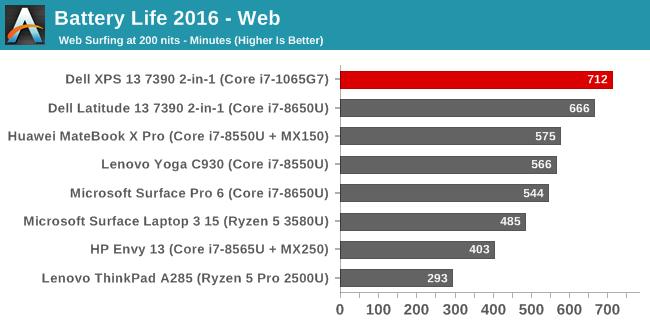 Our more demanding test always makes a big impact on efficient devices, forcing them to use the CPU a lot more and therefore using more power. But the Ice Lake platform does very well, maintaining its standing at the top with just a hair under 12 hours of runtime. Very impressive. 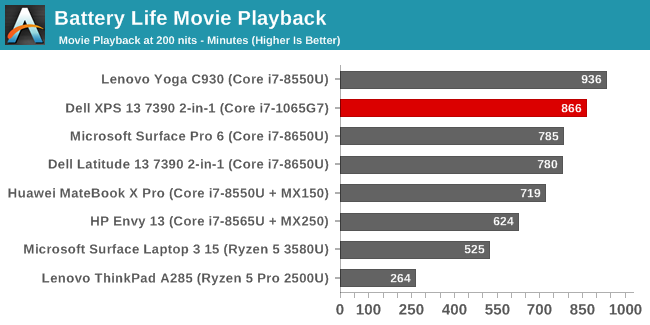 As we've seen in laptops over the last few years, Intel's now last-generation integrated UHD 620 GPU offers some spectacular battery life under video playback, as evidenced by how much longer these devices last in our video playback test, versus the more mixed workloads of our light web test. However things are a lot closer for the XPS 13; the Iris Plus (G7) GPU-equipped laptop only achieved ten minutes additional battery life over the light test. One device is not enough to make a definitive conclusion, but early indicators are that the norms for power consumption have changed on Intel's chips, and that movie playback and other ultra-light workloads that stress the GPU more than the CPU no longer hold a big advantage in power consumption. That being said, the device still achieved excellent battery life in this test, only being beaten by one other modern Ultrabook we’ve tested. 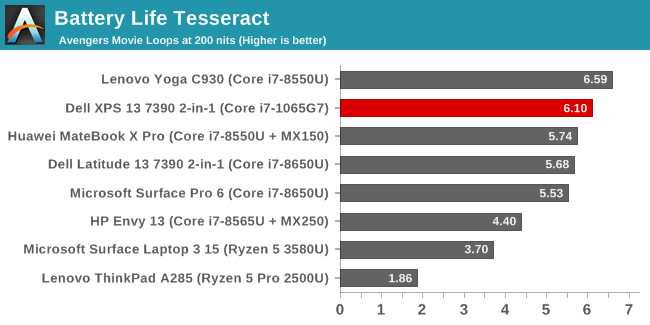 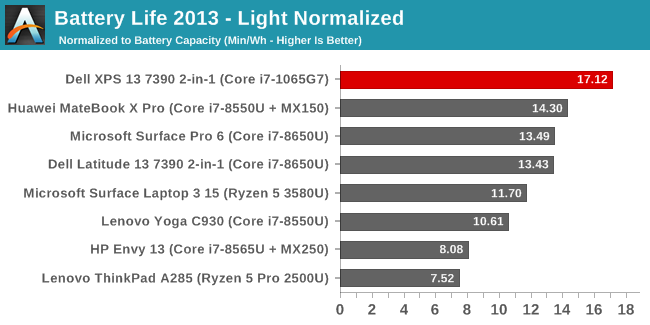 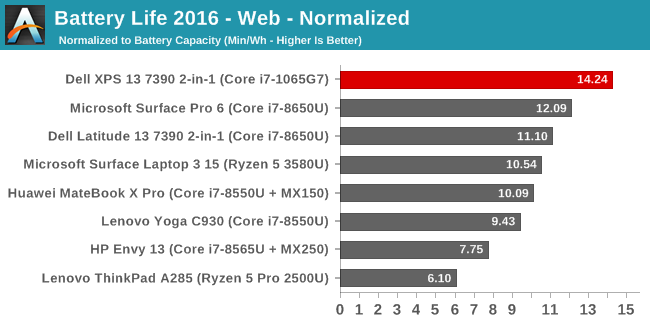 By removing the battery size from the equation we can get a peek at the platform efficiency, and the results are excellent for the first Ice Lake system we’ve tested. Much like how the first move to 14 nm in Broadwell brought a significant decrease in power usage, the XPS 13’s 10 nm Ice Lake platform achieves a significant step forward in efficiency in both our very light test, which is mostly idle time with small bursts of work, as well as the 2016 test which is much more demanding on the CPU.

The system power draw at idle, including the display power which is always the largest draw, is only around 3 Watts, which is quite good.

Dell’s XPS 13 7390 2-in-1 brings a nice step forward in overall battery life, and unlike some of Dell’s earlier offerings it doesn’t try to do too much with excessive Content Adaptive Backlight Control which was a hindrance on older models of the XPS 13. For the current generation, CABC doesn’t appear to be leveraged at all.

With class-leading efficiency, the slightly smaller battery capacity is not a hindrance at all, with the Dell achieving excellent battery life results regardless of the 50 Wh of battery capacity.

Dell utilizes a Type-C charging adapter, which is always welcome on a modern laptop. The unit shipped with the XPS 13 2-in-1 is just a 45-Watt charger though, which is plenty to power this very efficient machine, but not enough power to provide much in the way of fast charging. With Express Charging enabled and the machine off, Dell claims 80% in one hour, but that goes down if the machine is on. 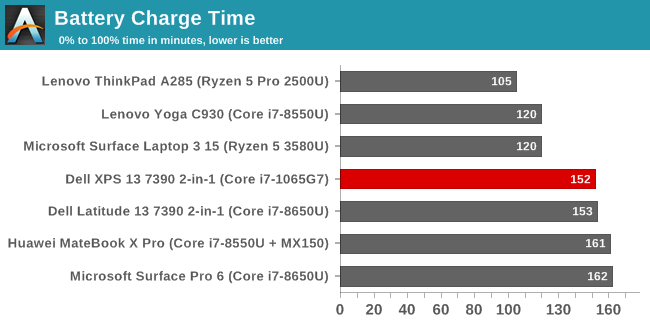 Overall charge time came in about average, at just a smidge over 2.5 hours. If you need more power and expansion, Dell offers a Type-C dock with a 130-Watt adapter, as well as a Thunderbolt dock with a 180-Watt power source.