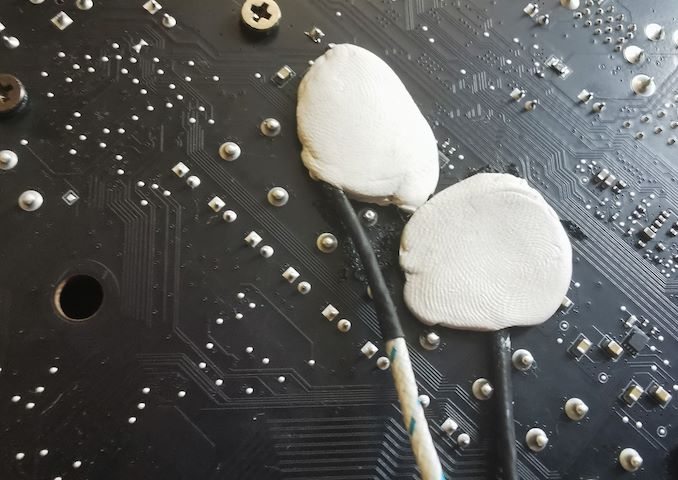 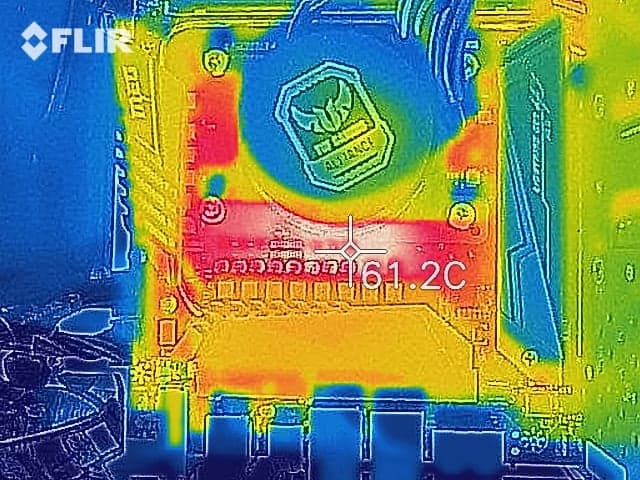 We measured 61.2°C on PCB between the CPU socket and power delivery

The MSI MEG X570 Ace uses a 12-phase CPU VCore design with an International Rectifier IR35201 running in a 6+2 configuration with six IR3599 doublers for the VCore section. This is quite an effective design and should be more than capable of handling of reaching the thermal limits of the processor long before the VRM reaches its own limits. Its heatsink also features an interesting design as the aluminium heatsinks on the power delivery is connected via a heat pipe to the chipset heatsink which is channelled around the memory slots. The chipset heatsink is actively cooled and although it is designed to keep the X570 chipset cool, it should provide a little thermal relief to the power delivery; in theory at least.

Note - The ASRock B450 Gaming ITX-ac model crashed instantly every time the small FFT torture test within Prime95 was initiated. At anything on the CPU VCore above 1.35 V would result in instant instability. The Ryzen Master auto-overclocking function failed every time it tried to dial in settings, but it does however operate absolutely fine at stock, and with Precision Boost Overdrive enabled.  Either the firmware is the issue, or the board just isn't capable of overclocking the Ryzen 3700X with extreme workloads with what is considered a stable overclock on the X570 chipset. We will re-test this in the future.

Our thermal testing shows that not only is MSI's heatsink design effective on the MEG X570 Ace, but the power delivery actually dissipates heat appropriately. We ran our AMD Ryzen 7 3700X testbed sample at 4.1 GHz with a CPU VCore of 1.475 V just to generate as much pressure as we could. We did get thermal throttling when using the maximum allowed VCore of 1.55 V and decided to dial it back a touch. The sensor integrated into the power delivery gave us a reading of 66°C after an hour of our stress test, while our VRM probe temperature sensor on the rear of the PCB gave us a reading of 61°C. It was very warm in our test area at the time of testing with an ambient temperature of between 29 and 30°C, so this probably attributed to slightly warmer conditions than usual. One of the notable aspects was that we frequently hit CPU temperature limitations before we hit VRM thermal limitations. All-in-all, the MSI MEG X570 Ace performs well under our thermal testing conditions and we have no fears that this model won't handle overclocks on any of the current Ryzen 3000 range with its effective and efficient design.