The burst sequential read performance of the Kingston KC2000 is excellent, though slightly slower than the same SSD controller manages when paired with Micron 64L TLC rather than the Toshiba 96L TLC that Kingston is using. 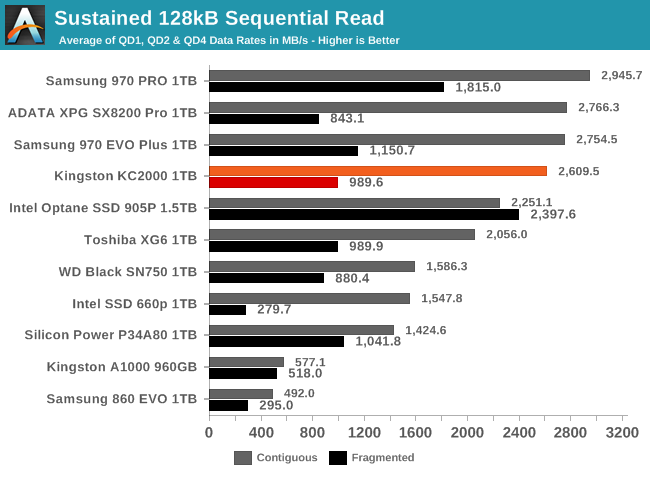 On the longer sequential read test that brings in some higher queue depths, the KC2000's performance doesn't stand out from other top TLC NVMe drives. The Samsung 970 EVO Plus is roughly 5-15% faster, but you have to step up to an MLC or Optane drive to see a huge boost to the worst-case fragmented data performance.

The power efficiency of The Kingston KC2000 during the sequential read test is not quite top tier, but it is still acceptable for a high-end NVMe SSD. In absolute terms, the KC2000 is one of the most power-hungry M.2 drives in this bunch, and it doesn't quite have enough performance to match.

The Kingston KC2000 is fairly well-behaved across the range of queue depths tested, reaching full speed at QD4 or higher. However, it is always a bit slower and more power-hungry than the ADATA SX8200 Pro. 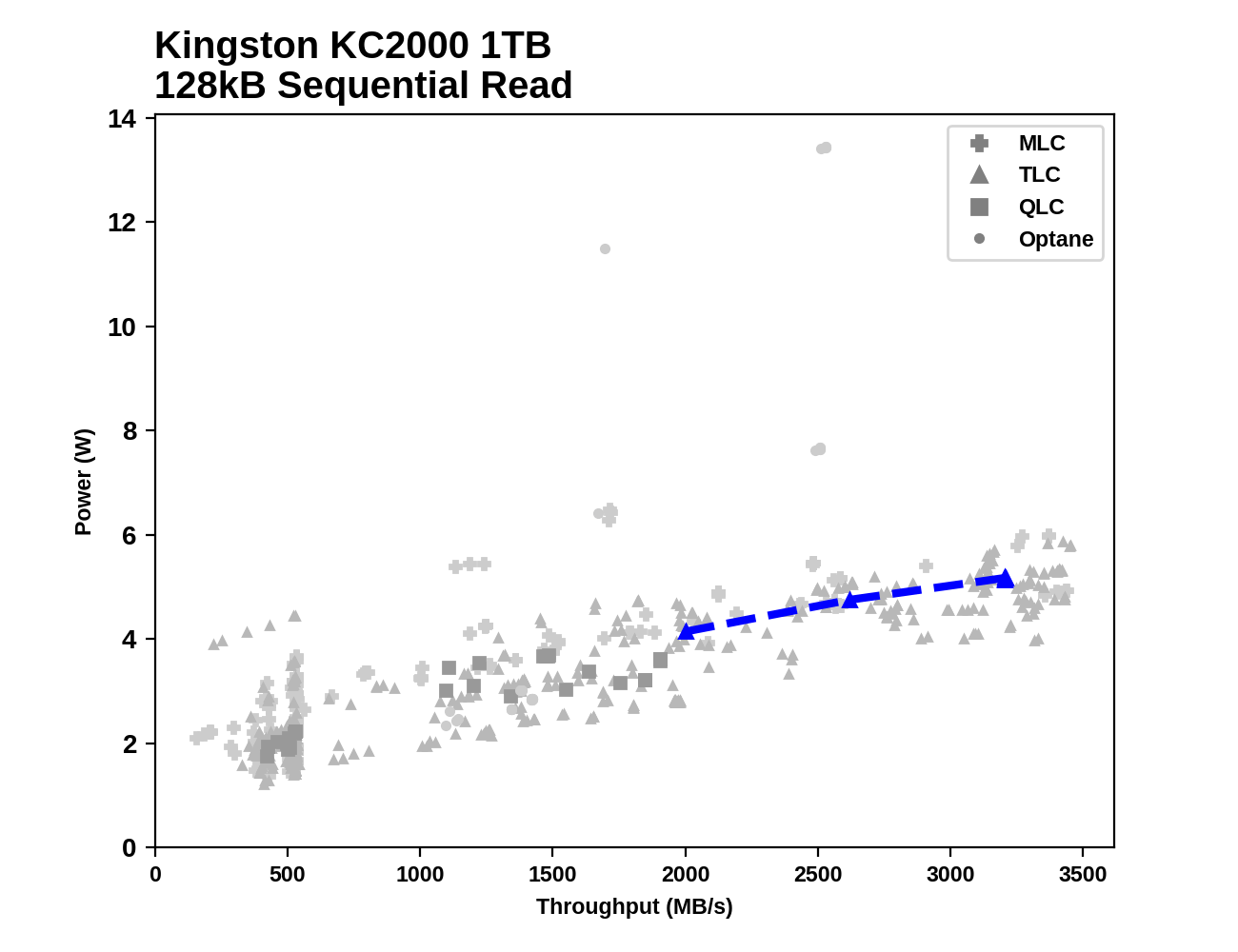 Comparing the KC2000 against the entire library of test results shows that it mostly offers the performance expected from a PCIe 3 x4 drive, but doesn't quite saturate the link as well as the competition, and its power efficiency is nothing special.

The burst sequential write speed of the Kingston KC2000 is much slower than the fastest high-end NVMe SSDs offer, but still acceptable for this market segment. The SSD controller clearly isn't the bottleneck since the ADATA SX8200 Pro is faster by over 200MB/s, and judging by the WD Black it appears the 96L BiCS4 TLC isn't really any faster than the 64L BiCS3 TLC.

On the longer sequential write test the KC2000 again isn't the fastest, but it holds up better than the Phison E12 drive and doesn't lose much ground relative to the other SM2262EN drive.

The power efficiency of the Kingston KC2000 during the sequential write test is good, but a bit lower than the fastest drives that only require slightly more power.

The Kingston KC2000 hits its full sequential write speed at QD2 and has no trouble maintaining that speed for the rest of the test thanks to the large SLC cache. However, it's still a much slower SLC write speed than Intel/Micron and Samsung NAND offers. 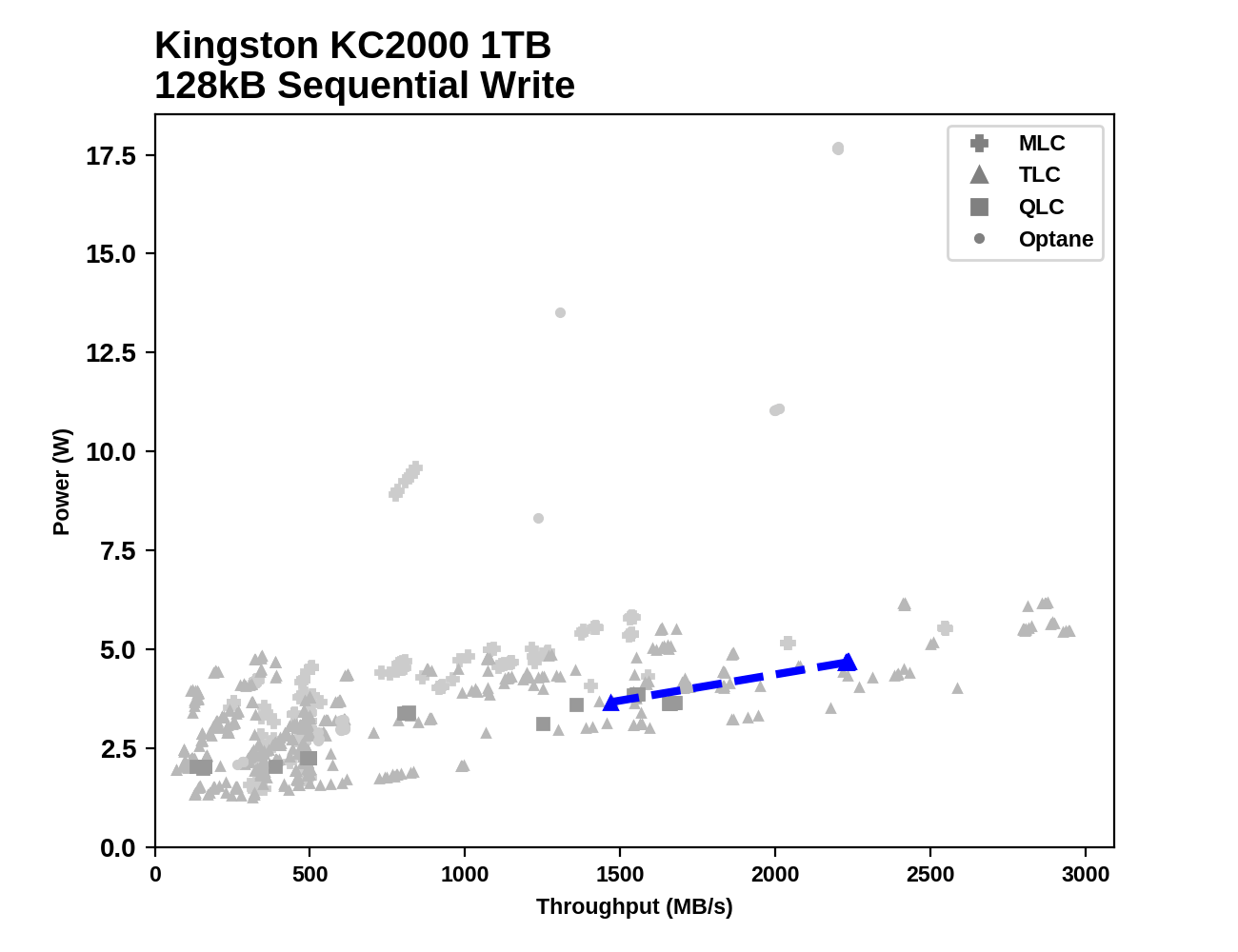 Plotting the KC2000's sequential write results against the broader landscape shows that the KC2000 doesn't make it very far into true high-end performance territory, and its power consumption is a bit high for the maximum speeds it does attain.