In The Belly Of The .NET Beast

ATI decided to take a different approach this time around. The Catalyst Control Center (CCC) is written as a client/server pair, and allows for much extensibility and customization. All the underlying work of communicating with the driver has been taken care of in the server, which also exposes hooks to adjust any of the settings that ATI allows to be changed. 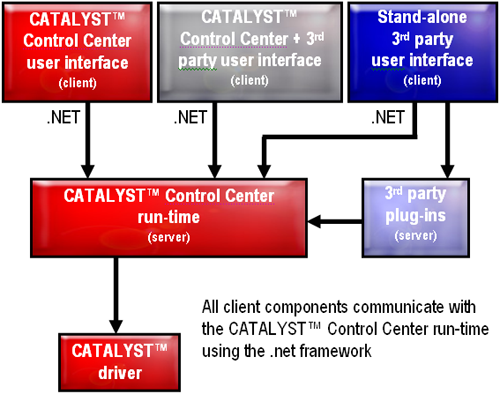 In talking about the usefulness of this, ATI has stated that vendors will now be able to customize effectively and quickly the control center for their product. We will also probably see UI mods from industrious users who want to add or subtract functionality, as the programming interface is not being kept private.

There are a couple of downsides to going with .NET for a graphics driver user interface. First, the client and server are constantly running. Second, the .NET framework from Microsoft is required (available via Windows Update). These aren't major kinks, but they definitely are not desirable. Probably the most annoying issue that we ran into is that installing the .NET framework made it such that our main user account didn't auto-login anymore. This was easily fixed and not that big of a deal (and it's also Microsoft's problem).

The 60 or 70 extra megs of memory used and multiple extra processes running are not what resource snobs are going to want to see, but ATI provided us a FAQ that addresses multiple questions about resources. They state that the CCC will release any memory that it occupies if another process requests it. We don't have a good way of testing this right now, but we can say that we haven't observed any performance drop in games due to the new UI. Maybe we should run Winstone to see if it impacts normal usage models.

So now that we know a little bit about how the CCC was built, let's take a look at what it does.