The screen of the OnePlus 7 Pro is definitely the key feature of the phone. The 6.67” 3120 x 1440 resolution panel not only represents OnePlus’ highest resolution display to date, but the 90Hz display mode also makes it stand out above any other smartphone currently available.

In our article covering the phone’s announcement, a big question for me was exactly how OnePlus had achieved the running of 1440p90 in terms of hardware implementation between the SoC and the panel DDIC. Initially I had theorised that OnePlus would have had to employ a dual-MIPI interface, doubling up on the hardware connections between the two chips.

To my surprise when investigating the device’s kernel source, this actually isn’t the case, and the OnePlus 7 Pro still only has a single MIPI interface to the DDIC. After a bit of research, the only explanation I have is that this must be one of the very first devices in the market which is implementing a newer D-PHY physical layer standard in the MIPI DSI interfaces. The SoC and DDIC must be using either a new D-PHY 1.2 or D-PHY 2.0 standard with much increased data transfer rates.

I was actually quite surprised by this and it’s generally excellent news for the phone as it means the hardware implementation was done in the most optimal way, as opposed to the less efficient dual-interface implementation on some other phones.

I did try to measure what the actual power drain of the screen was, but wasn’t able to get to quite as straightforward results as I wanted. Measuring input power into the phone, the device’s base drain was in line with last generation devices at ~550mW in 60Hz mode. Oddly enough turning on 90Hz had a large effect on the drain and increased base power by ~100mW.

Measuring the power on the device’s internal PMIC however showed good figures in line with the Galaxy S10 at a lower ~400mW, and no noticeable difference between the 60 and 90Hz modes. We’ll revisit this discussion later on in the battery results page, but for the moment I’m more inclined to believe the former (worse) numbers given the results I’ve achieved.

First of all, let’s go over the fundamentals of the display panel itself. OnePlus promises a lot, and indeed the phone checkmarks almost every feature out there, including high resolution, high refresh rate, and high brightness and support for HDR10+ content.

The device’s screen gamuts are implemented in the traditional style with multiple pre-defined profiles. There’s a “Vivid” mode which goes beyond the DCI P3 standard, and there’s an accurate “Natural” mode that is also colour managed for Display P3 and sRGB content much like on the Galaxy S10.

On top of these, OnePlus also gives an “Advanced” option with sub-selections of the AMOLED, P3 and sRGB gamuts with a custom colour temperature slider. These later modes are quite a disappointment as we’ll see shortly. 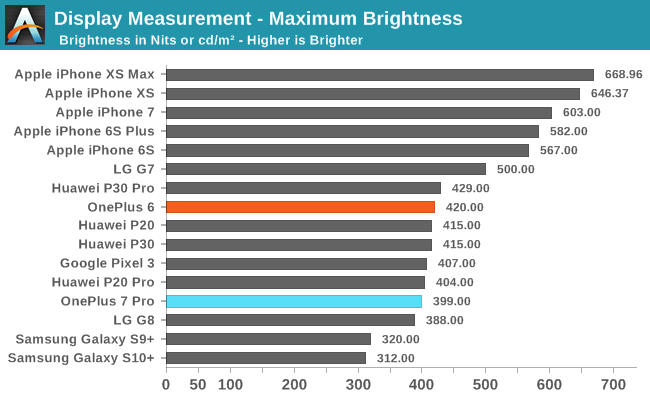 In terms of maximum brightness in manual mode, the OnePlus 7 Pro achieves up to 399 nits on full-screen white, which is in line with other phones which have dedicated high brightness modes in “Auto”. It’s to be noted that OnePlus here is quite a bit brighter than Samsung’s phones.

When high brightness mode is enabled under high ambient luminosity in the Auto mode, the OnePlus 7 Pro boosts up to ~548 nits. I was a bit surprised at this figure as it is well below OnePlus’ advertised figure of 800 nits at 100% APL. I again dug a bit deeper into the drivers of the panel and saw that the hardware isn’t allowed to go over 670nits in HBM. After further digging I discovered that the brightness behaviour in the Vivid mode is quite different and this actually even activates APL brightness scaling; here the phone is able to reach around the 670nits figure at 100% APL.

So although brightness of the phone’s display isn’t really an issue, it’s not quite as bright as advertised, and it also doesn’t quite reach the levels of some other phones by the competition when in accurate colour modes. Legibility in direct sunlight as captured above in the picture is still very good.

We’re measuring Grayscale accuracy in the device’s most accurate default mode; the “Natural” mode. At 200 nits brightness, the phone is showing good results. The biggest issue I see is that it’s veering off towards the warmer side with an average CCT of 6013 – the blues are clearly too weak in this display mode. The core issue here is that colour temperature over brightness isn’t quite linear and the brighter you get, the nearer to the target 6500K you get.

Gamma accuracy is also good, although just slightly above the target 2.2 mark at 2.36 average. The average is pulled up due to the first and last 10% of levels being too dark.

OnePlus had advertised an odd minimum of 0.27 nits in brightness which I had time to comprehend at the beginning. Indeed this mode is only available when enabling “Night Mode 2.0” on the phone, which is essentially the blue light filter mode. Without this, the phone’s minimum white brightness is a regular 1.88nits which is in line with what we see in the industry.

Again we’re seeing black clipping at the lowest intensity levels of the phone. Currently only Apple’s iPhone X and XS series are the only OLED devices on the market to able to handle this characteristic correctly. 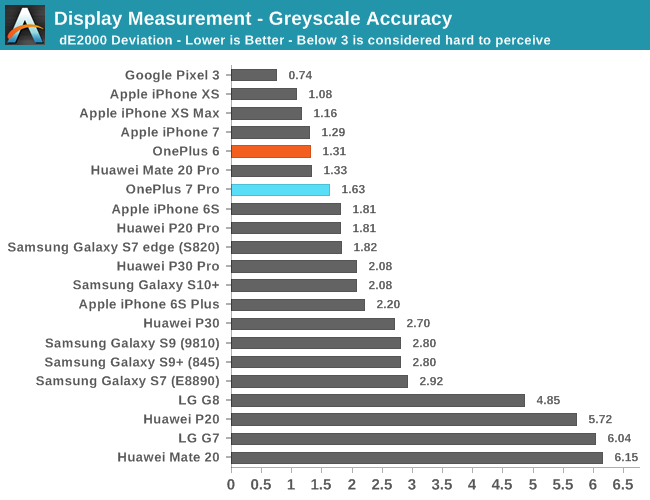 Overall the phone’s greyscale accuracy is good and in general most people won’t notice any issues in the “Natural” mode of the phone. 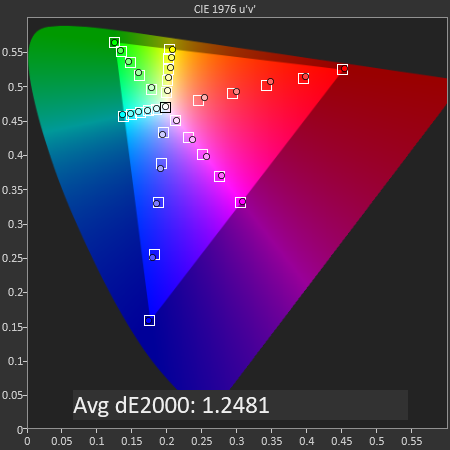 In terms of saturation accuracy of the phone, we also measure the Natural mode as the most accurate profile, but I want to take a second to showcase an oddity of the phone’s Advanced mode in a second.

In the Natural mode, the phone was excellent saturation accuracy results with a deltaE2000 of 1.24, with only slight deviations in the lower red intensity levels. 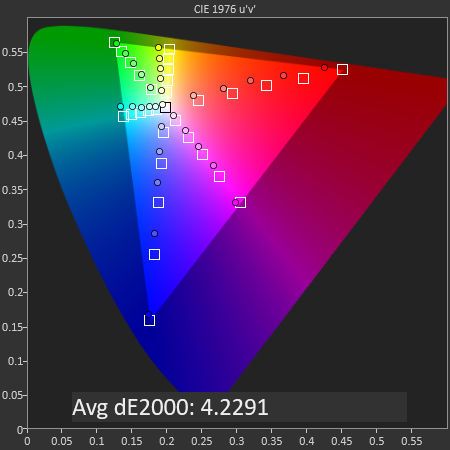 What’s really confusing is that the phone’s “Advanced” mode really isn’t that advanced. First of all the default colour temperature in this mode is very much off and too blue. For the above measurement I tried to get as close to accurate whites as I could with the slider (Slider around the 80% mark), however the results were still massively disappointing with results being quite over the place, resulting in a bad dE2000 of 4.22. 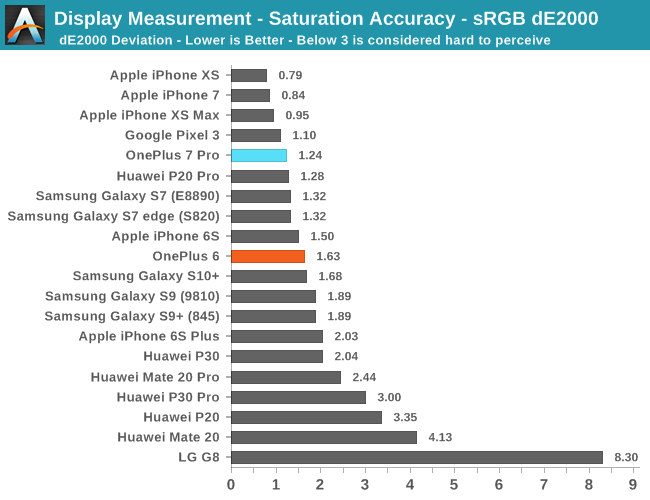 Nevertheless, I recommend the Natural mode and thus the display accuracy of the OnePlus 7 Pro in this regard ends up as extremely competitive and among the top performers. 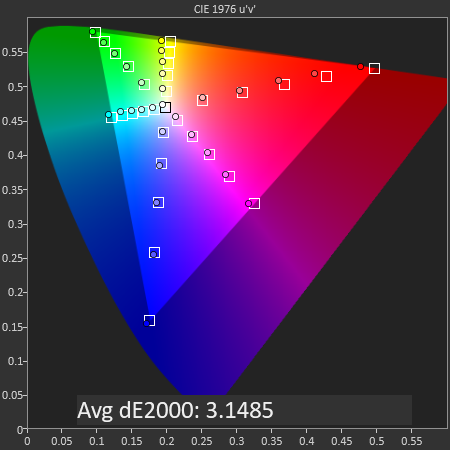 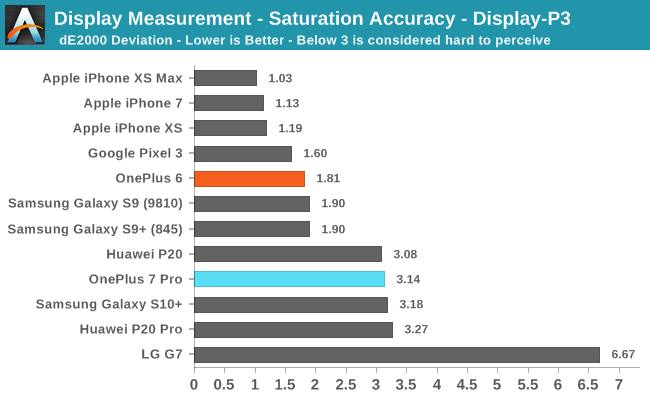 The Display P3 gamut is also available under the Advanced modes, although this mode also needed tuning to get to an acceptable colour temperature, and while the saturation accuracy was better than the sRGB mode, it still showcases some of the same deviations in the greens and reds and thus ends up with a dE2000 of 3.14 (yay for Pi). 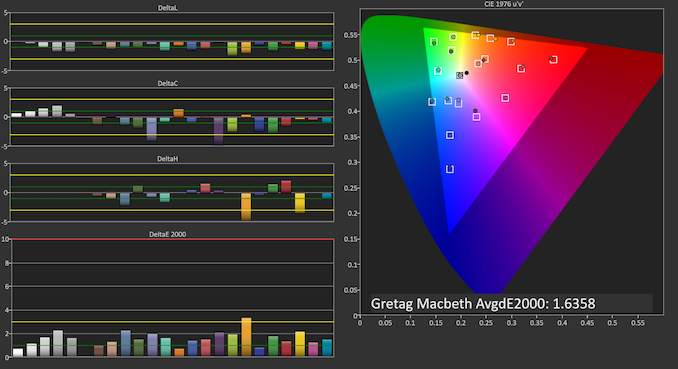 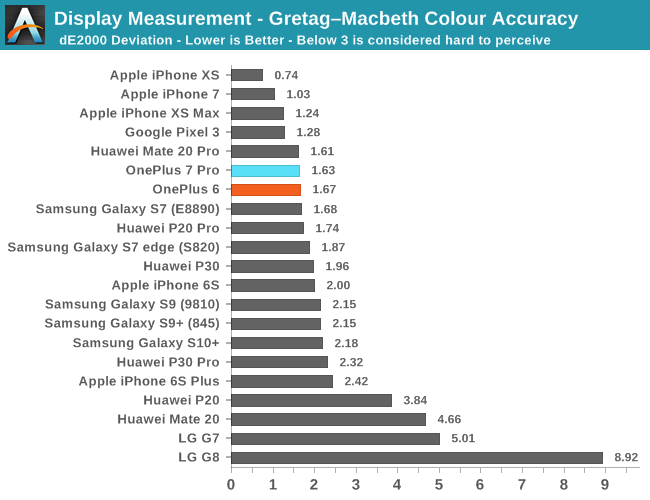 In the Gretag-Macbeth chart of common colours such as skin-tones, the OnePlus 7 Pro ends up with excellent results with a dE2000 result of 1.63. There’s some devices that still beat it, but overall it’s still a fantastic result and should result in visually imperceptible differences to consumers.

Overall, the OnePlus 7 Pro’s display is excellent. While it doesn’t really break any records, OnePlus was able to currently deliver the best Android screen this year, besting even Samsung in terms of calibration.

While there’s always room for improvement, the only other issue I’d talk about is that the screen’s side curvature is quite of a larger radius than what we’ve seen from other more recent phones adopting this design. This does result in more reflections.