On paper, the new Valhall architecture and the new Mali-G77 certainly seem like big changes, but what will be more important is to see what the performance, efficiency, and area claims are. 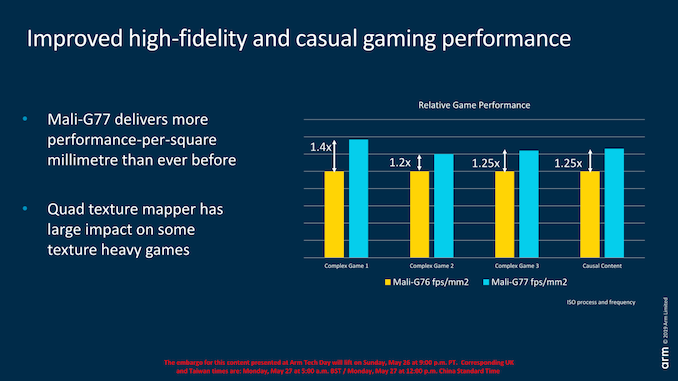 Arm’s performance claims are interesting because they’re being published in a performance per mm² basis. Due to how vendors implement their GPUs, in which they can vary core count as well as frequency, it’s hard to actually give a clear figure which describes the improvements between two discrete GPU configurations. In the case of the G77, Arm claims that the new IP is able to provide from 1.2x to 1.4x the performance/mm² compared to the G76. In absolute terms a G77 shader core is said to be about the same size as a G76 core.

What this means is that this could be directly translated into either a smaller GPU for the vendor, or simply more space to add in additional GPU cores and consequently increase the performance. Particularly Arm claims the G77 does very well in texture heavy games, so that will be something interesting to see in once devices actually come out and how different workloads will behave. 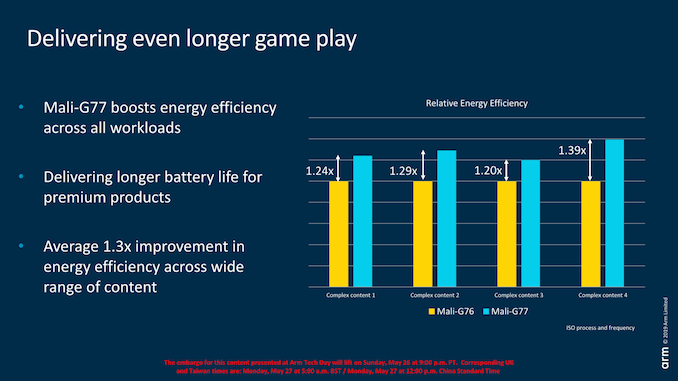 Another way to increase performance is to clock the GPU higher. Here the fundamental limit is the 4-5W TDP thermal envelope of smartphones. In a comparison at ISO-process and performance, the new G77 is said to use between 17% and 29% less energy and power to complete the same workloads. Or in other words, the performance/W is 1.2x to 1.39x better. Arm states that fundamentally frequency between the G76 and G77 shouldn’t change much at all, an internally Arm still targets and 850MHz sign-off.

This year I’m not going to attempt any performance and efficiency projections as there’s just too many variables at play. Among one of the larger changes for next year is that I’m expecting SoCs to support LPDDR5 which likely will change the power dynamics in smartphones by some notable margin.

Arm does note that they are expecting 1.4x performance jumps in next year’s SoCs with the G77. Using Samsung’s Exynos 9820 as the reference G76 implementation, this would mean that a future G77 SoC would come close with Apple’s A12 GPU’s performance at better power efficiency (assuming power levels are maintained). This would put Qualcomm in trouble as it would be a clear jump ahead of the current generation Adreno 640, however we expect Qualcomm to follow-up with a new generation GPU as well. 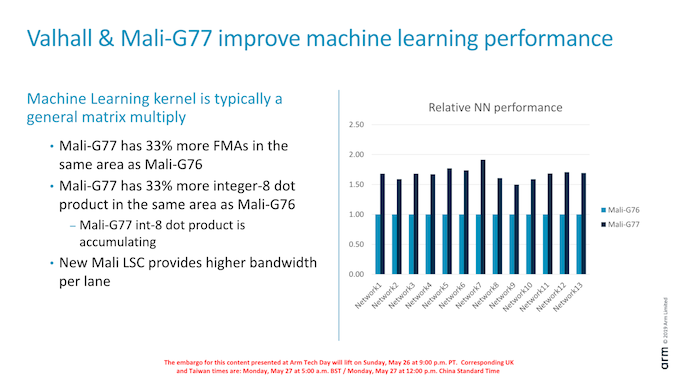 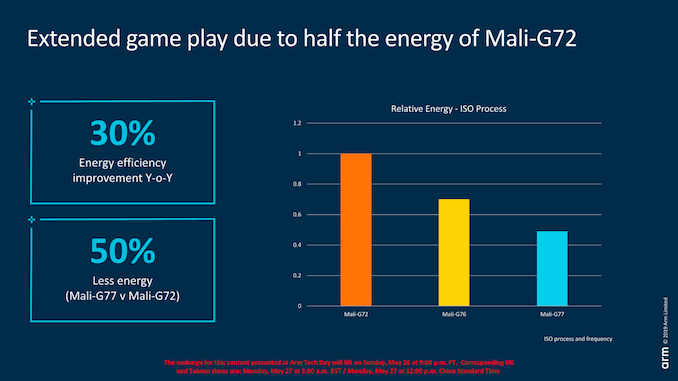 Finally, Arm made a generational comparison between the last two generation Mali GPUs. On the same process and at the same performance, the new G77 continues on track to 30% year-on-year energy efficiency improvements, and uses 50% less energy than a Mali-G72.

During the TechDay event Arm was clearly very excited about the new Valhall architecture and the new Mali-G77. There’s very much reason to be excited as it seems like Arm is about to showcase a significant generational jump in its Mali GPU IP.

The new G77 employs a brand-new architecture that fundamentally revamps Arm’s execution core, aiming for something more modern and in line with desktop GPU architectures. This seems like a shift that was long coming, as while the G76 was a relatively good GPU, the previous generation G72 and G71 weren’t. 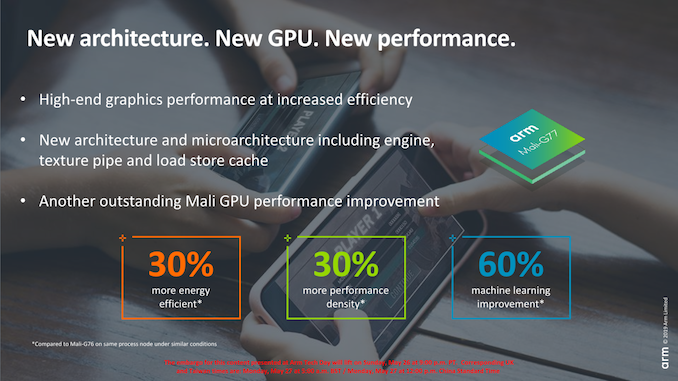 I’m expecting to see the Mali-G77 in the next generation of Samsung Exynos and HiSilicon Kirin SoCs later this year and early next year. On paper and if everything goes right, the G77 should be able to close the performance and efficiency gap to Apple and Qualcomm. In particular the G77 should be able to leap ahead of Qualcomm’s Adreno GPUs, that is, at least against the current-generation.

I’m fairly optimistic, and now Arm as well as the partner licensees just need to execute properly for users to be able to enjoy the end-results.