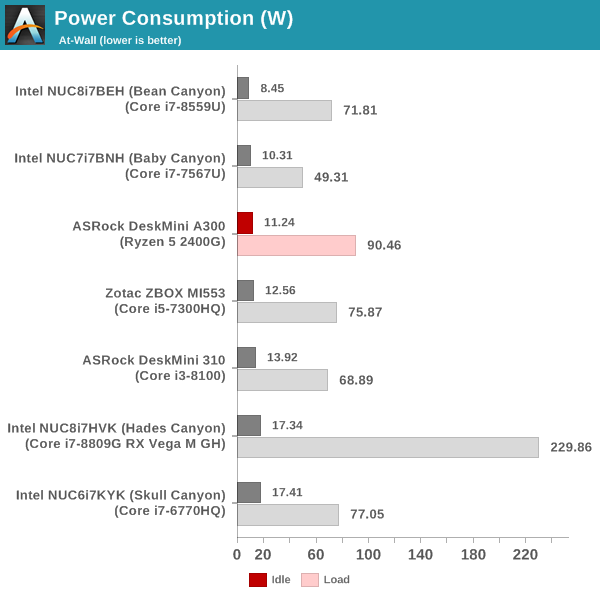 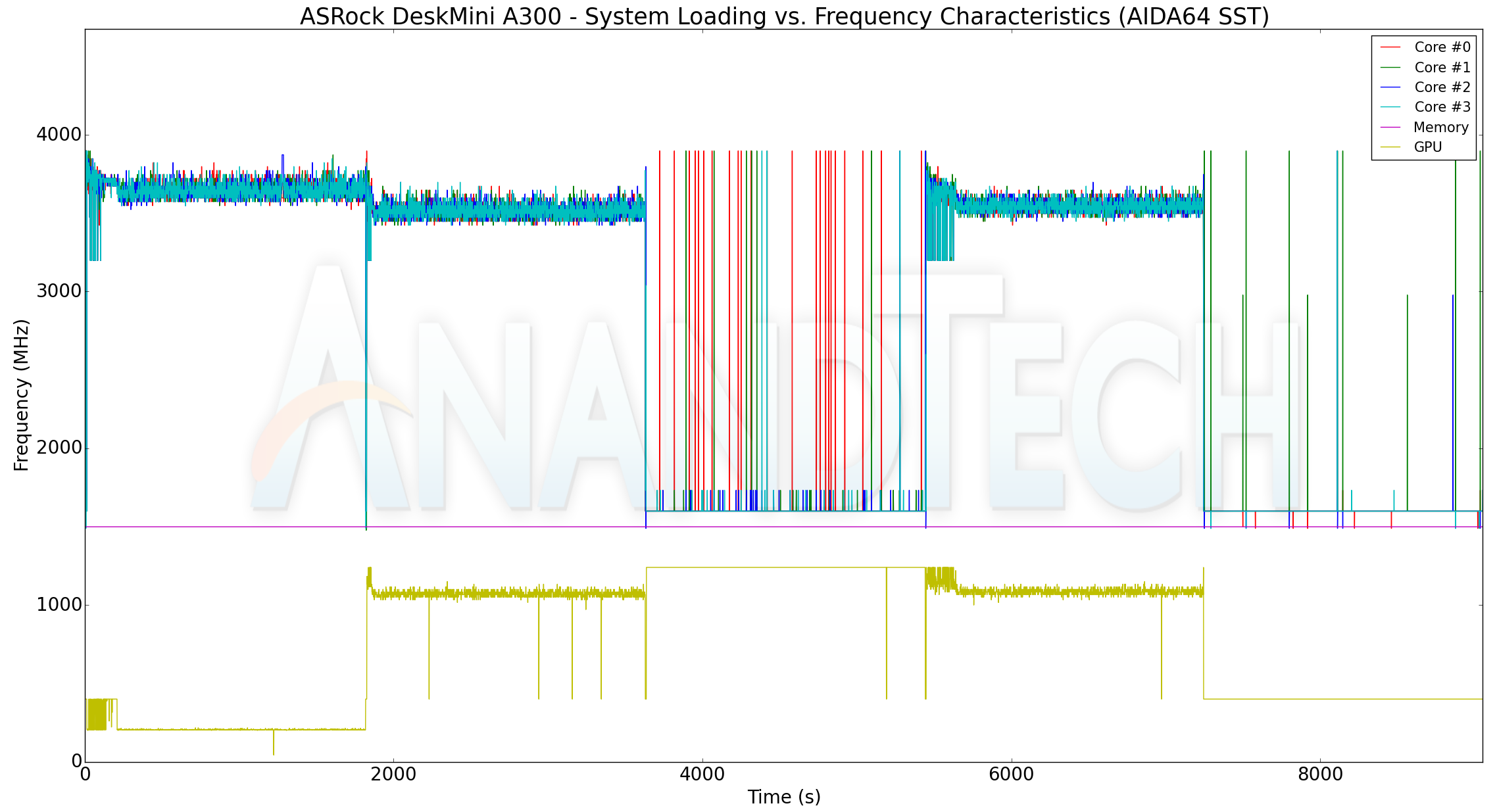 At the start of our stress routine, we see most of the cores at the boost clock (3.9 GHz), but, the temperature quickly approaches 78C. The DeskMini A300 BIOS seems to treat that as the indicator to bring down the cores to the base clock of 3.6 GHz. In this initial period, the package power (labeled as reported, but, is more likely to be the power consumption of the x86 cores alone) is around 35W. That drops down to 30W after the cores go back to the base clock. After adding the GPU loading, the cores clocks do go down a bit to around 3.4 GHz (as the GPU ramps up from around 200 MHz to around 1.1 GHz). The reported package power remains constant at 30W. Unlike the reported package power, the at-wall power consumption provides hard irrefutable numbers. In the boost clock state, the wall power goes as high as 80W before settling down to around 72W. When the GPU load is added, the metric stabilizes around 85W. If the GPU alone is loaded, the core clocks jump down to 1.6 GHz, and the GPU starts running at the rated clock (1250 MHz). The at-wall consumption is around 43W. When stressing everything in the system, the added storage workload slightly bumps up the at-wall consumption by a couple of watts, but, other metrics remain similar to the second stage. The temperature of the cores never exceed 80C at any point in the AIDA64 system stability test.

We also run a custom stress test involving Prime95 and Furmark. Starting with Prime95 alone, we add Furmark to the mix after 30 minutes. After another 30 minutes of simultaneous CPU and GPU loading, we terminate the Prime95 process alone and let the GPU run at full throttle. The metrics graphed for the AIDA64 system stability test are also graphed here. 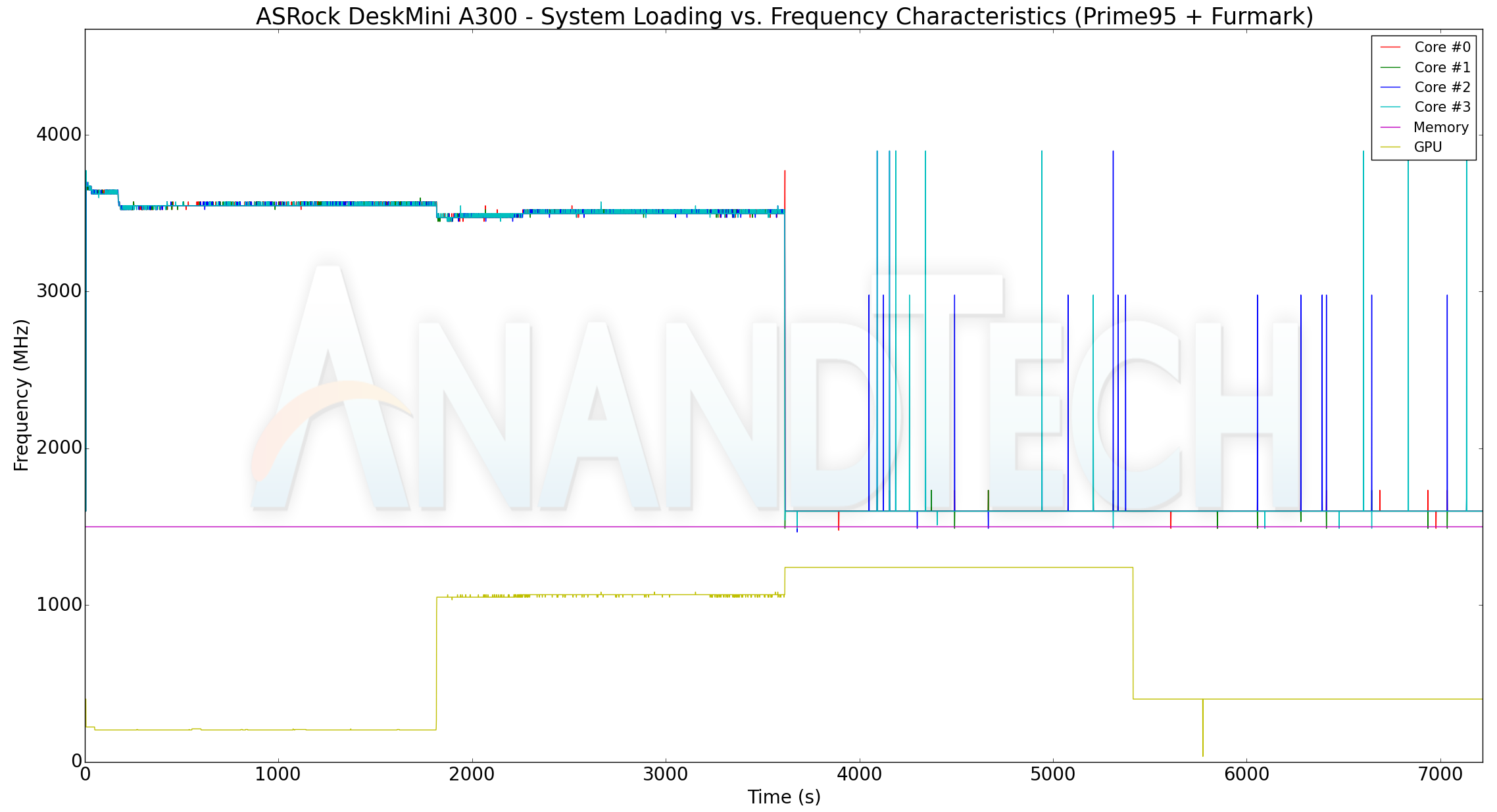 Interestingly, Prime95 doesn't trigger the boost clocks for the cores. Otherwise, the loading characteristics for the frequencies, temperature, and power are largely the same as what we observe with the AIDA64 system stability test workloads. The only thing of note is that Prime95 and Furmark together make the system consume north of 90W at the wall.

The thermal solution is very effective, ensuring that the temperatures never cross 80C while allowing the APU's CPU cores and GPU to operate at the advertised frequencies / rated power consumption. The 90W peak power consumption also indicates that the Ryzen 5 2400G is operating at its rated TDP of 65W in the DeskMini A300.