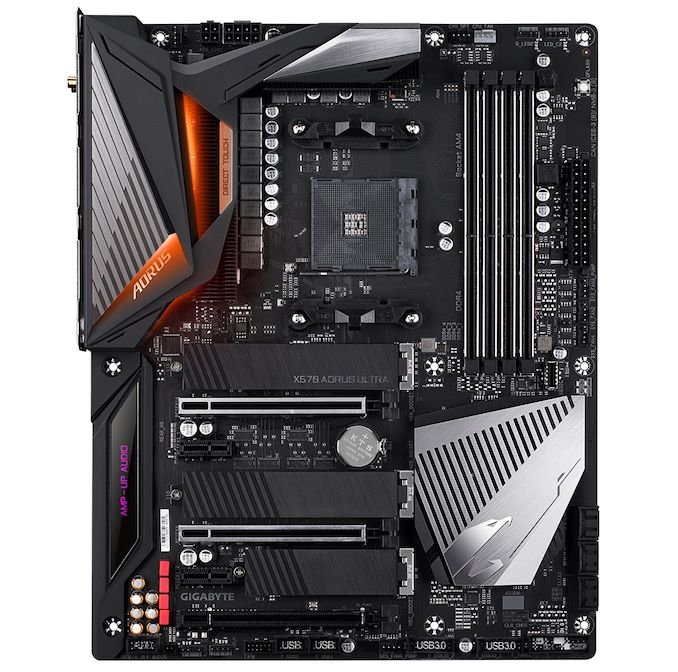 There are three full-length PCIe 4.0 slots which run at x16, x8/x8, and x8/x8/x4. This means the X570 Aorus Ultra has support for two-way NVIDIA SLI and up to three-way AMD CrossFire multi-graphics card configurations. Also present is two PCIe 4.0 x1 slots, while the board also benefits from three PCIe 4.0 x4 M.2 slots which each comes with its own individual heatsink. For users not adopting M.2, there are six SATA ports which have support for RAID 0, 1 and 10 arrays. The four memory slots include support for DDR4-4400 and with a maximum capacity of up to 128 GB. The aesthetics aren't as overbearing as the X570 Aorus Xtreme, but the rear panel cover which extends down to cover the audio PCB does feature integrated RGB LEDs.

On the rear panel is two USB 3.1 G2 Type-A, one USB 3.1 G2 Type-C, three USB 3.1 G1 Type-A and four USB 2.0 ports. A set of antenna ports for the Intel AX200 802.11ax Wi-Fi 6 wireless interface are present, and the single Ethernet port is controlled by an Intel I211-AT Gigabit NIC. The five 3.5 mm audio jacks and S/PDIF optical output are controlled by a Realtek ALC1220-VB HD audio codec, while a single HDMI output is featured for users to use Ryzen APUs with integrated graphics.