Acer’s Nitro 5 offers a 1920x1080 15.6-inch display which is an IPS panel, which is great to see. Even though this is a value offering, it would have been disappointing to see a TN display, so well done Acer. That is about where the good qualities of this display end, unfortunately. 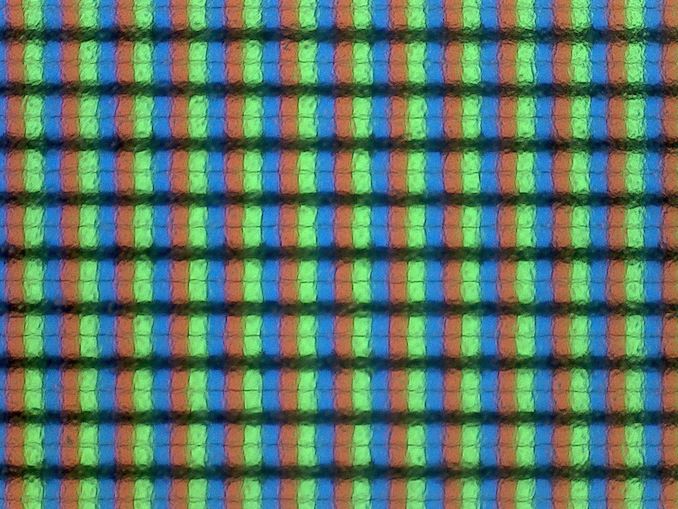 At 15.6-inches in size, the 1920x1080 resolution does allow you to run 100% scaling without the elements getting too small. That’s a benefit for sure, since you won’t get the artifacts that can still existing when using scaling in Windows 10. There’s been a lot of improvements to the OS to correct this, but not all applications have taken the time to ever deal with it. Luckily that won’t be a concern at 100%.

Here is where things start to get unravelled for the Nitro 5. The grayscale accuracy is terrible, thanks to the green part of the backlight being far too bright at almost any point in the range. The gamma curve is also well off the 2.2 value expected, falling increasingly under that point starting at around 35% brightness. This means there will be less of a dynamic range between highs and lows as you go towards greater brightness levels.

Here we can start to see the problems inherent in this display. The greens are the only colors even close to hitting the sRGB gamut, with red well under and blue doing its best impression of Hawaii. The graph ranges had to be adjusted just to see on the chart how far blue is off the mark, and at almost a dE2000 of 25, it is very, very far from where it should be. 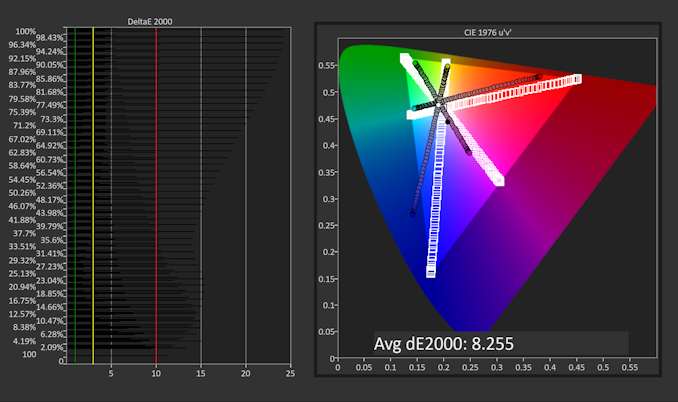 Gamut is the primary and secondary colors at 100% brightness, whereas with the saturation sweep we test with 4-bit steps from 0% to 100%. It’s amazing just how far off the blue levels are, and coupled with the less than amazing reds, the magenta values are also dramatically impacted. 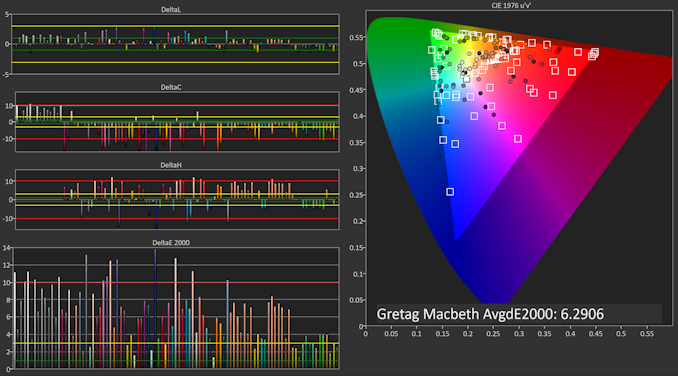 This graph also needed to have almost all of the charts adjusted to show just how far off the mark the colors are on this display. Considering the less than amazing primary colors, it’s no shock that every single color is pretty much terrible.

This image shows the intended color on the bottom, and the achieved color on the top, so it gives a nice representation of the previous tests. The whites are very green, and the colors are mostly terrible.

This display is possibly the least accurate IPS panel we have ever tested. The uncalibrated panel is coupled with a backlight that can’t even come close to covering the entire sRGB spectrum. The Acer Nitro 5 is an entry-level device, and the display is one of the ways they made it to their target price.