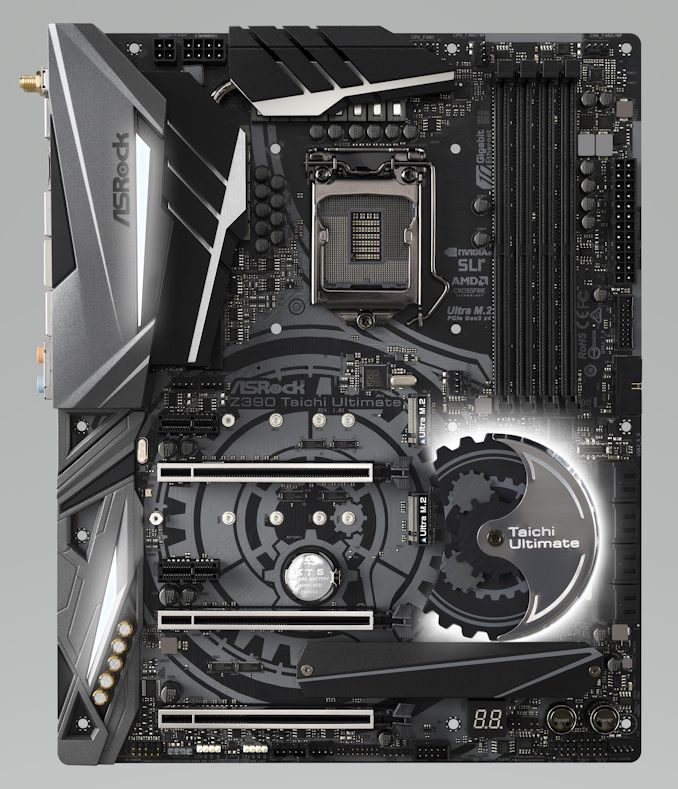 The main differences between the two Taichi branded models come in terms of controllers as the Z390 Taichi Ultimate adds an additional LAN port to the already inclusive dual Intel-based LAN, an Aquantia 10 G NIC which is one of the only Z390 motherboards to include one. The rest of the rear panel is much of the same with three USB 3.1 Gen2 Type-A, one USB 3.1 Gen2 Type-C and four USB 3.0 Type-A ports. A Realtek ALC1220 codec handles the onboard audio and ASRock has included a pair of video outputs which consist of a DisplayPort and HDMI 1.4 port. The Z390 Taichi Ultimate keeps eight 4-pin fan headers which makes it one of the most cooling focused ATX boards alongside its younger brother, the Z390 Taichi. To add more, ASRock has included a pair of separate power/reset buttons and has upgraded the Wi-Fi to support 2T2R Wave 2 802.11ac.

The ASRock Z390 Taichi Ultimate at launch costs $300 and is the most expensive Z390 models. Everything about this board has flagship status including a proper triple NIC (unlike the MSI MEG Z390 GODLIKE) with the inclusion of an Aquantia controlled 10 G LAN port, 2T2R 802.11ac Wi-Fi, triple M.2 and plenty of USB 3.1 Gen2 to keep professional users, enthusiasts and gamers satisfied. The board is more targeted towards the enthusiast rather than the gamer, but ASRock makes this clear with the inclusion of the similar spec and closely priced Z390 Phantom Gaming 9 motherboard.