3Dc isn't something that's going to make current games run better or faster. We aren't talking about a glamorous technology; 3Dc is a lossy compression scheme for use in 3D applications (as its name is supposed to imply). Bandwidth is a highly prized commodity inside a GPU, and compression schemes exist to try to help alleviate pressure on the developer to limit the amount of data pushed through a graphics card.

There are already a few compressions schemes out there, but in their highest compression modes, they introduce some discontinuity into the texture. This is acceptable in some applications, but not all. The specific application ATI is initially targeting for use with 3Dc is normal mapping.

Normal mapping is used in making the lighting of a surface more detailed than is its geometry. Usually, the normal vector at any given point is interpolated from the normal data stored at the vertex level, but, in order to increase the detail of lighting and texturing effects on a surface, normal maps can be used to specify the way normal vectors should be oriented across an entire surface at a high level of detail. If very large normal maps are used, enormous amounts of lighting detail can produce the illusion of geometry that isn't actually there. 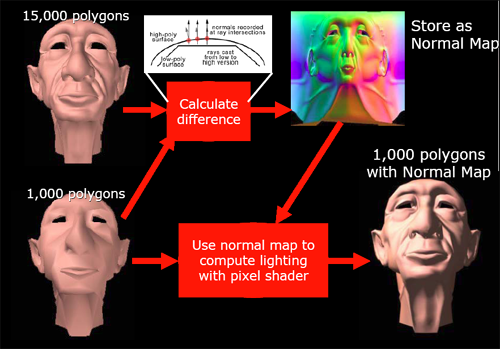 In order to facilitate a high level of continuity, 3Dc divides textures into four by four blocks of vector4 data with 8 bits per component (512bit blocks). For normal map compression, we throw out the z component which can be calculated from the x and y components of the vector (all normal vectors in a normal map are unit vectors and fit the form x^2 + y^2 + z^2 = 1). After throwing out the unused 16 bits from each normal vector, we then calculate the minimum and maximum x and minimum and maximum y for the entire 4x4 block. These four values are stored, and each x or y value is stored as a 3 bit value selecting any of 8 equally spaced steps between the minimum and maximum x or y values (inclusive). 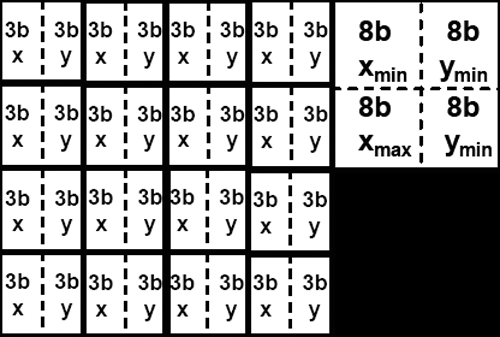 the resulting compressed data is 4 vectors * 4 vectors * 2 components * 3 bits + 32 bits (128 bits) large, giving a 4:1 compression ratio for normal maps with no discontinuities. Any two channel or scalar data can be compressed fairly well via this scheme. When compressing data that is very noisy (or otherwise inherently discontinuous -- not that this is often seen) accuracy may suffer, and compression ratio falls off for data that is more than two components (other compression schemes may be more useful in these cases).

ATI would really like this compression scheme to catch on much as ST3C and DXTC have. Of course, the fact that compression and decompression of 3Dc is built in to R420 (and not NV40) won't play a small part in ATI's evangelism of the technology. After all is said and done, future hardware support by other vendors will be based on software adoption rate of the technology, and software adoption will likely also be influenced by hardware vendor's plans for future support.

As far as we are concerned, all methods of increasing apparent useable bandwidth inside a GPU in order to deliver higher quality games to end users are welcome. Until memory bandwidth surpasses the needs of graphics processors (which will never happen), innovative and effective compressions schemes will be very helpful in applying all the computational power available in modern GPUs to very large sets of data.