Who said that a 250W processor should not be overclocked? AMD prides itself as being a processor manufacturer that offers every consumer processor as a multiplier unlocked part, as well as using a soldered thermal interface material to assist with thermal dissipation performance. This 2990WX has an X in the same, so let the overclocking begin!

Actually, confession time. We did not have much time to do overclocking by any stretch. This processor has a 3.0 GHz base frequency and a 4.2 GHz turbo frequency, and in an air-conditioned room using the 500W Enermax Liqtech cooler, when running all cores under POV-Ray, we observed each core running around 3150 MHz, which is barely above the turbo frequency. The first thing I did was set the all-core turbo to 4.2 GHz, the same as the single core turbo frequency. That was a bust.

However, the next stage of my overclocking escapades surprised me. I set the CPU to a 40x multiplier in the BIOS, for 4.0 GHz on all the cores, all the time. I did not adjust the voltage, it was kept at auto, and I was leaving the ASUS motherboard to figure it out. Lo and behold, it performed flawlessly through our testing suite at 4.0 GHz. I was shocked.

All I did for this overclock was turn a setting from ‘auto’ to ‘40’, and it breezed through almost every test I threw at it. I say almost every test – our Prime95 power testing failed. But our POV-Ray power testing, which draws more power, worked. Every benchmark in the suite worked. Thermals were high (in the 70s), but the cooler could take it, and with good reason too. 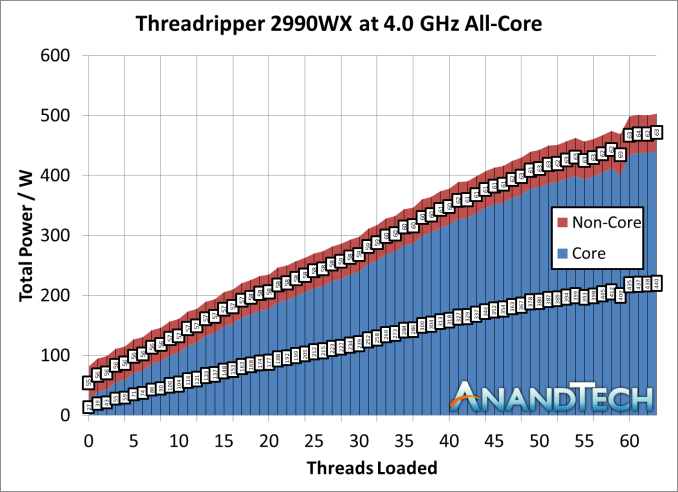 At full load in our POV-Ray test, the processor was listed as consuming 500W. The cooler is rated for 500W. At one point we saw 511W. This was split between 440W for the cores (or 13.8W per core) and 63W for the non-core (IF, IO, IMC) which equates to only 12.5% of the full power consumption. It answers the question from our Infinity Fabric power page - if you want the interconnect to be less of the overall power draw, overclock!

We also tried 4.1 GHz, and that seemed to work as well, although we did not get a full benchmark run out of it before having to pack the system up. As stated above, 4.2 GHz was a no-go, even when increasing the voltage. With tweaking (and the right cooling), it could be possible. For anyone wanting to push here, chilled water might be the way to go.

So if the all-core frequency was 3125 MHz, an overclock to 4000 MHz all-core should give a 28% performance increase, right? Here are some of the key tests from our suite.

Overclocking the 2990WX is a mixed bag, because of how it does really well in some tests, and how it still sits behind the 2950X in others due to the bi-modal nature of the cores. In the tests were it already wins, it pushes out a lot more: Blender is up 19% in throughput, POV-Ray is up 19%, 3DPM is up 19%. The other tests, is catches back up to the 2950X (Photoscan), or still lags behind (app loading, WinRAR).

Overclocking is not the cure-all for the performance issues on the 2990WX, but it certainly does help.