During the release of the Snapdragon 845, the performance increases of the Adreno 630 GPU were touted to also come with large efficiency increases. Based on our testing with the Galaxy S9 and subsequent devices we’ve found that while the peak performance increases indeed matched Qualcomm’s projections, the higher benchmark scores came at a cost of increased device power consumption. This had the negative effect that in our new sustained performance tests the S845 did not manage to maintain an equal excellent % of peak performance as S835 devices.

I’ve spent quite a bit of time retesting these results and still always came within the same conclusions. The OnePlus 6 however seems to be the one S845 device that seems to particularly perform out of the norm here, as we’ll see in the following benchmarks. 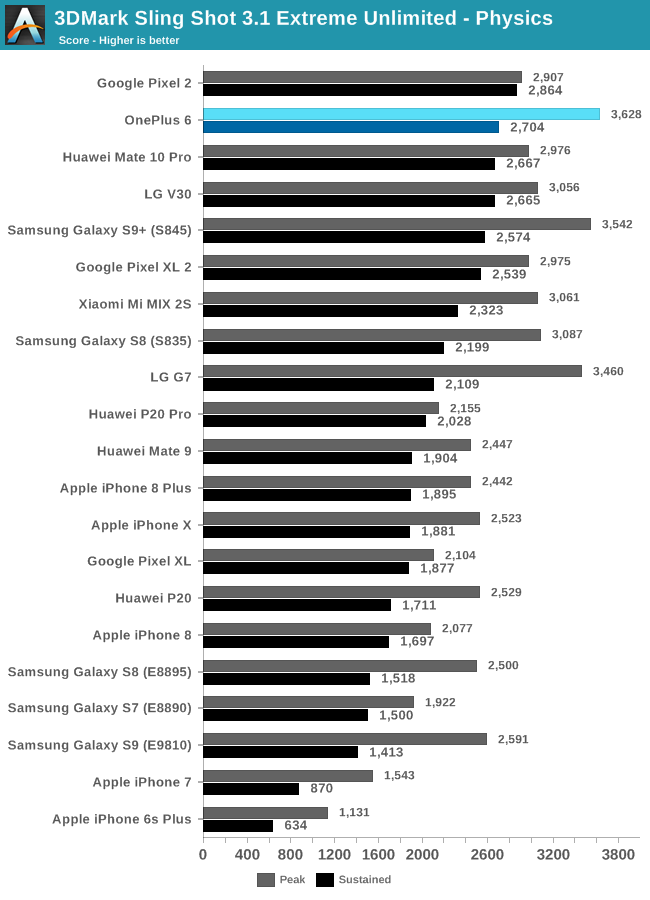 Starting off with the 3DMark Sling Shot Physics test is mostly a CPU bound test within a GPU power constrained thermal environment, the OnePlus 6 fares just a tad better than the Galaxy S9+, posting slightly better peak and sustained scores. 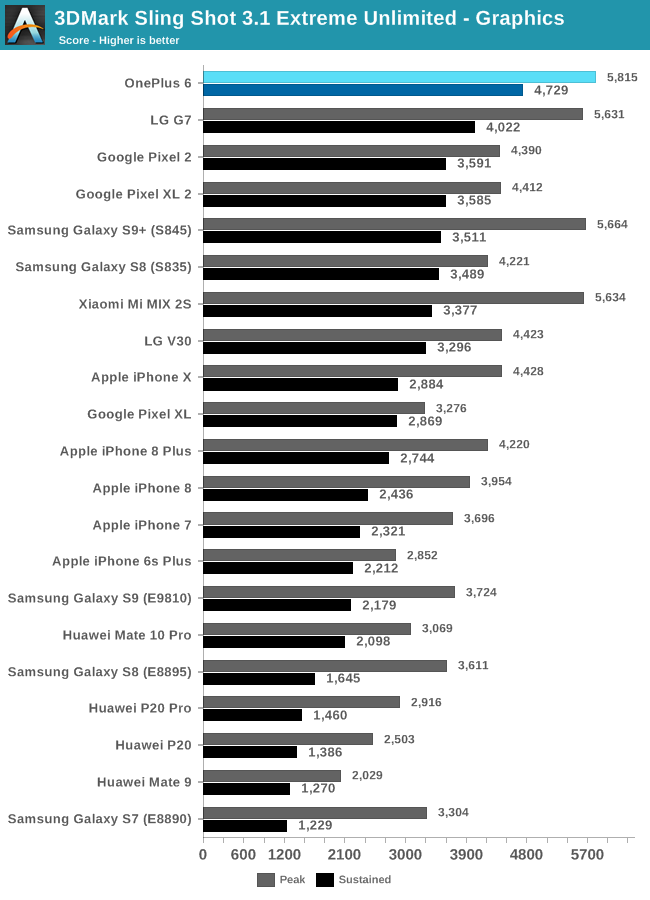 Switching over to the Graphics results of the test however, we see some very large divergences of the OnePlus 6 versus other devices. Here the OP6 posts a much better sustained score and a larger percentage of peak performance than other Snapdragon 845 devices. The LG G7 also showcases a slight advantage over the earlier devices but not quite as good as the OP6. 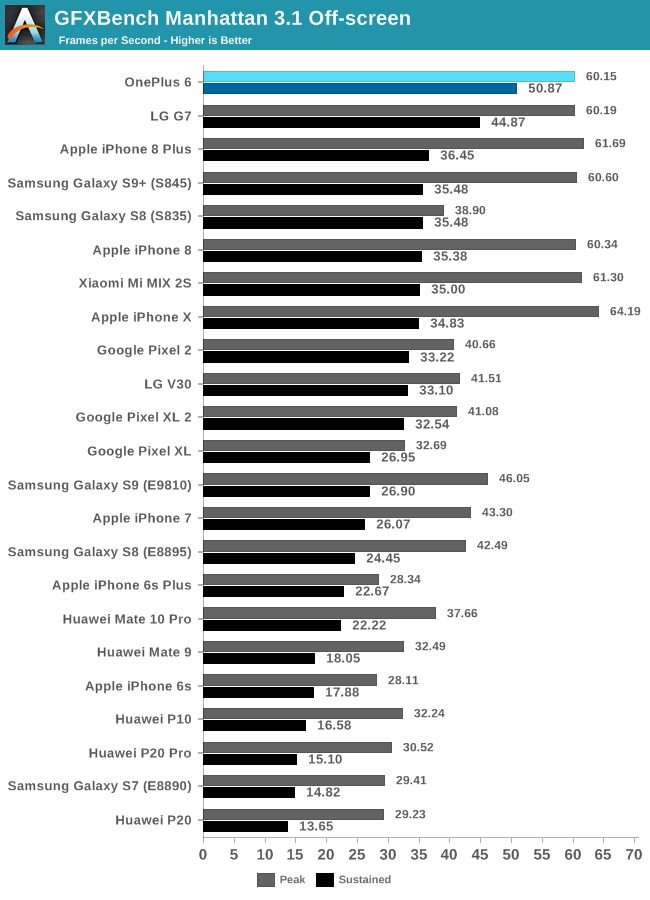 Switching over GFXBench Manhattan 3.1, we see a similar result as the OnePlus 6 posts 45% better sustained performance than the Galaxy S9+ and the Mi MIX 2S, with only the LG G7 behind it.

To verify these figures and to make sure that it wasn’t any change in environmental conditions during the testing I tested the phone alongside the Galaxy S9+ re-running the methodology again on the Samsung phone, and indeed the OnePlus 6 just was much better at sustaining performance as the initial end-result of the S9+ was reproduced. 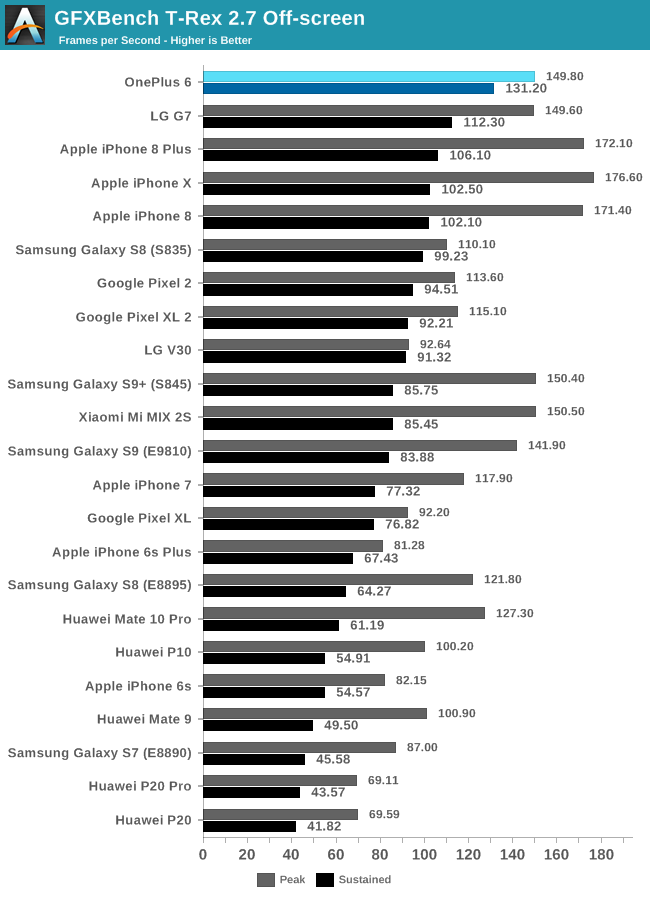 Finally, in T-Rex, the OnePlus 6 again manages to take the top spot in terms of sustained performance under stable thermal envelope.

As to why the OnePlus 6 really seems to post such different sustained performance characteristics is something that I think is attributable to thermal design of the phone. I measured 3D graphics power in the workloads and it didn’t really differ much from the measurements on the S9+, so this doesn’t seem to be a case of the GPU consuming less power either through whatever optimisations or possible better binned SoC unit.

While the Galaxy S9+ and Mi MIX 2S can get some quite high temperature hotspots at peak performance exceeding 55°C, the OnePlus 6 was much better and the worst skin temperature I measured on the warmest point, on the screen just over where the SoC is located, didn’t exceed 46°C. The phone seems to be much better at dissipating the heat throughout its mid-frame, and while overall the phone can still get quite warm, it’s more evened out and allows the SoC to seemingly maintain higher performance states. Obviously this is all circumstantial observations, it’s also possible that the OnePlus 6 also just has higher thermal throttling temperature settings, but then it would have also reached the very high temperature hotspots measured on the S9+ and MIX 2S, which just don't happen on the OP6.

In the end, the OnePlus 6 now posts the best graphics performance of any smartphone we’ve come to measure. This is not due to improved efficiency or power, but rather through a better sustained thermal envelope of the phone itself. It’s to note that while performance is very high, power for the Snapdragon 845 is still well above the Snapdragon 835 in this scenario and thus overall battery life at these high performance states will be worse.