One of the functions of a motherboard BIOS, or UEFI, is the ability to discern which CPU is installed in the socket. With each new generation of CPUs, new versions of BIOS firmware are launched such that the new processors can be detected and run. It is impossible to know in advance which CPUs are coming out 12-24 months in the future, so users need to update their BIOS before updating CPUs.

Users who have invested in AMD’s AM4 platform, pairing a Ryzen-2000 series CPU or APU with an early revision of the A320/B350/X370 motherboards might already be too familiar with this: buying a motherboard which should support the CPU on the latest BIOS, but the retailer has older stock which has not been updated. To solve this, AMD initiated a program whereby the company would send the user an early-series Bristol Ridge processor and cooler so the user could get the system to Boot, then the user can update the BIOS to use the new processor. Similar issues happen with Intel’s platforms as well, although they have been publicised less as Intel uses new sockets and chipsets more frequently. 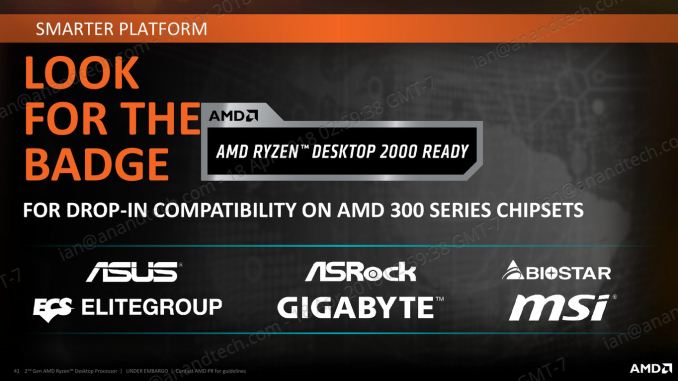 One of the advantages of updating sockets and chipsets more frequently is that the microcode required for previous generations of processors is not in the BIOS. By having a socket and platform that has a long life span, in order to support every processor, the BIOS has to contain all the microcode required for those processors. All of it. This can cause problems, such as the problems that some motherboard manufacturers are facing today.

During Computex, several manufacturers told us one of two things: either they would be dropping support for Bristol Ridge processors on some systems, or they have had to increase the size of the BIOS chip in order to retain support.

Most motherboards in the market use a single 128 Mb (mega-bit, 16 megabytes) BIOS chip that has to contain all the data and code for the system to be able to detect the processor and train the memory to the correct frequency. It would appear that for some motherboard vendors, due to the features in their BIOS, are now running out of space. Because of the age of Bristol Ridge, and the fact that the processors were not widely distributed at retail in the first place, the range of processors seem to be getting the chop from certain motherboard models. 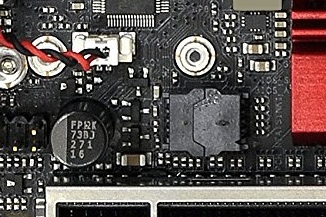 At least this BIOS chip is replaceable!

The simple way to support all the processors is to increase the size of the BIOS chip, by moving from 128 Mb to 256 Mb. At least two vendors told us that the price of these larger chips is more than double the 128 Mb chips. Not only this, but they have so many 128 Mb chips in stock already (or purchase agreements), it would not be economically feasible to switch and dump. One company, Biostar, said that they were implementing motherboards with two BIOS chips in a striped configuration, giving an effective capacity of 256 Mb, in order to solve this issue. The only downside here is that the system is using two BIOS chips, effectively doubling the cost to implement a BIOS on the motherboard. For low end systems, this is an additional cost that might push the product out of a competitive price range.

Another solution would be to bifurcate BIOS versions, giving one support for Bristol Ridge but not the latest processors, and a second for the latest. The danger here is that if a user flashes to the wrong version or the Bristol Ridge BIOS version might be put to legacy very quickly, and not receive relevant security updates if needed.

To date AMD has launched / announced a total of 45+ processors for the AM4 platform. This rises to 55 with the recent GE and Athlon models, and more if the BIOS listings about more Ryzen-2000 series processors are to be believed.

For context, we did some counting on our internal processor database, and the top sockets that should have interchangeable processors are as follows:

Judging by these numbers, the number of AM4 processors is actually relatively small compared to some of the big ones. Either that means the microcode per processor on AM4 is much larger, or the base code required for the platform is much larger.

The overall take-home message is that we will start seeing BIOSes that remove support for Bristol Ridge, and/or Bristol Ridge Pro, or we might end up with AM4 motherboards targeted towards certain processor families only. The best way to get around this would be for all motherboards to get a bigger BIOS chip (or use two chips and stripe), however that does not do much for the motherboards that are already on the market.

I should add that another way to solve this issue is to have simpler BIOS interfaces. The drive in recent years to have flashy all-singing and all-dancing UEFI interfaces has made the BIOS file bloom in size. It may be a case that some vendors will exchange features in the UEFI interface in order to support these chips.

People have asked questions about upcoming Ryzen CPUs, and if these motherboards might drop support for other chips as well. There are two ways to think about this: either the microcode for the Ryzen/Zen based chips has a lot of commonality that this shouldn't be too much of an issue, or we might see some BIOSes drop support for the Ryzen Pro CPUs, as they are not often sold at retail. I suspect that motherboard vendors will be moving quickly such that all future motherboards should not have any of these issues, however that doesn't say much about the current boards on the market.