We’ve been stuck in a bit of a rut with laptops lately. Intel has been offering solid CPU performance for the past several years, but their integrated graphics solution, while excellent for media playback and desktop usage, struggles under any sort of 3D load. Enter the Vega GPU in Ryzen.

This is full Vega as well. For a deep dive, check out the Vega launch article, but this U series SoC offers the same features as its bigger desktop cousins, such as Rapid Packed Math, the improved geometry engine, and of course, the media blocks, such as 10-bit HEVC hardware offload, and VP9 hardware as well.

The Acer Swift 3 was run through our standard laptop GPU suite, and unlike the Intel 15-Watt parts, we ran it through the full suite. We’re in the midst of introducing a 2018 laptop GPU suite, but like the CPU tests, it’s important to have more data even if the games are older.

Looking at our comparisons, we’ve got a wide range. The Surface Book 2 offers a very powerful NVIDIA GTX 1060 GPU, in the same 15-inch size as the Acer Swift 3. The Surface Pro tablet is one of the few models we’ve seen with Intel’s Iris GPU, offering double the execution units over the normal HD620 or UHD620 found in the ASUS ZenBook 3. 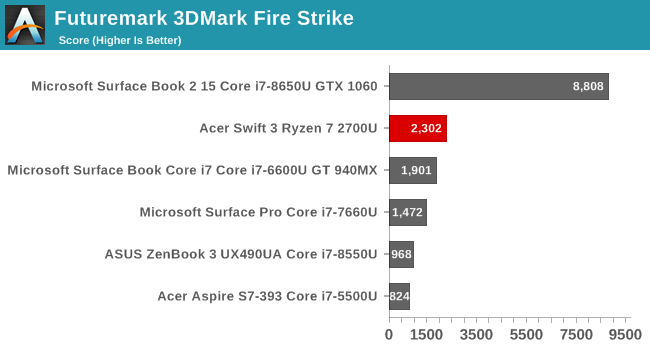 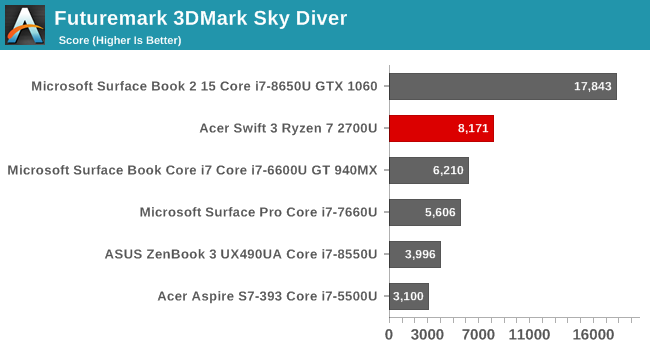 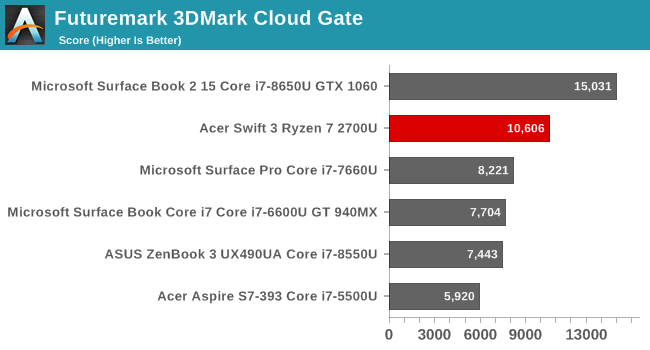 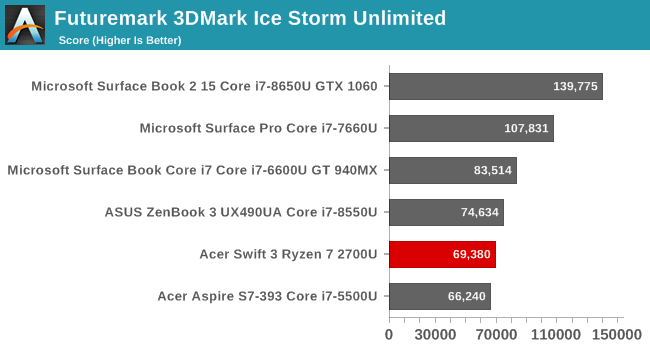 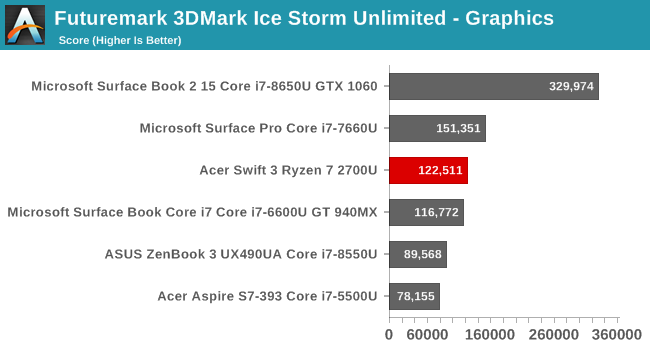 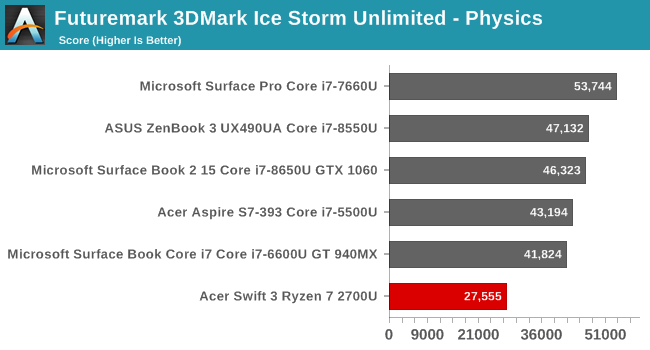 There’s a lot of interesting data to look at here. 3DMark offers several tests of increasing complexity, with the order of most demanding to least demanding being how they are presented above, with Fire Strike being the most demanding, and Ice Storm Unlimited the least.

Ryzen mops the floor with Intel’s GPU in any specification, including the Iris model. On Fire Strike, the CPU is the smaller factor, and the GPU runs away with it. As the tests get less demanding, they become more CPU bound though, and the less performant Zen cores bring down the overall results. That’s most obvious in the Ice Storm test, where we record the individual scores for GPU and CPU as well. The Physics result is a CPU bound test, and Intel’s ILP is clearly stronger. 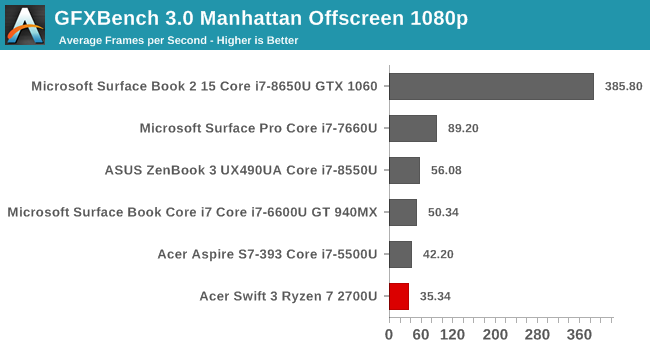 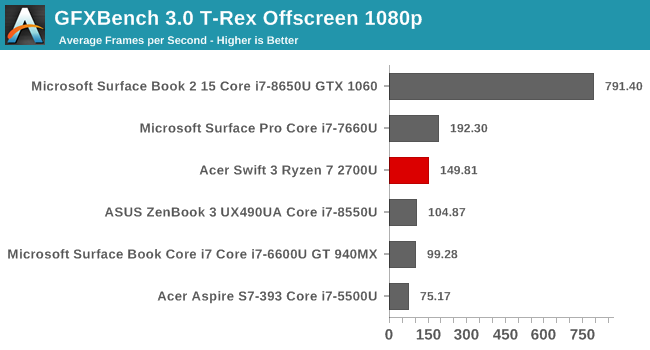 Although a benchmark geared towards smartphones and tablets, it’s always interesting to see how low-power laptops perform, even if the results are not 1:1 comparable. Here we seem to run into an issue with AMD’s OpenGL drivers, which are well behind in the Manhattan test compared to the Intel iGPU. Luckily for AMD, OpenGL isn’t a big focus right now, so despite the poor result, it’s not going to impact very many people. 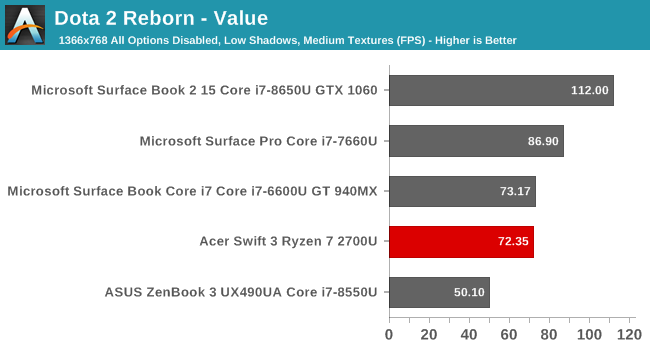 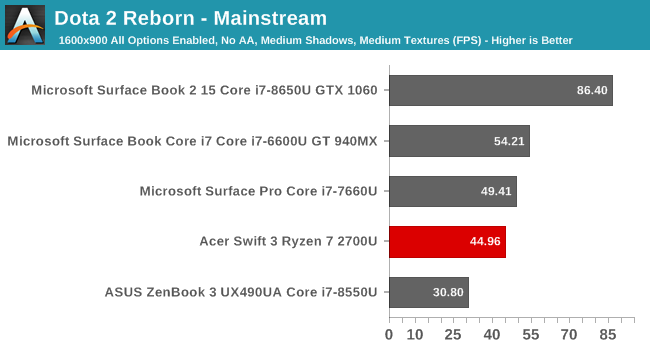 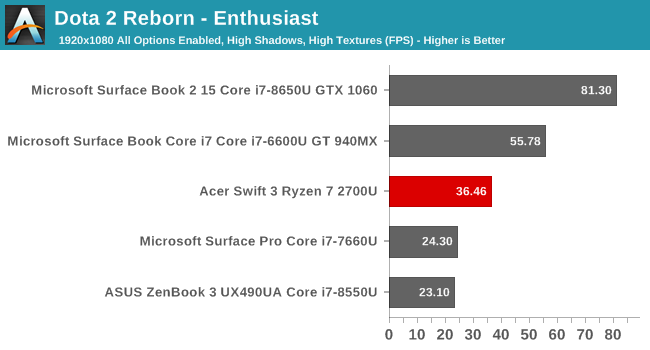 On most 15-Watt laptops, this is the only gaming benchmark we even test, because it’s one of the few that’s at least playable on low-end hardware. It’s actually CPU bound with even modest GPUs, but we can see the Ryzen 7 2700U easily surpasses the Core i7-8550U at all levels. The Surface Pro though with Intel Iris is able to stay ahead until the 1080p level thanks to the CPU performance and larger Iris GPU.

Although several years old now, the original Tomb Raider reboot is still a great looking game, and at maximum settings can be punishing to laptop GPUs. But it’s important to note that the Ryzen 7 is easily playable at low to medium settings.

Newer, and even more demanding, Rise of the Tomb Raider is still a bit out of reach for even the Ryzen integrated GPU.

Once again, Civ VI is playable on low settings, especially since it’s not a twitchy game.

It’ll be sad to put this game to rest in our test suite since we have a tremendous amount of data for it, but it’s a good test for the kind of game you could expect to play well on a device with an integrated Vega GPU, and the Ryzen 7 performs quite well unless you max out the settings.

While getting close to the limits of playable, you could get by on Shadow of Mordor on lighter settings.

This game was very playable on the integrated graphics, although at maximum settings it’s kind of on the edge.

For the longest time, we’ve been wondering if Intel’s GPU limits are due to architecture or TDP, since they’ve not really improved much over the years. Even the Iris graphics struggle. AMD has proven that theory wrong. Despite sharing just 15-Watts between the CPU and GPU, Ryzen 7 delivers respectable performance from the GPU, allowing gaming on integrated graphics with quite a bit of success. No, it can’t compete with the GTX 1060 in the Surface Book 2, but it does outperform the GT 940MX in the original Surface Book. The GPU in the Ryzen 7 2700U is just impressive.