Pete's Plugins to the Rescue

Configuring ePSXe and all the plugins that go along with it is more of an art than a science in some regards. Fortunately, there is a section of the ePSXe help file that has suggestions on where to start with settings for certain games. In the end, though, optimum image quality and performance only come from experimentation.

In choosing the plugins for our system, we wanted only the best. Everywhere we looked, we saw references to Pete Bernert and his PSX plugins. After taking a look at Pete's Homepage and playing around with some of the plugins he had created, we were convinced. Aside from writing high quality plugins, Pete is also a very cool guy and he had a lot of useful advice for us when we let him know that we would be tackling the issue of emulator benchmarking. 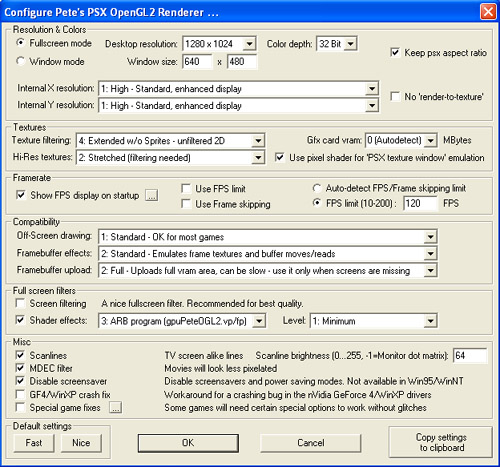 These are the settings that we specified in testing using Pete's OpenGL2 Plugin.


When we first took a look at Pete's OpenGL2 graphics plugin, we wanted to turn everything on, set to maximum and see what happened. Honestly, this isn't a good way to get anything useful done when working with an emulator. In fact, if all the different filtering options are enabled at the same time, what comes out is a blurry, fuzzy, nasty mess. In our quest for perfection, we humbly turned everything off and went through all the options one by one, slowly cranking up the settings and checking what effect they had on the two games that we would eventually end up testing with. Happily enough, we discovered that not everything needs to be turned on in order to end up with an indistinguishable rendering of either Final Fantasy IX or Gran Turismo 2. In order to limit the number of variables we were testing, we decided to stick with one list of settings that worked for both games (as shown above).

Here's a brief rundown of what some of the settings in Pete's OpenGL2 plugin do:

Internal X/Y resolution - This setting has the single largest impact on standard image quality that we saw. Native PlayStation resolution is very low and unless this setting is on high, images will be very pixilated and not very detailed. There are also very high settings which don't work on many cards, and really don't add as much as the step up from native resolutions to high resolutions.

Texture filtering - This setting determines what kind of filtering to do on different types textures. Adding texture filtering to 3D textures really helps, but since we are applying a full screen blur filter, the 2D filtering would just make things look fuzzier than we would like.

Hi-Res Textures - We can either choose "none", "2xSaI" or "stretched" here. 2xSaI is a popular filter for SNES emulators and works really well to smooth things out without introducing any blur. Unfortunately, 2xSaI diverges a bit from the original look and feel of the games on a television while incurring a bit more of a performance hit, so we decided to go with stretched and filtered hi-res textures (which does a good job of smoothing out pixilation without overly blurring things).

Off-screen drawing - Some games draw stuff off the screen and then put things back together when they need them. This is how Final Fantasy IX draws its battle system menus. Like the things says: standard should work for most games.

Framebuffer effects - Without setting this option to standard, the pre-battle swirls and some of the battle effects won't work in Final Fantasy IX. Full emulation doesn't seem to be necessary from any of the aspects of the game we tested.

Framebuffer uploads - This setting specifies how much direct uploading to the framebuffer the CPU can do. Setting this to full is useful for the Final Fantasy series, unless you don't mind missing some of the effects or minor details. This does have an impact emulator speed though.

Shader Effects - We chose to use an OpenGL ARB pixel shader that implements a full screen blur rather than the standard full screen filter (which is just a blur as well). Changing the level will increase or decrease the blur effect, but we find level one to work just fine. There are other shader options, but we stuck with the ARB option since the other useful shaders Pete provides are written in GLSlang (which only runs on ATI cards). Of course, it is important to note that since all the generic shaders that Pete writes are ARB shaders, ATI cards will have theoretically an easier time with them (though NVIDIA's unified compiler technology has improved a great deal since anyone really looked at ARB performance difference on the two architectures).

This brings us to my final point about Pete's plugins. Since Pete has an ATI Radeon 9700 card, Pete tests his programs on his ATI Radeon 9700 card. He is cool enough to write his generic stuff following ARB specifications, but this kind of setup is not optimal for NVIDIA GeForce FX cards. In this case, since the developer of the software isn't trying to sell something, Pete is not obliged commercially to support NVIDIA products as well as he supports ATI products. It also follows that NVIDIA wouldn't invest large amounts of time and energy in helping Pete support NVIDIA products. Where programmability issues are somewhat excusable on a commercial level (since NVIDIA invests time and money in game companies to help them write better code for the GeForce FX line), the sore spot is in independent development such as this. Here's to hoping that NVIDIA's upcoming line of cards will be easier from which to extract speed.