Our typical HTPC testing flow involves playing back files encompassing a range of relevant codecs, containers, resolutions, and frame rates. A note of the efficiency is also made by tracking GPU usage and power consumption of the system at the wall. Over the last year or two, the focus has been on using Kodi and MPC-HC with its built-in LAV filters for benchmarking. Even though we have had non-HDR 4K clips for some time now in our test suite, we have not subject them playback at native resolution. In order to augment our test suite, we have added two files, a 4Kp25 HEVC HDR stream in a MKV container, and a 4Kp60 VP9 Profile 2 HDR stream in a WebM container.

Out of all the options we evaluated, the TCL 55P607's in-built Roku platform is the only one capable of handling Dolby Vision videos. However, when we tried to play back a sample file, the Roku interface stalled in the retrieving stage after the appearance of the Dolby Vision logo. 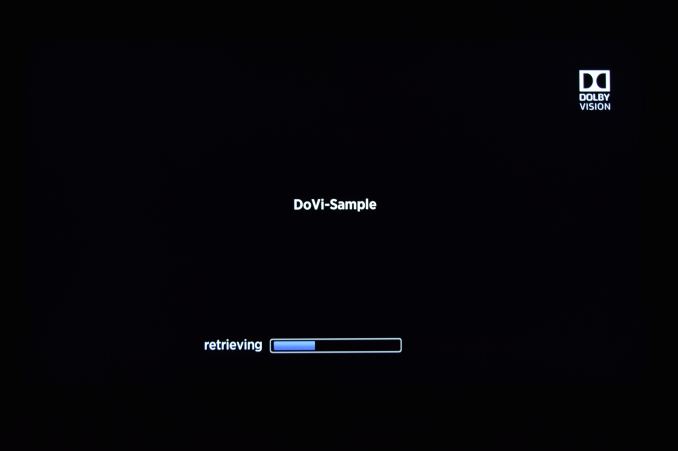 Due to the absence of reliable open-source editing and decoding tools for Dolby Vision in the PC space, its testing with local media files will have to wait.

The Roku Media Player app continues to be a disappointment for users with anything other than the standard H.264 / HEVC-based camcorder files. The following recorded clip shows its failure with some interlaced MPEG-2 and H.264 clips in TS containers. VC-1 is also not supported.

On the plus side, we have automatic switching to HDR for local files which have HEVC HDR content. On the othr hand, a VP9 Profile 2 HDR clip did not generate the mode switch.

We tracked the power consumption of the TV while the Roku interface tried playing back the various files in our test suite. It was not much of a surprise to find that Roku fails to play back many of the streams. The graph segments below corresponding to the files that didn't play back are just the display remaining idle in the Roku USB Player interface. 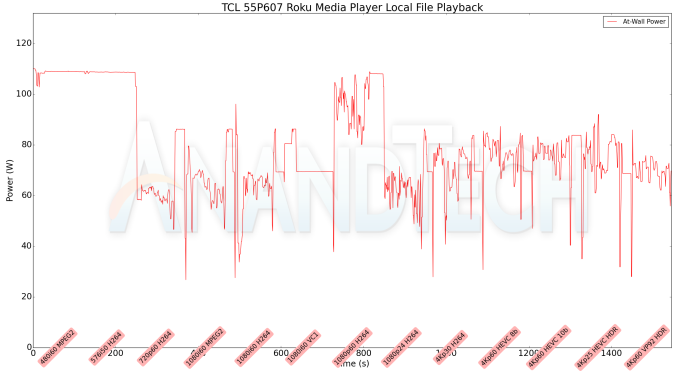 The NVIDIA SATV supports all files in our test suite except the one encoded in VP9 Profile 2. With Kodi, we even see the HEVC HDR file being decoded and sent to the display with the appropriate mode switch. 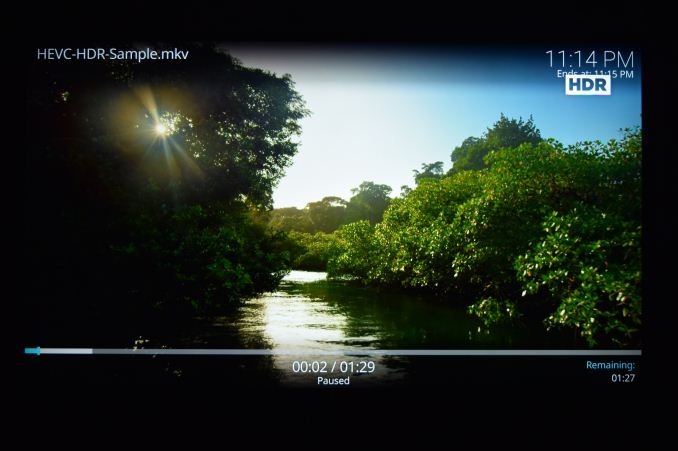 The power consumption of the SATV was tracked during the playback of each file in our test suite using Kodi 17.6. The segment corresponding to the VP9 Profile 2 file is just the duration for which the audio track was decoded and the Kodi UI remained idle. 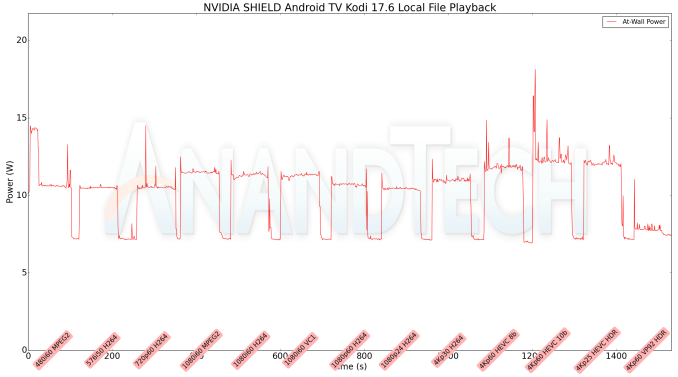 Moving on to the PC space, we first compare the DXVAChecker outputs for the three systems. The Zotac EN1080K with its GTX 1080 GPU does not support hardware decoding of VP9 Profile 2 videos. Even if a HDR stream were to be available, the system plays back only the non-HDR versions with the desktop in HDR mode.

We found the native Microsoft Movies & TV app to be capable of playing back HDR videos with the desktop in HDR mode. A comparison of playback using two different players in that mode is shown below. 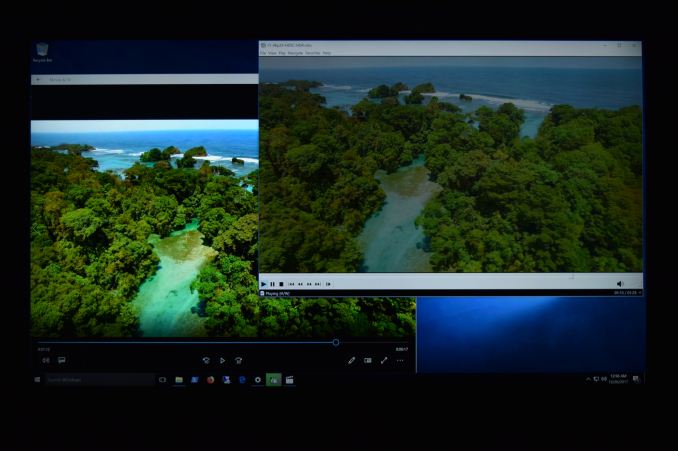 However, the playback of HDR files in non-HDR mode using the Microsoft Movies & TV App results in messed up colors. As such, we don't recommend the Movies & TV app for HDR file playback under all circumstances.

It is possible to use the madVR renderer in conjunction with a suitable player to shift the display to HDR mode independent of the OS setting. It is also supposed to bring the display back to the original state when exiting. We tested it out with MPC-HC and madVR v0.92.10 on the Zotac EN1080K. On the KBL-U systems, using madVR as the renderer resulted in evident dropped frames irrespective of the setting. On the Zotac EN1080K, we found that the latest NVIDIA driver release (which we absolutely had to use for Netflix 4K playback) seemed to have some issues with the restoration of the previous mode. With certain settings, the colors seemed to get crushed significantly after madVR triggered the mode change.

In fact, the only reliable combination in which we could get playback of the files in the appropriate mode was to set the OS toggle for HDR, and allow madVR to pass through the HDR metadata directly to the display (something that the madVR author specifically mentions as unsuitable for purists). We do not have automatic mode switching or even identification of HDR when using Kodi (as of v17.6). With madVR and MPC-HC, it is possible, but the consumer experience may vary.

In our opinion, HDR local media playback is yet to reach a stable state with commonly used software combinations. CyberLink's PowerDVD 17 also supports automatic HDR mode switch for playback of local files on Intel GPU-based systems. We found that it worked well in both of the KBL-U PCs, but, PowerDVD unfortunately refused to play back the VP9 Profile 2 files on those systems.

The power consumption of the three PCs during the playback of each file in our test suite using Kodi 17.6 was recorded. The same was done using the Microsoft Movies & TV app also, but, we found significant power consumption change (up to 10W at the wall) when the control overlay appeared on the screen. As such, we believe that the Microsoft Movies & TV app is not a reliable way to determine media processing efficiency of any system. 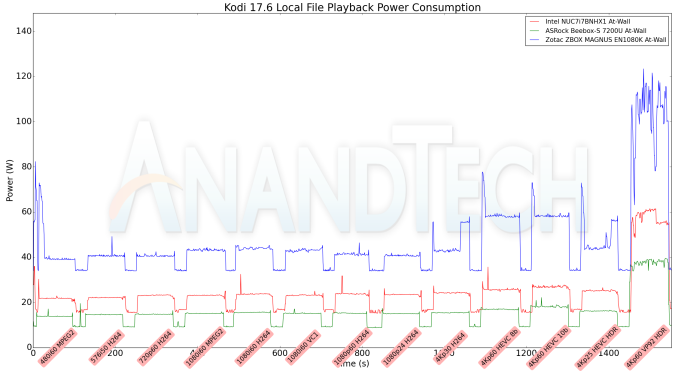 A similar graph for the madVR playback case in the Zotac ZBOX EN1080K (with OS HDR toggle set and madVR configured for HDR passthrough in full screen windowed mode) is presented below. 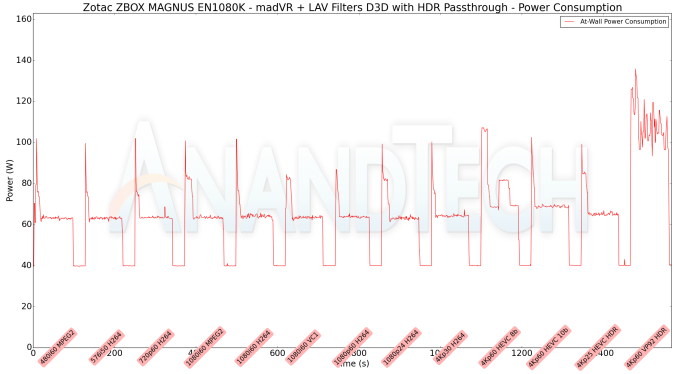 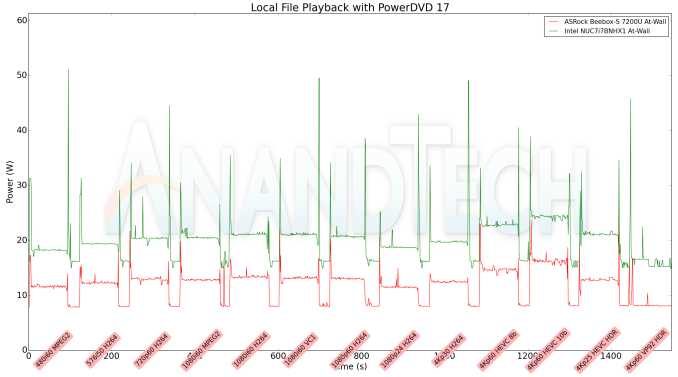 In general, we find that the Zotac system consumes a lot of power, but, it also performs a lot better compared to the KBL-U systems when advanced HTPC requirements like madVR rendering are considered. The HDR ecosystem is just getting started and we are waiting for things to reach a more matured state before doing a detailed analysis of the playback of local HDR files in PCs.