As always, we'll take a look at inter-related metrics of power, temperature and noise. Particularly with noise, these factors can render unwanted even a decently-performing card, a situation that usually goes hand-in-hand with high power consumption and heat output. As this is a new GPU, we will quickly review the GeForce GTX 1070 Ti's stock voltages as well.

With the exception of a slightly higher idle voltage, everything remains the same in comparison to the GTX 1080 and 1070. The idle voltage actually matches the GTX 1080 Ti idle voltage, but isn't particularly significant as it seems to vary from card to card. In comparison to previous generations, these voltages are exceptionally lower because of the FinFET process used, something we went over in detail in our GTX 1080 and 1070 Founders Edition review. As we said then, the 16nm FinFET process requires said low voltages as opposed to previous planar nodes, so this can be limiting in scenarios where a lot of power and voltage are needed, i.e. high clockspeeds and overclocking.

Fortunately for NVIDIA, GP104 has always been able to clock exceptionally high, at least the good chips, so with a slight knock on efficiency in the form of a 180W TDP, the GTX 1070 Ti Founders Edition is also able to clock exceptionally high, and then a little more. I also suspect the maturity of TSMC's 16nm FinFET process is playing a part here, but the card's higher TDP and NVIDIA's clockspeed choices make it hard to validate that point. 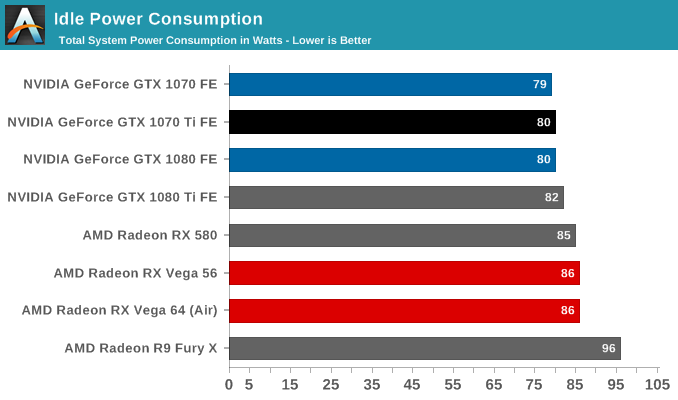 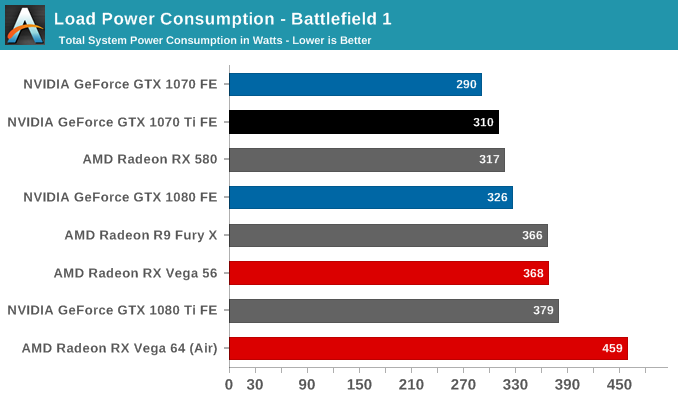 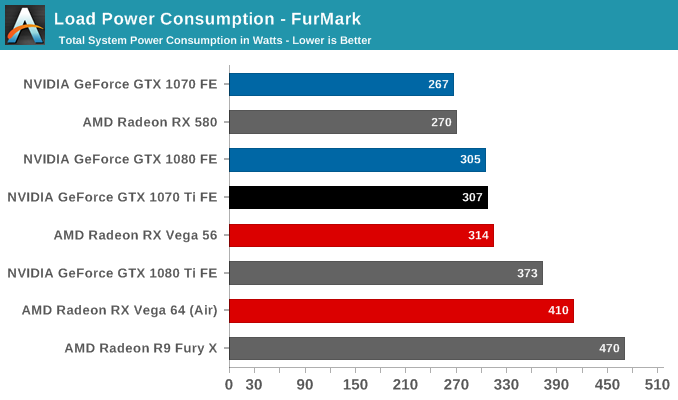 As those higher clockspeeds bear out in power, heat, and noise, there are no surprises here with the GTX 1070 Ti Founders Edition. We've already seen several variations in the aforementioned Founders Edition cards. Here, the blower and vapor chamber are more than adequate for what the card can put out, and in turn lessening the work (and noise) the fan needs to do.

Given the higher 180W TDP, the card can also be closer to GTX 1080 levels of power consumption if need be, though with measurements at the wall, the accuracy of quantification is less than ideal. But in any case, the GTX 1070 Ti has no real necessity to be a power-sipper at this performance range, for which the crown has already gone to the GTX 1070. On top of that, drops in power efficiency will likely not be noticable when compared to its RX Vega competition, or even just against RX Vega 56, whose Battlefield 1 power consumption at the wall is closer to the GTX 1080 Ti FE than the GTX 1080, let alone the GTX 1070 Ti FE. 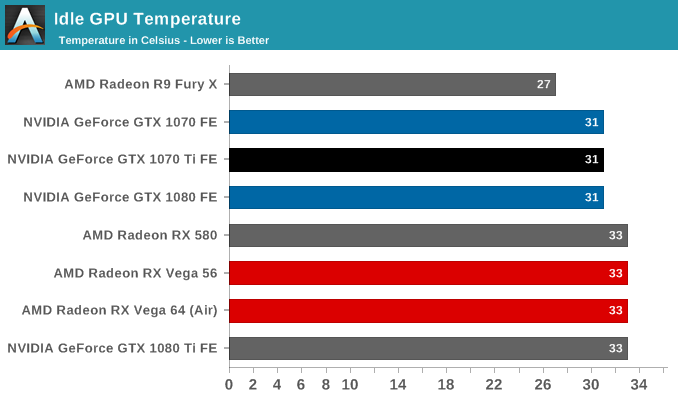 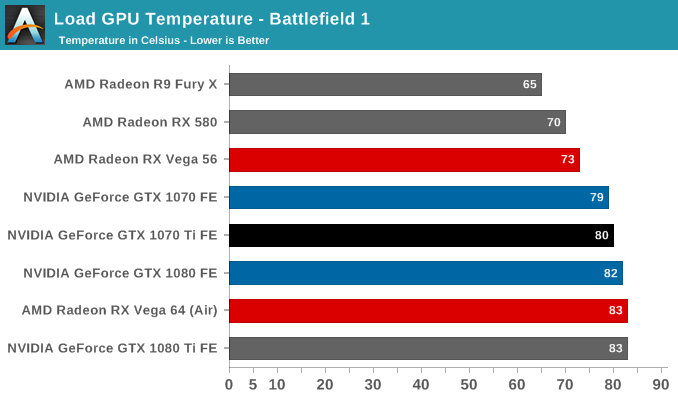 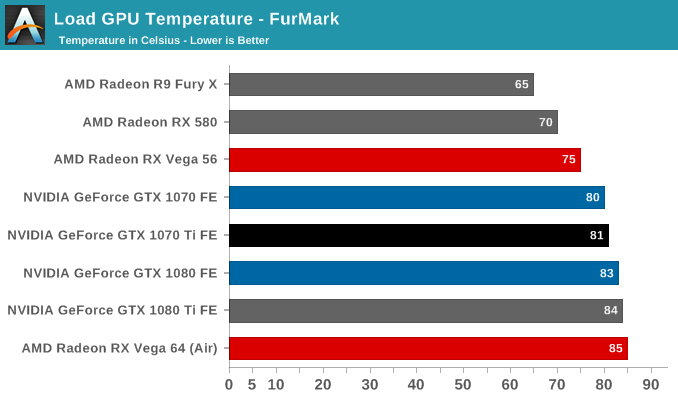 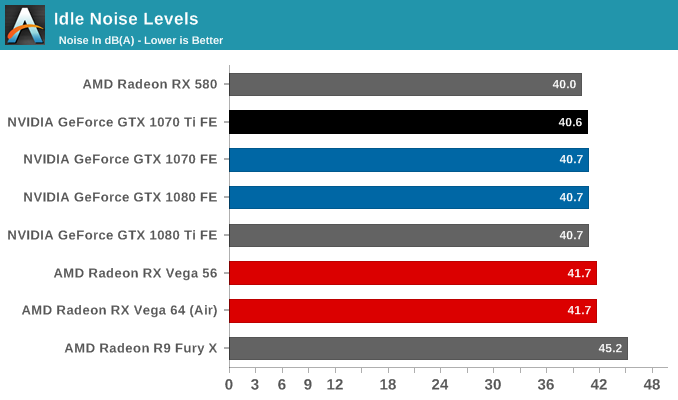 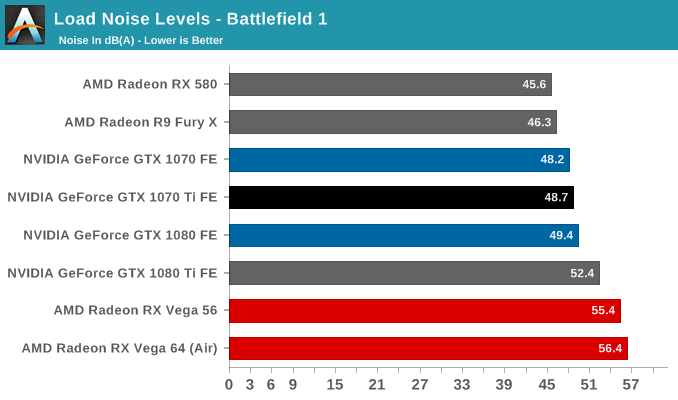 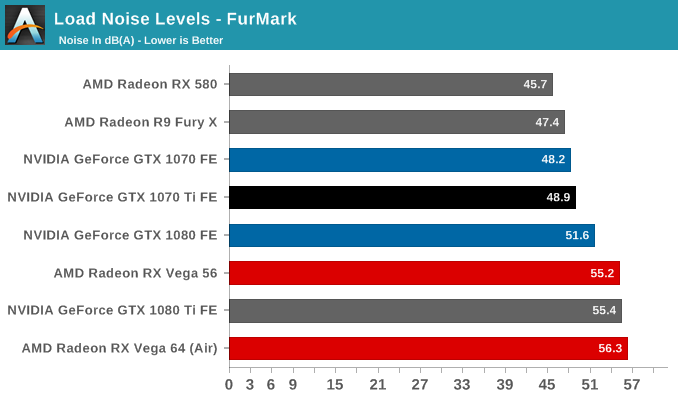