Our next board partner in the roundup is MSI. MSI brings ten Z370 motherboards to the table, from the entry-level Z370-A Pro to the flagship Z370 Godlike Gaming. We have divided these up by MSI's existing product stack delineation. We'll start with the Enthusiast Gaming line, then cover Performance Gaming, Arsenal Gaming, and Pro lineups.

The Godlike Gaming is an E-ATX sized board which comes with a lot of features. One of the first features that stuck out in my mind is a triple Killer E2500 LANs + Killer Wi-Fi, along with U.2 support and support for five M.2 based devices when using the included PCIe riser card. It also comes with a beefy power delivery and a Game Boost knob for easy overclocking. Can we still turn it up to 11? (Ian: yes, it goes up to 11)

The Z370 Godlike Gaming’s appearance is an all-black PCB with dark gray shrouding all over the board. Not only is the back panel IO and audio section covered, so is the right side of the board starting from the chipset heatsink on all the way up to the onboard power, reset, and game boost overclocking buttons. RGB LEDs find their way under these shrouds as well as under the PCH heatsink and miscellaneous places around the board. There are additional headers on the board for adding more RGB, all of which are controlled my MSI’s Mystic Light App. The VRM heatsinks are large hunks aluminum but appear to not be connected to each other. All the full-length PCIe and memory slots are reinforced, as well as the three onboard M.2 slots which are using MSI’s M.2 Shield to help cool the drives. 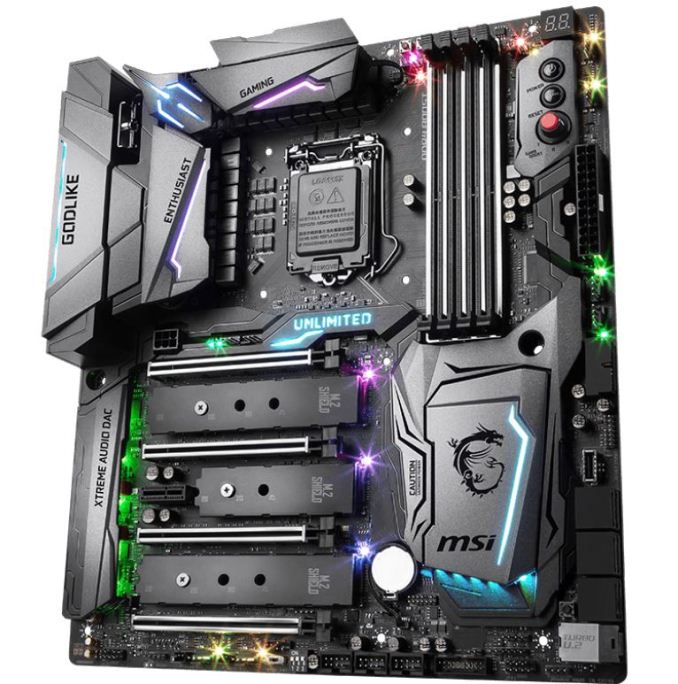 Memory slot support is the platform standard here as well with four slots supporting up to 64GB, up to a supported speed of DDR4-4133, which is one above the other boards in the product stack which max out at DDR4-4000. All the memory slots are steel reinforced and use a one-sided locking mechanism. The board has a total of four full-length reinforced PCIe slots and one x1 slot, which combined can handle 2-way SLI and up to 4-Way AMD Crossfire. This means that the CPU uses an x8/x4/x4 layout from the processor, using slots 1, 2, and 4, while the bottom full-length slot is from the chipset. Slots 1 and 4 are used in a dual GPU configuration allowing for adequate spacing between the cards for better cooling, so the options become x16/0/0 for single cards, x8/0/x8 for dual cards, and x8/x4/x4 for triple cards.

The storage options on this board are plentiful in number and type. On the board are three PCIe 3.0 x4 M.2 slots, all using MSI's M.2 Shield. There is also a possibility to add two more M.2 drives through an add-in card, which is bundled with the board in certain regions. SATA support runs the same as the other boards at six and supports RAID 0, 1,5, and 10. A fairly unique addition is a single U.2 slot. The M.2 slots, U.2 port, and SATA ports are partly switched (using one might disable something else), so be sure to check the manual for the breakdown.

There are a total of 10 fan headers on the board scattered all around the board; all of which can be controlled via the BIOS or MSI Command Center. Audio functionality is handled by the Realtek ALC1220 codec and includes Nichicon and WIMA audio caps as well as an ESS E9018 DAC for driving headphones. The Z370 Godlike also has a debug LED, power and reset buttons, as well as the Gameboost overclocking knob.

MSI quadrupled down on the Rivet Networks Killer products and have three E2500 NICs on board as well as Killer 1535 Wireless LAN and Bluetooth (4.1) module. This is because the board can act like a networking switch through the updated Killer software: users can have the motherboard act as a passthrough for other devices set up nearby, such as a console or a NAS. In order to enable this feature, Killer required the motherboard to have at least three of its network controllers. If the main internet access is acquired through one of the ethernet ports, the motherboard can use the Wi-Fi module as a local access point to the network, enabling wireless devices around the system. The only drawback to this feature is that the PC needs to be on and awake at all times. 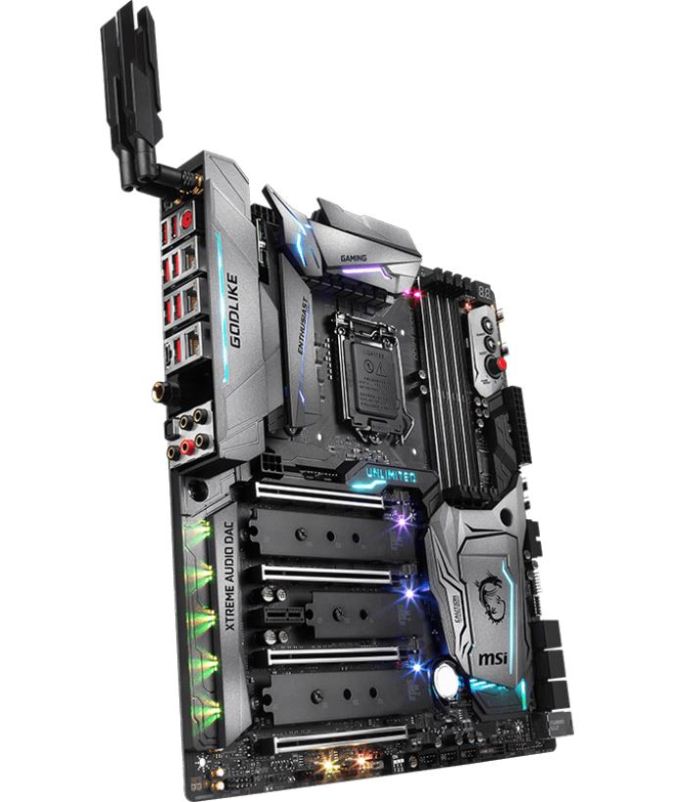 There are three USB3.1 (10 Gbps) ports handled by the ASM3142 controller with one Type-A and one Type-C on the back panel and another Type-C port available through the internal connector. We also see two native USB 3.1 (5Gbps) ports on the rear panel and four controlled by the ASM1074 hub. The rest are available through internal USB connectors. The back panel IO contains the Killer Wi-Fi module, a CMOS reset button, combination PS/2 port, the three Killer NICs, a plug audio stack with SPDIF and a 6.3mm headphone jack. Because the back panel does not have video outputs, a discrete GPU is a requirement for this motherboard.