While AMD has a solid game plan in place in terms of products, getting those cards to gamers may be the trickier proposition. For the last few months the company has been selling every last Polaris 10 GPU they can produce, which is not a bad situation to be in for the underdog GPU manufacturer. However those great sales have not come courtesy of gamers, but rather of cryptocurrency miners, who have been riding a wave of high coin values.

As a result, for gamers this has been the summer of waiting. Miner demand has rapidly depleted the video card market, sending prices spiking on those cards that remain. Unfortunately this has come at the cost of gamers, who have been left with few options besides waiting for more cards to become available, or pay sometimes vastly inflated prices for mid-range and enthusiast cards. Worse still, it has reached a point where it’s impacting NVIDIA card pricing and availability as well, so any value-priced GeForce cards are going just as quickly.

Consequently, for the Vega launch AMD has significant concerns about whether they’ll be able to keep cards from getting scooped up by miners. The problem is one of pure economics – video cards are downright cheap for the amount of silicon they come with – which limits AMD’s options here. If Vega cards are good at mining, then miners will buy them until the market reaches a new equilibrium, one where everyone pays more. AMD has a counterplan in place with their Radeon Pack bundles (more on this in a minute), but ultimately AMD is not in control of Vega demand.

The good news is that as it stands right now, it’s looking like Vega-based cards aren’t going to be especially good at mining, dodging the problem Polaris continues to face. However AMD is also recognizes that the biggest groups engaging in cryptocurrency mining have significant resources to throw into optimizations – including firmware modifications – which means that miners can’t be counted out quite yet. Even if Vega doesn’t perform well with current coins, all it would take is for another Vega-friendly coin to spike in price to start the whole process over again.

Moving on, let’s talk about the competitive positioning of these cards and how AMD will be making them available to the public. With the RX Vega series, AMD is taking a direct shot at the heart and soul of NVIDIA’s enthusiast range of video cards, the GeForce GTX 1080 and GTX 1070.

We’ve previously been told to expect the Vega 64 to trade blows with the GTX 1080, and AMD is pricing it accordingly. The bare card will have an official MSRP of $499, which is the same as the official MSRP of the GTX 1080. In practice, the GTX 1080 has been running for around $30 more than that due to the effects of miner demand. So if the Vega 64 launches at $499 and stays at that price, it would undercut the GTX 1080 in price by a small amount.

Meanwhile AMD is a lot more gung-ho on the Vega 56, pricing it aggressively and stating that they expect it to take a solid lead over the GeForce GTX 1070. Complicating matters here significantly is that the GTX 1070 has been particularly popular with miners, and as a result market prices are well off of its official $379 MSRP. MSRP-to-MSRP, Vega 56 versus GTX 1070 is a very interesting fight, but at the GTX 1070’s market prices it’s a different matter. If AMD actually gets the Vega 56 out at $399 and holds it there, they’d have a significant price advantage and decent performance advantage over the GTX 1070, giving them a strong position as the value choice. However with Vega 56 not set to launch for another two weeks, there are a lot of “ifs” in the above statements and we’ll have to wait to see where retail prices actually land. 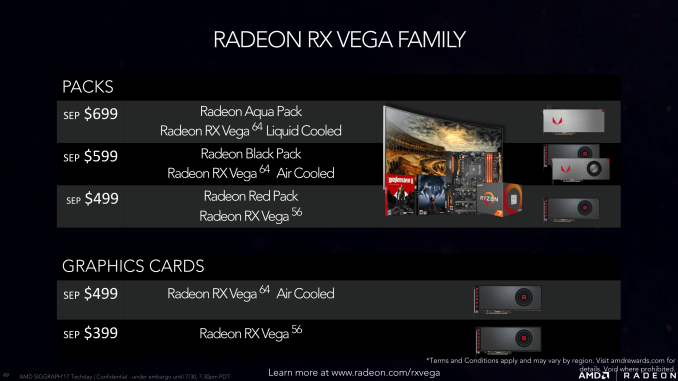 Throwing one last complication into matters, as part of their efforts to stymie cryptocurrency miners, AMD is offering RX Vega cards both with and without bundles. The latter point is going to be especially important, because these are no ordinary bundles. But if you just want a card – full stop – then AMD will be selling both the Vega 56 and Vega 64 stand-alone. These cards will go for $399 and $499 respectively. 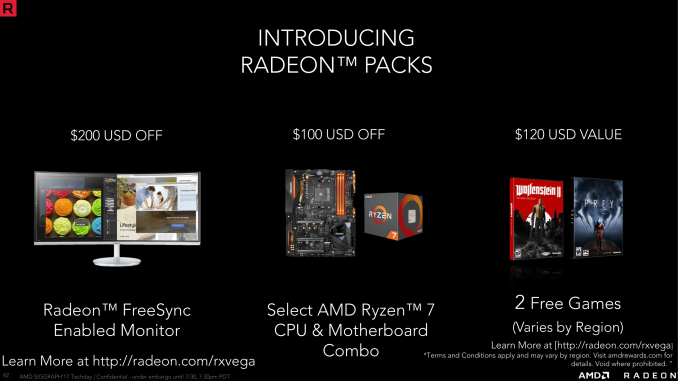 Update: As of 10am ET, Newegg's entire allocation of Vega 64 cards has sold through. This includes the stand-alone cards and the bundled cards. Indications are that Newegg's stock of cards sold through in under 15 minutes.