Dell continues to offer two choices of battery capacity with the XPS 15 lineup. If you opt for a model with a spinning hard drive, that drive requires space that is replaced with battery capacity if you choose a straight SSD model. One big change from the XPS 15 9550 and the latest 9560 model is the size of the battery though, which has increased from an 84 Wh model to a 97 WH version, which is right up against the upper limits allowed in a laptop. This 15.5% larger battery should result in 15.5% longer battery life, all other factors being equal, however we’ve also switched from a Skylake Core i7-6700HQ and GTX 960M (with Optimus) in the previous version, to a Core i7-7700HQ and GTX 1050 (with Optimus) in the current 9560 model, so we’ll see how that plays out.

To test battery life, we have a couple of different tests that we perform on all machines. The first is our 2013 light web browsing test, which is far too light for today’s web, so it’s only here for a data point against older laptops. We’ve also got our new 2016 web browsing test, which is a higher workload. Finally, movie playback is done as well. All testing is done with the display at 200 nits.

Our firs test is four web pages, loaded in a loop every minute. As processors and browsers have gotten more efficient, this has become a pretty light workload, but it’s still the test we have the most data points for. As you can see, the 15% more battery capacity gives a result that is 22% higher than the outgoing model, so Kaby Lake and the other changed components are a bit more efficient as well. This result is about nine hours of runtime, which isn’t too bad for a UHD resolution laptop with a quad-core CPU and discrete GPU, but a long way from the 19 hours claimed by Dell. It would make sense to see the FHD version of this laptop do a lot better in this test though, with a smaller gamut, and much less pixel density.

Our more demanding web test knocks quite a bit of time off of the result, and we don’t have the old 9550 to compare it against here since this test wasn’t run on it, but it is a decent result for a large display notebook. 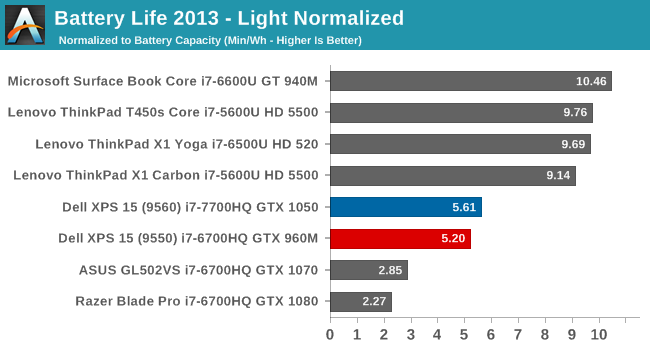 Removing the battery capacity from the equation allows us to check out the efficiency of the platform, and unsurprisingly, the XPS 15 is no where near as efficient as an Ultrabook with a U series dual-core CPU. It does make a slight gain on the previous generation though, and is much more efficient than a gaming notebook.

The first result is simply the number of minutes the laptop can loop a movie at 200 nits, and the Tesseract score is how many times you can play back a long movie, which in this case is The Avengers. The XPS 15 should work well for travel, with it able to play a couple of very long movies in a row before giving up the ghost.

The other half of the story with battery life is charge time. This is always non-linear, with much higher charging rates if the battery is very low, but all laptops end up with a trickle charge to get to 100%, to avoid damaging the battery. With a larger capacity battery than the outgoing model, but the same AC adapter, expectations are for a longer charge time. 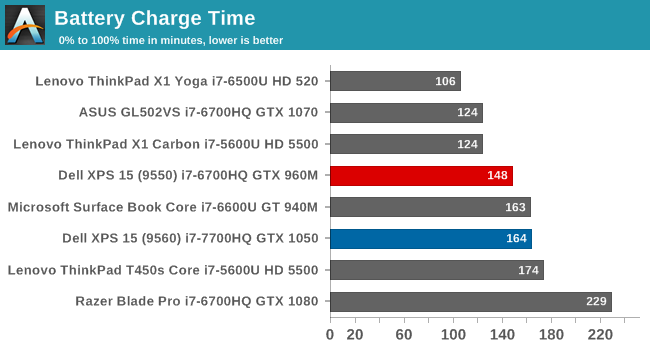 That is the case. The XPS 15 9560 takes a few minutes more to charge completely. Percentage wise, the 15% larger battery takes about 11% longer to charge, which is 16 minutes.