Networking and storage are two major aspects which influence our experience with any computing system. This section presents results from our evaluation of these aspects in the ECS LIVA-ZN33. On the storage side, one option would be repetition of our strenuous SSD review tests on the drive(s) in the PC. Fortunately, to avoid that overkill, PCMark 8 has a storage bench where certain common workloads such as loading games and document processing are replayed on the target drive. Results are presented in two forms, one being a benchmark number and the other, a bandwidth figure. We ran the PCMark 8 storage bench on selected PCs and the results are presented below. Note that these benchmarks were run with the SSD as the primary drive andthe eMMC mounted as a secondary drive. PCMark 8 allows specification of the logical drive for benchmarking. The storage workload was run twice (once for the SSD and once for the eMMC partitions). Both results are presented in the graphs below. 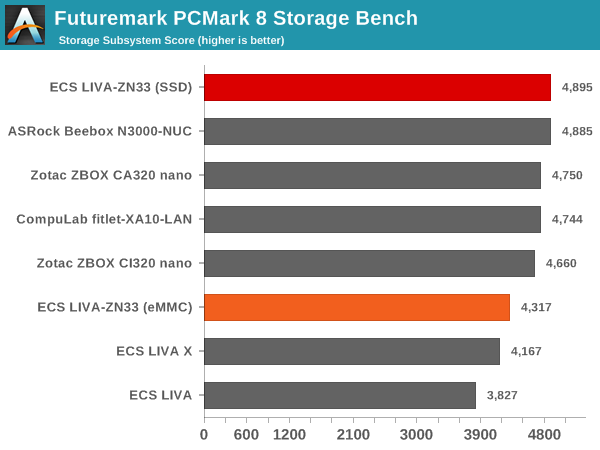 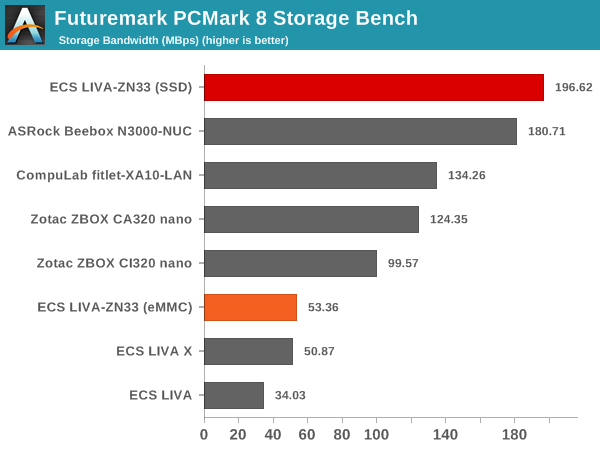 As expected, eMMC performance can't obviously match up to the SSD. However, as the storage subsystem score shows, the difference is not acute for light home / office use.

We also ran CrystalDiskMark 5.1.2 x64 in the eMMC-only configuration to get some best-case numbers for different artificial workloads. 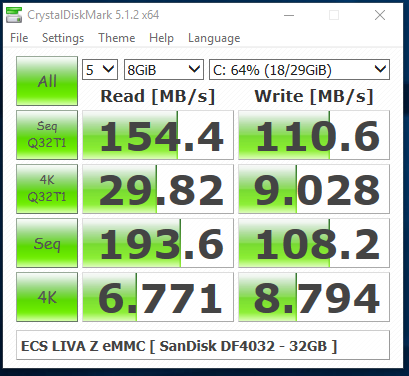 On the networking side, we restricted ourselves to the evaluation of the WLAN component. Our standard test router is the Netgear R7000 Nighthawk configured with both 2.4 GHz and 5 GHz networks. The router is placed approximately 20 ft. away, separated by a drywall (as in a typical US building). A wired client is connected to the R7000 and serves as one endpoint for iperf evaluation. The PC under test is made to connect to either the 5 GHz (preferred) or 2.4 GHz SSID and iperf tests are conducted for both TCP and UDP transfers. It is ensured that the PC under test is the only wireless client for the Netgear R7000. We evaluate total throughput for up to 32 simultaneous TCP connections using iperf and present the highest number in the graph below. 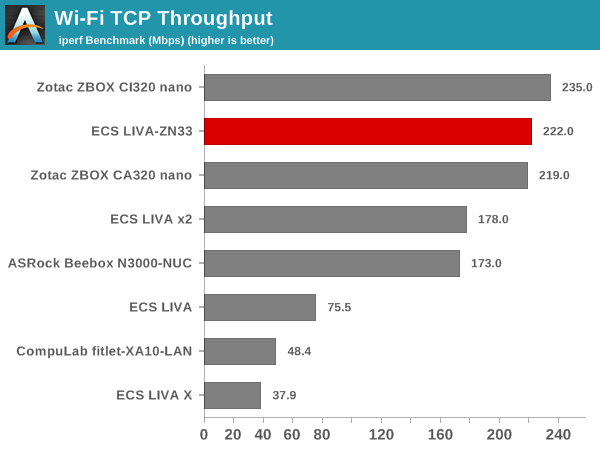 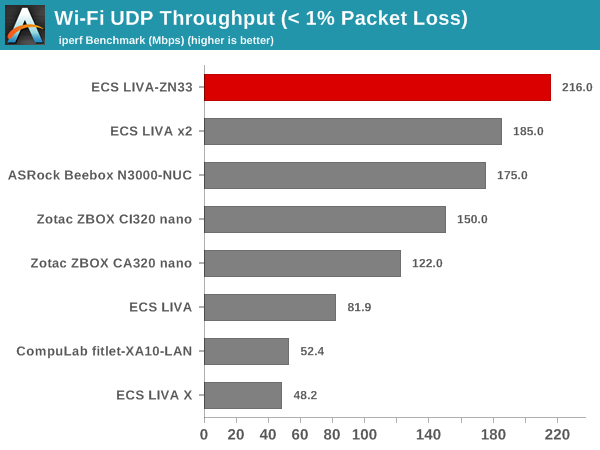 All the considered PCs use a 1x1 WLAN configuration. The Intel AC3165 performs up to its potential and the antenna placement / plastic chassis ensures that the bandwidth numbers for the ECS LIVA Z are quite good compared to the other systems in the comparison list.