One of the more unusual aspects of the Pascal architecture is the number of different memory technologies NVIDIA can support. At the datacenter level, NVIDIA has a full HBM 2 memory controller, which they use for the GP100 GPU. Meanwhile for consumer and workstation cards, NVIDIA equips GP102/104 with a more traditional memory controller that supports both GDDR5 and its more exotic cousin: GDDR5X.

A half-generation upgrade of sorts, GDDR5X was developed by Micron to further improve memory bandwidth over GDDR5. GDDR5X further increases the amount of memory bandwidth available from GDDR5 through a combination of a faster memory bus coupled with wider memory operations to read and write more data from DRAM per clock. And though it’s not without its own costs such as designing new memory controllers and boards that can accommodate the tighter requirements of the GDDR5X memory bus, GDDR5X offers a step in performance between the relatively cheap and slow GDDR5, and relatively fast and expensive HBM2. 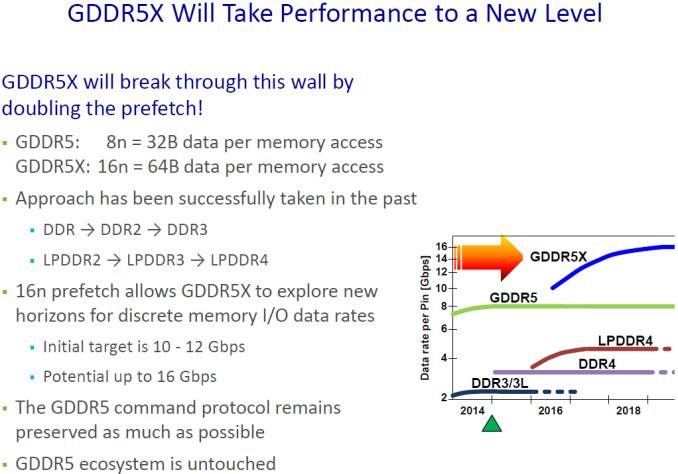 With rival AMD opting to focus on HBM2 and GDDR5 for Vega and Polaris respectively, NVIDIA has ended up being the only PC GPU vendor to adopt GDDR5X. The payoff for NVIDIA, besides the immediate benefits of GDDR5X, is that they can ship with memory configurations that AMD cannot. Meanwhile for Micron, NVIDIA is a very reliable and consistent customer for their GDDR5X chips.

When Micron initially announced GDDR5X, they laid out a plan to start at 10Gbps and ramp to 12Gbps (and beyond). Now just under a year after the launch of the GTX 1080 and the first generation of GDDR5X memory, Micron is back with their second generation of memory, which of course is being used to feed the GTX 1080 Ti. And NVIDIA, for their part, is very eager to talk about what this means for them.

With Micron’s second generation GDDR5X, NVIDIA is now able to equip their cards with 11Gbps memory. This is a 10% year-over-year improvement, and a not-insignificant change given that memory speeds increase at a fraction of GPU throughput. Coupled with GP102’s wider memory bus – which sees 11 of 12 lanes enabled for the GTX 1080 Ti – and NVIDIA is able to offer just over 480GB/sec of memory bandwidth with this card, a 50% improvement over the GTX 1080.

For NVIDIA, this is something they’ve been eagerly awaiting. Pascal’s memory controller was designed for higher GDDR5X memory speeds from the start, but the memory itself needed to catch up. As one NVIDIA engineer put it to me “We [NVIDIA] have it easy, we only have to design the memory controller. It’s Micron that has it hard, they have to actually make memory that can run at those speeds!”

Micron for their part has continued to work on GDDR5X after its launch, and even with what I’ve been hearing was a more challenging than anticipated launch last year, both Micron and NVIDIA seem to be very happy with what Micron has been able to accomplish with their second generation GDDR5X memory. 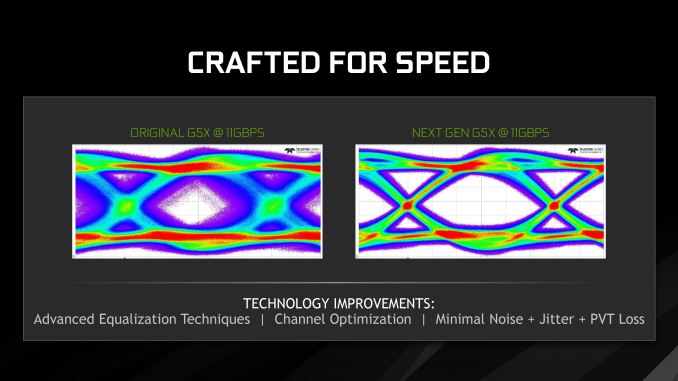 As demonstrated in eye diagrams provided by NVIDIA, Micron’s second generation memory coupled with NVIDIA’s memory controller is producing a very clean eye at 11Gbps, whereas the first generation memory (which was admittedly never speced for 11Gbps) would produce a very noisy eye. Consequently NVIDIA and their partners can finally push past 10Gbps for the GTX 1080 Ti and the forthcoming factory overclocked GTX 1080 and GTX 1060 cards.

Under the hood, the big developments here were largely on Micron’s side. The company continued to optimize their metal layers for GDDR5X, and combined with improved test coverage were able to make a lot of progress over the first generation of memory. This in turn is coupled with improvements in equalization and noise reduction, resulting in the clean eye we see above.

Longer-term here, GDDR6 is on the horizon. But before then, Micron is still working on further improvements to GDDR5X. Micron’s original goal was to hit 12Gbps with this memory technology, and while they’re not there quite yet, I wouldn’t be too surprised to be having this conversation once again for 12Gbps memory within the next year.

Finally, speaking of memory, it’s worth noting that NVIDIA also dedicated a portion of their GTX 1080 Ti presentation to discussing memory capacity. To be honest, I get the impression that NVIDIA feels like they need to rationalize equipping the GTX 1080 Ti with 11GB of memory, beyond the obvious conclusions that it is cheaper than equipping the card with 12GB and it better differentiates the GTX 1080 Ti from the Titan X Pascal. 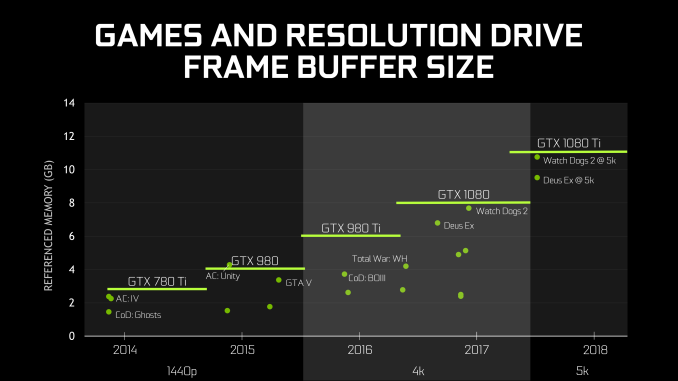 In any case, NVIDIA believes that based on historical trends, 11GB will be sufficient for 5K gaming in 2018 and possibly beyond. Traditionally NVIDIA has not been especially generous on memory – cards like the 3GB GTX 780 Ti and 2GB GTX 770 felt the pinch a bit early – so going with a less-than-full memory bus doesn’t improve things there. On the other hand with the prevalence of multiplatform games these days, one of the biggest drivers in memory consumption was that the consoles had 8GB of RAM each; and with 11GB, the GTX 1080 Ti is well ahead of the consoles in this regard.