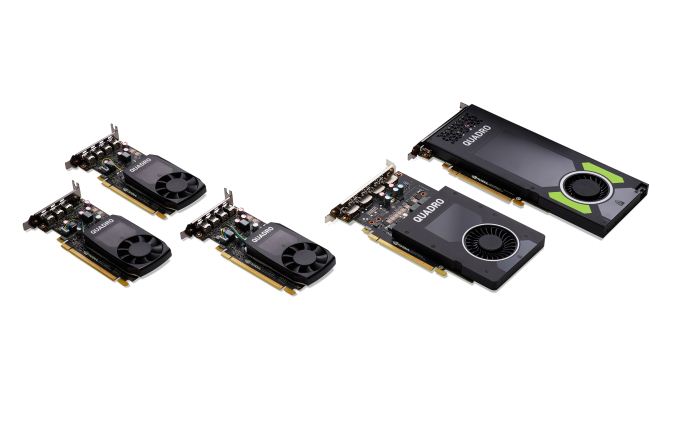 As we’ve already covered the Pascal Quadro family feature set in some detail with the Quadro P6000 launch, I won’t go over it in great depth here. But at a high level Pascal and the cards based on it bring with them a few core improvements over previous generation Maxwell and Kepler cards. This includes much greater performance thanks to the smaller 16nm manufacturing process and resulting wider GPUs, single-port support for 5K@60Hz monitors thanks to DisplayPort 1.4, and Simultaneous Multi-Projection (SMP) for VR. 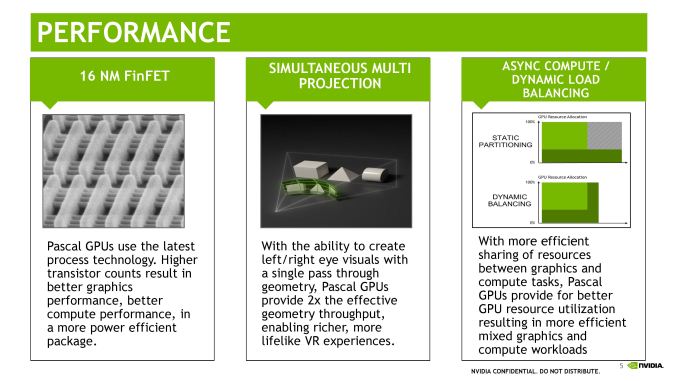 Moving on to the products then, the five cards covered here are being launched to replace their Maxwell M-series cards in the same segments. Over the years NVIDIA has worked out a distinct price/feature/TDP structure to their Quadro lineup, with this latest generation of cards meant to slot right into that. 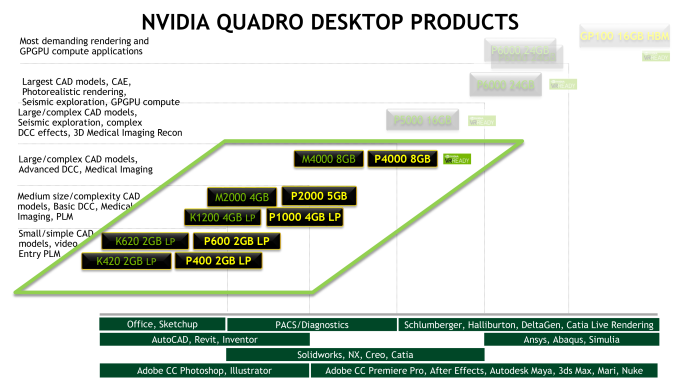 At the mid-range of the market are the Quadro P4000 and P2000. As the more powerful of the two, the Quadro P4000 is based on a cut-down GP104 GPU, the same GPU used in the Quadro P5000. However unlike the P5000, the P4000 has been cut down to size as a single-slot card. With respect to performance on paper it should deliver right around 2x the performance of the M4000, and it can do so with a TDP of 105W, 15W lower than its predecessor. It is also the lower-tier card that NVIDIA still classifies as VR ready; below the P4000 they don’t recommend their cards for VR development. 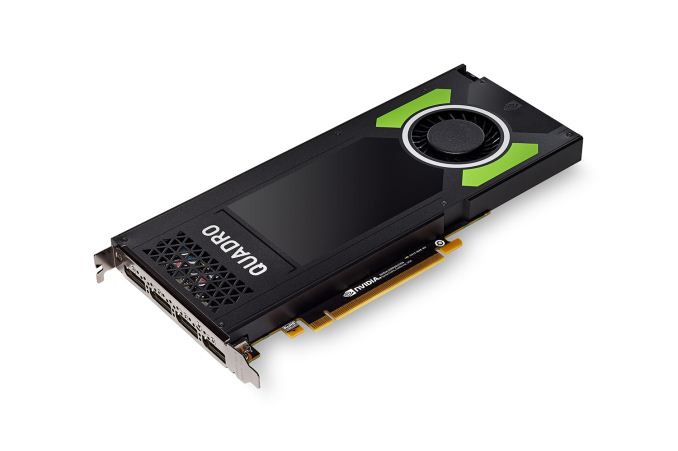 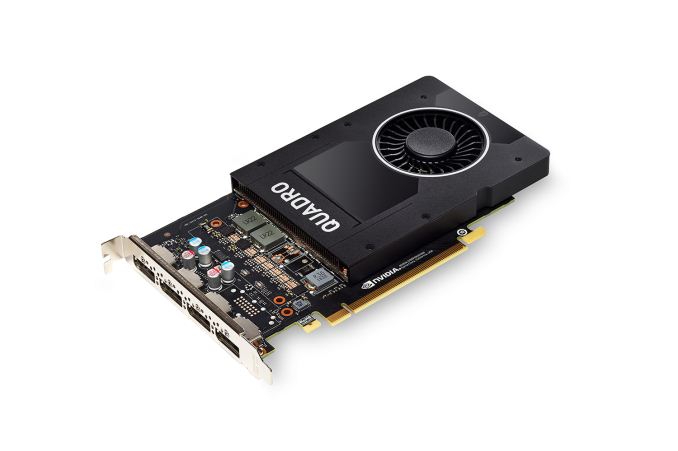 Meanwhile replacing the Quadro M2000 is the Quadro P2000. This card is in the same single-slot form factor as the P4000, but it drops down in power and performance, being built off of a GP106 GPU. Performance should be around 66% percent faster than its predecessor with the same 75W TDP. Surprisingly, NVIDIA didn’t opt to go with a fully-enabled 192-bit memory bus on this card; instead only 5 channels (160-bits) are enabled, which is also why it offers the more unusual memory capacity of 5GB.

Still farther down the refreshed Quadro lineup we have NVIDIA’s low-profile cards, which cover the rest of the mid-range market and the entry-level market. All based around the GP107 GPU, these cards also serve to reintegrate the Quadro lineup into a single family; the cards these new Quadro products replace were sold as part of the Quadro K-series, and featured a mix of Kepler and Maxwell 1 GPUs. 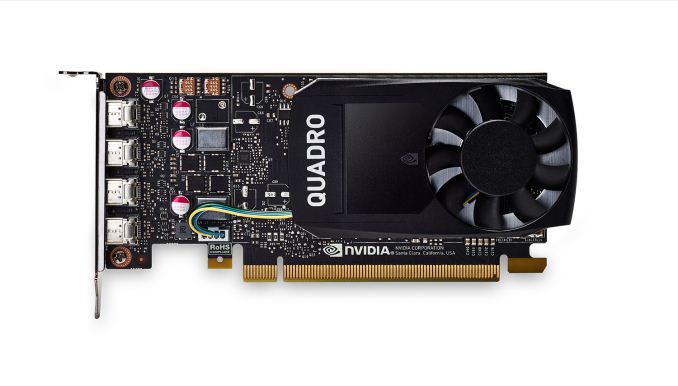 Starting things off here we have the Quadro P1000. Replacing the GM107-based K1200, the P1000 is the most powerful of the low-profile Quadros. It uses a cut-down GP107 GPU clocked at around 1.4GHz. Overall performance on paper should be around 84% faster than the outgoing K1200, while TDP has drifted up just slightly from 45W to 47W. Meanwhile due to its size, NVIDIA has shifted to mini-DisplayPort connectors here. Interestingly, I’m told that these are latching ports, which isn’t standard for mini-DisplayPort but offers a more robust connection as a result.

Rounding out the rest of the pack is the Quadro P600 and P400. The Quadro P600 is essentially a lower-performance version of the P1000. It drops down to 1.1 TFLOPS – around 45% faster than its predecessor – and retains the 4 mini-DisplayPort connectors. TDP on this part is 40W, down from 45W for the Quadro K620. Also of note here, the low-end Quadros are finally getting an upgrade to GDDR5, versus DDR3 that was found on their K-series counterparts. 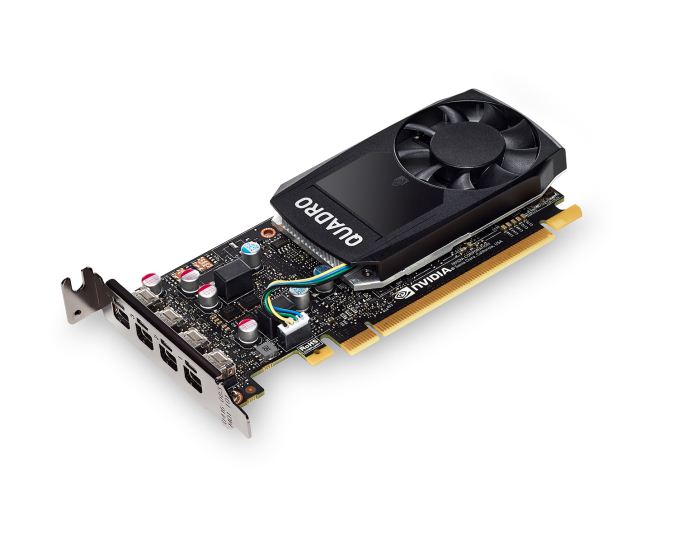 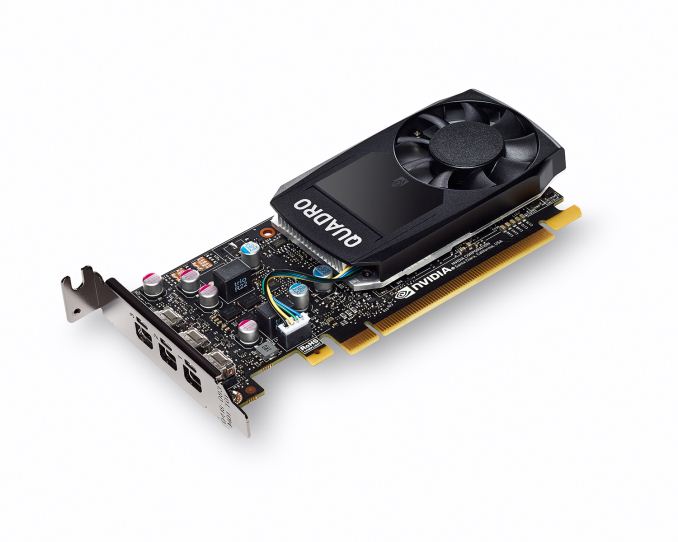 Finally, bringing up the rear is the Quadro P400. This replaces the K420, which was the last Kepler-based part in the Quadro lineup. Performance here should more than double, considering both the vast improvement in architecture and clockspeeds. Meanwhile the P400’s TDP is 30W, versus 41W for the K420. Note that relative to the P600, the P400 loses a mini-DisplayPort; though this is still up from the 2 total ports on the K420.

Wrapping things up, as with the Quadro GP100, the rest of these new Quadro cards will start to arrive in March. NVIDIA hasn’t published formal prices for these cards, but we’re told that prices should be similar to the last-generation Quadro cards that they replace. 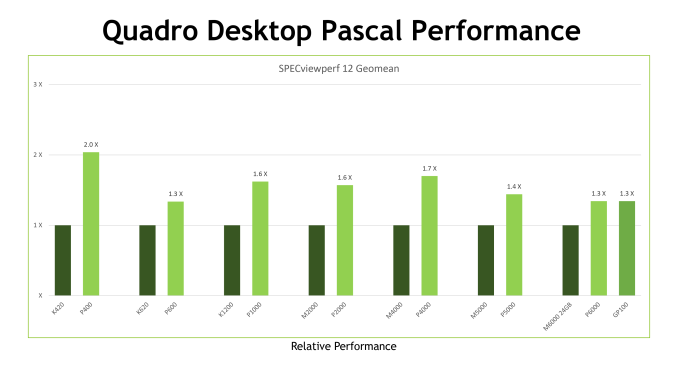