Since the review unit is the GTX 980M model, the Surface Studio results will be the best case scenario for this device, and anyone with the GTX 965M will end up with significantly less GPU performance. With a 4500x3000 resolution display, gaming at the machine's native resolution is going to be a challenge even if the Studio had a GTX 1080, but most games will not run at the default resolutions in any appreciable way. That isn’t always the case though, and we’ll go through that here.

It’s also worth noting that the GTX 980M in the Surface Studio is the 4 GB model, rather than the 8 GB mobile variant which was available. There are games like Rise of the Tomb Raider which require more than 4 GB of vRAM if run at maximum settings, but the GTX 980M is likely going to struggle at those settings regardless.

This is not a dedicated gaming system, but some of our gaming tests were run just to see how the GTX 980M performs in the Studio.

Futuremark’s 3DMark offers several different tests, with varying degrees of complexity. Fire Strike is the most difficult test in this grouping, followed by Sky Diver, Cloud Gate, and Ice Storm Unlimited. As the tests get less complex, they tend to become more CPU bound, and the scores reflect this. Compared to the Clevo systems which are here because they represent desktop class components, the Surface Studio can’t keep up with it’s mobile CPU.

Valve’s Dota 2 is a great benchmark game because it can be played on such a wide variety of hardware. The downside of it is that Valve continues to update it, which can change the performance somewhat, but regardless it’s a game that is playable on devices integrated GPUs, all the way up to SLI gaming rigs.

The GTX 980M is not the major limiting factor here, since even at 1920x1080 enthusiast settings, the game ends up being mostly CPU bound., but it can easily play at about 100 frames per second. Since this game is a bit lighter on the GPU, it is a perfect test bed to try out gaming at the native resolution

The average frame rate, even at 4500x3000 with all of the settings turned on, is still quite good for this type of game, and it is easily playable. Even the minimum frame rate is not too bad considering the number of pixels being driven. I would say it’s unlikely many competitive Dota 2 gamers will choose the Surface Studio as their gaming rig, but Dota 2 looks amazing at this resolution.

Even though Tomb Raider is getting a bit old now, and there’s even a sequel to this game which we normally test, Rise of the Tomb Raider was skipped because it won’t run at 1920x1080 Enthusiast settings on a GPU with 4 GB of vRAM or less. Regardless, Tomb Raider can still be a very demanding game.

The GTX 980M is certainly the limiting factor here, and the Studio slots in right with the other GTX 980M systems. This game is very playable at 1080p settings, but is completely unplayable at 4500x3000. Setting the options to the lowest possible settings does get acceptable framerates, but the texture quality is so poor that it is not worth it.

The latest version of Civilization has already burned too many of my hours for me to admit, and it can be a demanding game, although it tends to be CPU bound as well. Luckily it doesn’t need a huge framerate to be playable though.

Certainly playable, but nothing to get too excited about. Since this is another game with a wide range of performance targets, it was also tested at 4500x3000. In order to get playable results, the settings had to be turned to Low, but it didn’t really impact the look of the game as dramatically as you would expect. At 4500x3000 Low, the Studio managed 53 FPS.

The final game tested is also an older game, and it was picked in the hopes that it would be playable at 4500x3000, but alas, that was not the case. This game can still be demanding on the mobile GPUs, even after this much time.

You are pretty much stuck playing this around the 1080p level, even with the GTX 980M. It might be able to handle 1440p, but that would likely be it.

Without harping on this even further, the Maxwell based GPU was a safe, but ultimately unsatisfying choice for Microsoft to make. A premium device like this deserves the latest generation GPU, especially with this kind of resolution. A GTX 1070 would double the performance of the Surface Studio when gaming, and although that’s not what this device is targeted at, Pascal would be a better choice for other tasks as well.

Microsoft opted for a hybrid storage system. They didn’t want to ship the Surface Studio desktop with just a 256 GB or 512 GB solid state drive, so they decided on leveraging Intel’s Rapid Storage Technology to pair a relatively slow 5400 RPM hard drive (a Seagate-Samsung Spinpoint M9T in the review unit) with a fast SSD. The user doesn’t see the separate drives, so they can just use the system as if it was a single drive. It’s not quite the same implementation as Apple’s Fusion Drive, although it ends up being a similar result.

The base model only has a 64 GB SSD, and thanks to the iFIxit teardown, we can see the 64 GB SSD is just a SATA model as well, which is going to impact performance a lot compared to a PCIe based SSD. Luckily, both the mid and high end models both come with a 128 GB PCIe SSD for the cache. Thanks to the same teardown, we know it’s possible to upgrade the storage completely, although that’s an expensive proposition on top of the already high asking price of this device.

Intel uses Smart Response Technology as part of the Rapid Storage Technology to migrate data around between the two drives, and it attempts to keep your most used data on the SSD for quick access. The larger the SSD, the more this will be able to be done, so bigger is better. But let’s check out a quick performance run using CrystalDiskMark. 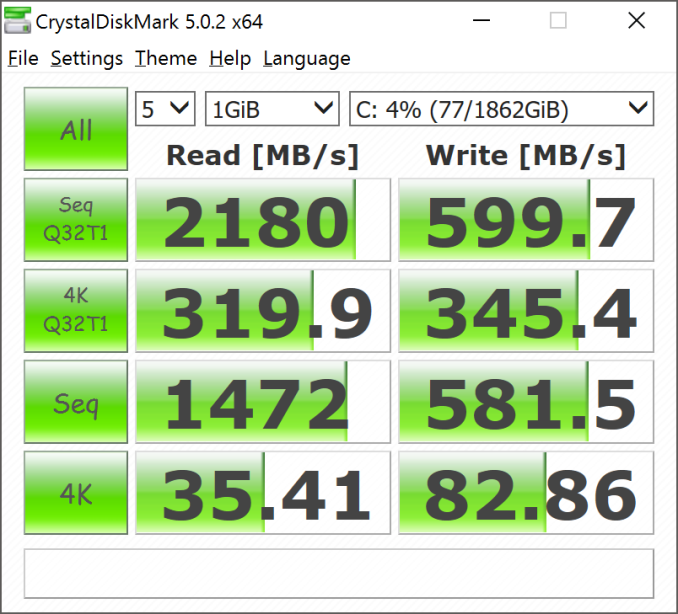 The PCIe SSD is a pretty good performer. Considering the small capacity, the write speeds are quite good.

Let’s not mince words though. A pure SSD solution would be better. Even with 128 GB of cache, eventually you are going to end up hitting the spinning drive for file access, and it’s going to seem very slow. However, for day-to-day use, the experience is better than expected. In many ways, it acts very much like a system with a pure SSD when it comes to boot times and the like, and most applications are cached and end up launching very quickly. For many people, this could be a non-issue, but it is still difficult to justify why there is not even an option for one of the Surface Studio models to offer a more modest sized SSD, in the 512 GB range, as a boot drive, and then the spinning drive as a separate drive for storage. Perhaps this will come later. This is one of the most expensive devices we’ve ever tested, and it’s also the first to come with a hybrid drive since the Apple Fusion iMac. As it stands now, the hybrid drive in the Studio is a good compromise between the Terabytes of storage desktop users are used to, and the performance of a SSD.