If you think the only new card we have in our hands is the GeForceFX 5900 Ultra, you've got another thing coming. ATI is also introducing a 256MB version of their Radeon 9800 Pro:

ATI had to double the number of memory chips on the board and moved to 350MHz DDR-II SDRAM, up from the original 340MHz DDR-I SDRAM used on the 128MB Radeon 9800 Pro. Despite the increase in memory clock, the move to more memory chips actually reduced performance a bit (the 256-bit bus now must be split among twice as many chips, which does create some overhead) and when combined with the increased memory clock the end result is that the Radeon 9800 Pro 256MB is no faster in most cases than the 128MB version. 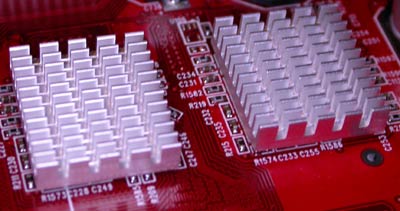 Twice as much memory, twice as many chips, a higher memory clock - but identical performance to the 128MB card is what the $499 Radeon 9800 Pro will get you

We encountered some memory artifacts at random periods during our testing of the Radeon 9800 Pro, especially during our Doom3 testing. We're assuming this is due to the engineering sample nature of our review hardware and that ATI will fix the issue before mass production.