Although there are several processor options in the Clevo P870DM2, Mythlogic has outfitted the review unit with the highest performance model they offer: the Intel Core i7-6700K. For those familiar with Intel’s lineup of processors, they offer several model lines, with the lowest power ones being the Y series, which are 4.5-Watt, and then the 15/28W U series, and then the highest tier of their mobile processors in the H and HQ, with the latter being the quad-core mobile parts. These top out at 45-Watts, and we see them in almost all gaming laptops. Clevo is marketing this as a desktop replacement, and as such, every processor option is from the Desktop lineup. The majority of the processor options are in the 65-Watt series from Intel S lineup, featuring quad-cores and 6 MB of cache. The processor in the Phobos 8716 review unit is from the K series, with a 91-Watt TDP, 4.0-4.2 GHz, 8 MB of cache, and it is unlocked for overclocking. From a power perspective, the Core i7-6700K has just over twice the thermal headroom of a typical H series processor found in a gaming notebook. Twice the TDP doesn’t mean twice the performance, of course, but there is certainly a lot more potential performance on tap than any H series could offer.

To see how much performance is available, the Clevo P870DM2 was run through our standard lineup of tests, and then compared against several other systems. Of particular interest will be comparisons against the last Desktop Replacement notebook that we tested in the Clevo P750ZM, which was outfitted with the Devil’s Canyon Core i7-4790K, and that CPU actually has a slight frequency advantage over the i7-6700K, with the former topping out at 4.4 GHz and the latter at 4.2 GHz, but with the advantage of the Skylake architecture versus the Haswell architecture in Devil’s Canyon. As always, check out our notebook bench if you’d like to compare this laptop to any other we have tested.

Our first tests are from Futuremark’s PCMark benchmark. This test runs through several real-world applications, and is a complete system test, from the storage to the CPU to the GPU. The Phobos 8716 sets a new bar here for performance in a notebook. That’s not surprising since it has the fastest CPU, the fastest GPU, and the fastest SSD in the Samsung 950 Pro.

This test tends to be focused on pure CPU performance, and more cores with higher frequencies tend to dominate on this test. We can see that as well with the Devil’s Canyon in the P750ZM slightly edging the Skylake i7-6700K, thanks to a higher turbo frequency available, but only on the single-core tests. On the multi-core tests, the Skylake pulls ahead with its more advanced multi-core turbo, and benefits like Speed Shift.

The better multi-core performance of Skylake once again pulls ahead easily here, with performance significantly better than the Haswell Devil’s Canyon.

Finally, web performance is always a priority, although it can be heavily influenced by the browser and platform. It is still something that everyone does every day. When Windows 10 launched, we switched to Edge for our tests, from Chrome on previous versions of Windows. Each browser is marked in the results.

It should come as no surprise after the previous benchmarks that the Clevo P870DM2 / Mythlogic Phobos 8716 easily trounces all previous computers on our web benchmarks as well. Packing a desktop CPU into a notebook has some drawbacks in terms of heat dissipation, but at the end of the day the performance is a good jump ahead of any of the H series processors.

As with any of these boutique computers, there is quite a bit of customization available on all of the components, and the storage is no exception. For the review unit, Mythologic supplied the Samsung 950 Pro NVMe SSD, and if you saw the review on that drive, you’d be aware that it is one of the fastest consumer SSDs available today, and in fact was only recently pipped with the introduction of the 960 Pro. 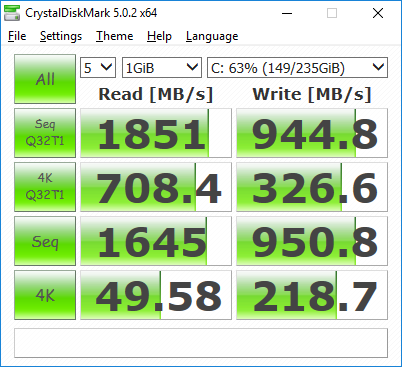 With the 256 GB model which is in the review unit, there are not the maximum amount of NAND dies to give the maximum performance, but regardless the results are still very, very good. Read rates approaching 2000 MB/s is likely going to be enough for almost anyone. Mythlogic will outfit the Phobos 8716 in multiple ways, and there are actually two M.2 slots if you need more SSD storage, and also two 2.5-inch SATA slots as well if you need a bit more bulk storage for game downloads.