One of the more impressive aspects of the Skull Canyon NUC6i7KYK is the reappearance of Thunderbolt in a mini-PC. We have already covered Thunderbolt 3 in good detail. From the perspective of a Skull Canyon evaluation, the Thunderbolt 3 port does deserve a bit of attention. It must be noted that this USB Type-C port can also act as a USB 3.1 Gen 2 host port. Our evaluation of this feature is in two parts - we first hooked up a SanDisk Extreme 900 1.92TB USB 3.1 Gen 2 SSD and ran a quick speed test. We were able to see results similar to our review numbers, indicating that the USB 3.1 Gen 2 mode was indeed active. For the Thunderbolt part, we decided to check out Thunderbolt networking with our direct-attached storage testbed. 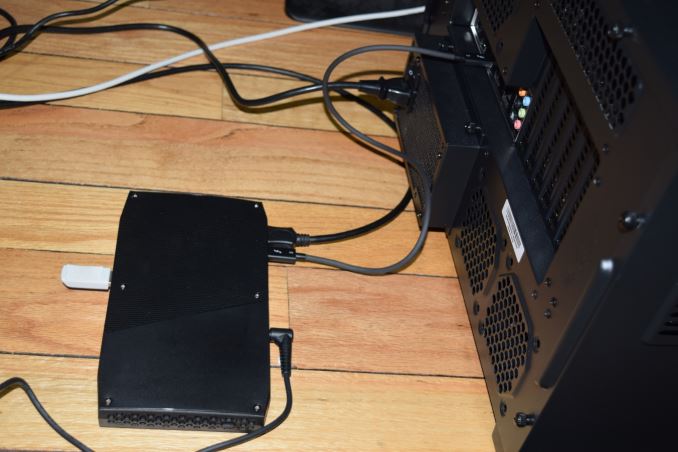 Connecting the Thunderbolt ports on the two machines and allowing the PCs to talk to each other automatically creates a 10Gbps network adapter. For a setup with just two machines, it is enough to just set static IPs on the interfaces of both machines in the same subnet, and setting the network location to private so that the machines can talk to each other. We configured a RAM drive on the testbed and mapped it as a network drive on the NUC6i7KYK, Running CrystalDiskMark on the mapped drive showed read speeds of 700 MBps and write speeds of 620 MBps, indicative of a 10Gbps link. The gallery below presents some screenshots of the benchmarks as well as the Thunderbolt networking setup steps.

Moving on to the business end of the review, let us get the complaints out of the way - While the size and form-factor of Skull Canyon are impressive, the acoustic profile is not that great. We would gladly trade a modest increase in the footprint of the system for lower fan noise. That said, the fan noise is in no way comparable to the BRIX Gaming lineup. It is just that it is not as silent as the traditional NUCs.

On the board layout front, we are unable to fathom why the CPU's PCIe lanes are not used at all. It would have been great to have a dual-port Alpine Ridge controller hang directly off the CPU's PCIe lanes. Finally, the ports on the chassis could have done with better spread. The two pairs of USB ports are such that one occupied port ends up making it difficult to utilize the other one in the pair. A port on one of the sides, or, on the lid (without relying on third-party designs), would be very welcome.

But with the above caveats in mind, Skull Canyon is definitely a great product. Simply put, it packs the most punch among systems with similar footprints. It is excellent for casual gamers, but, unfortunately, stops short of being a replacement for systems like the Zotac ZBOX MAGNUS EN970 or the ASRock VisionX 471D - two small form-factor PCs that integrate discrete GPUs at the cost of a larger footprint compared to Skull Canyon. The Thunderbolt 3 port, with an external GPU dock, can somewhat make up for the lack of a discrete GPU for gamers. However, the cost factor becomes a major issue. The 4C/8T configuration of the Core i7-6770HQ is also attractive to consumers looking for a small form-factor system with a powerful CPU, but, they must remember that some price premium is being paid for the Iris Pro graphics.

I am actually looking forward to what vendors like Zotac and ASRock can do with a similar design. If they could take a Skylake-H processor without Iris Pro (say, Core i7-6820HQ), and use the PCIe lanes off the CPU to hook up a mobile discrete GPU, it could deliver the best of both worlds - all the 45W TDP of the CPU can be used to provide raw processing power for CPU-intensive workloads, while a dGPU can handle graphics duties with a separate power budget.

To summarize, Intel has indeed managed to change the game with the NUC6i7KYK. A look at the increase in the gaming capabilities over the previous generation 'gaming' NUCs make the Skull Canyon updates to appear evolutionary in nature. However, the overall platform capabilities (including a much more powerful -H series CPU instead of a -U series CPU, as well as the integration of Thunderbolt 3 and dual M.2 PCIe 3.0 x4 SSD slots) are enough to justify the price premium ($650 for the barebones configuration).