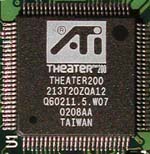 Home theater enthusiasts probably remember that the All-in-Wonder 9700 makes use of the R300 core to provide component output with a simple cable dongle. We actually saw the component output driving an HDTV monitor when we were visiting ATI for our preview coverage and there the company promised us that the overscan issues we described in our initial coverage of the All-in-Wonder 8500DV were all but gone.

Judging from what we saw in the preview system, the component output feature does work properly; however, it seems that it does not work properly on every television. We tested the component output of the All-in-Wonder 9700 Pro on our test HDTV (a Toshiba TheaterWide HD 65H80) and found that the system still had overscan issues. It could be limited to our individual HDTV model, and we do know that the YPrPb output does work in some systems, but at least on our set there still seems to be a minor issue to be worked out.