In general, camera has become probably the single biggest point of differentiation between smartphones at this point. As smartphones are often the only camera that most people carry on a day to day basis, the rear camera on a smartphone really cannot be a disappointment relative to the competition. While we can talk about how much a front-facing camera matters in terms of quality, it’s pretty safe to say that for photos and videos that are worth saving will be taken with the rear-facing camera.

While post-processing and a number of other factors are going to have a huge impact on the overall camera experience, the foundation that makes it possible to deliver a great camera is always going to start at the hardware.

In the case of the Galaxy S7, Samsung has done something that I thought they’d never do, which is move backwards in resolution in order to improve pixel sensitivity. In the case of the Galaxy S7, Samsung has moved from the Sony IMX240/Samsung S5K2P2 to the Sony IMX260/Samsung S5K2L1 sensor, with a 1.4 micron pixel size relative to a 1.12 micron pixel pitch in the previous generation. This means that there’s a 56% increase in sensitivity per pixel. Assuming the same process technology, this does improve low light performance significantly. While to some extent it’s true that improved CIS (CMOS image sensor) technology can alleviate the downsides of smaller pixels, on the same technology you have to reduce your fill factor/active sensor area. The other problem is that while read noise on the sensor does reduce per pixel as you reduce pixel size, the overall sensor read noise trends upwards. This means that the region in which the CIS noise is primarily limited by shot noise is going to be smaller as you reduce pixel size. Shot noise is an unavoidable reality of existence, to the extent that even our eyes can see this “visual snow” if ambient light is sufficiently dim.

However, in the case of the Galaxy S7 I suspect that there’s more to the story, because the dual pixel AF system means that for each 1.4 micron pixel each pixel needs two photodetectors. In order to make phase detection work, there has to be sufficient spatial separation to make this system work properly, so some of the benefit of these larger pixels will inevitably be eaten up in order to enable PDAF that works in basically all lighting conditions.

The other notable change here is that the Galaxy S7 uses an even wider f/1.7 aperture. Unfortunately, in Samsung's efforts to try and make the module thinner they've made the focal length slightly shorter than before which results in an effective focal length of 26mm. This and the wider aperture could lead to compromises as light is entering the optics at a more extreme angle than before. 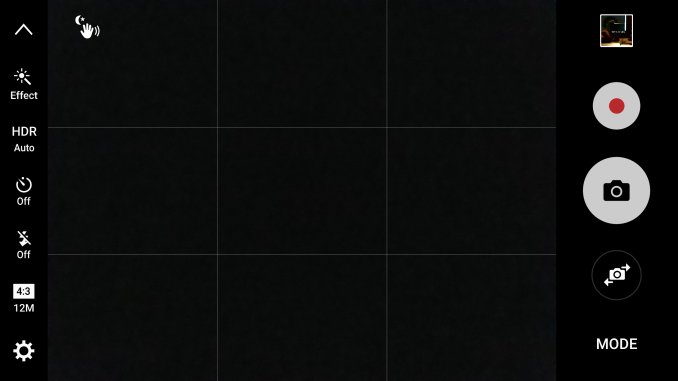 With these basics covered, we can move on to a discussion of the user experience. While in the past it was easy enough to just take some still shots on a tripod, a holistic view of camera quality really needs to take into account far more than just the end result. A poorly designed camera application with low resolution, low frame rate preview, improper preview aspect ratio, poor control layout, and other issues can easily make it difficult, if not impossible to get the photo that you want. These issues are thankfully getting less common, but these problems can make it almost impossible to recommend a phone for its camera, no matter how good the results are. 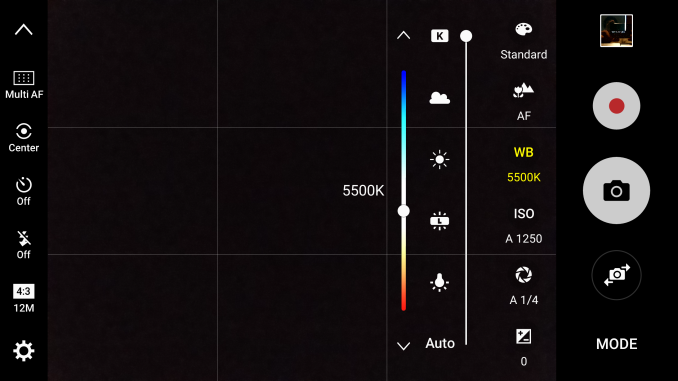 In the case of the Galaxy S7, the camera application is a nice upgrade over the Galaxy S6 at launch, but for the most part nothing is really different this go around. I’m not going to spend too much time here, but the short story is that I don’t think that Samsung is doing anything wrong here, and things are pretty much as good as they’re going to get. 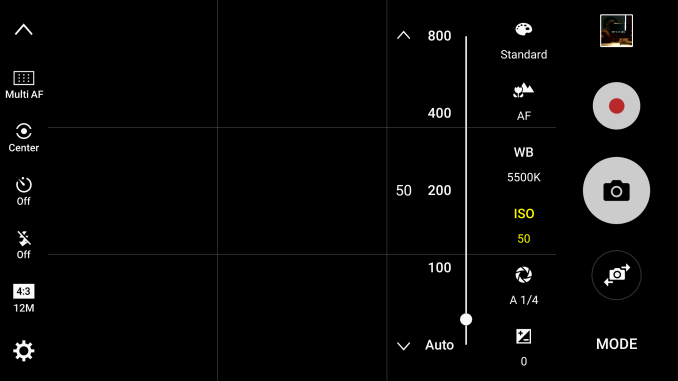 While leaving it at that would be enough, I want to recognize some of the improvements that Samsung has implemented here. The major improvement here is that Pro mode is finally useful, as this mode now allows for adjusting auto-exposure and AF targets, in addition to EV, shutter speed, ISO, white balance with 100K granularity, and manual focus. The one notable shortfall here is that Samsung only allows 800 ISO max in manual ISO mode when the true maximum is 1250. For better or worse though, that’s the only notable problem I encountered with the camera app itself. It’s easy to think that Samsung hasn’t done anything notable here, but this is more a testament to the execution of design more than anything else.

However, before we move on to image quality testing, we can take a look at our focus and capture latency tests. For those that are unfamiliar, this is a fairly simple test designed to see how long it takes for a phone to focus and capture a scene on our standard ISO test chart in good lighting conditions, which can give a fairly good idea for best case latencies. 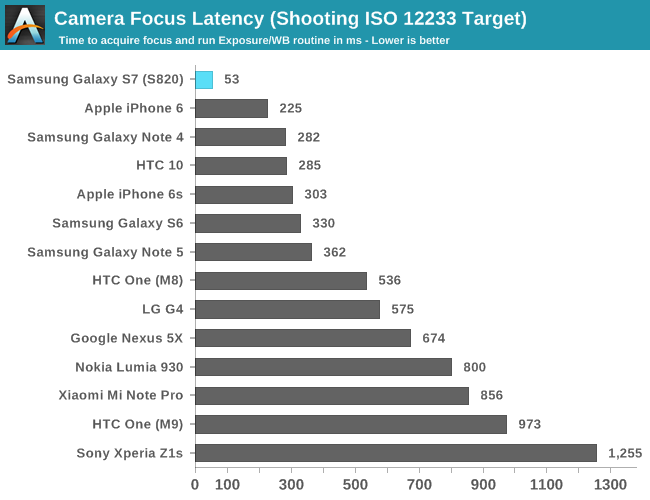 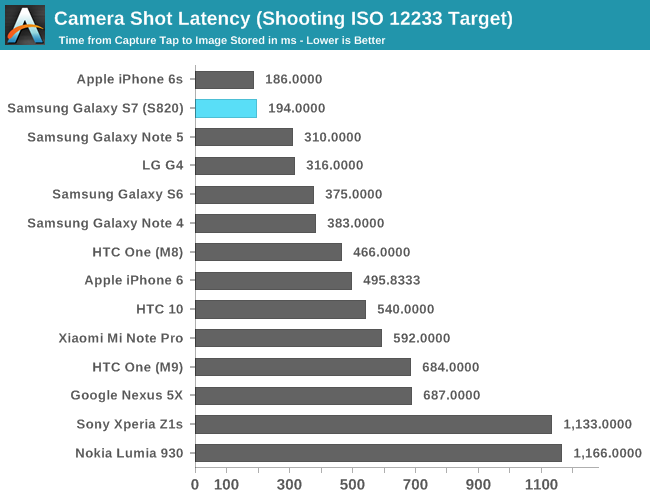 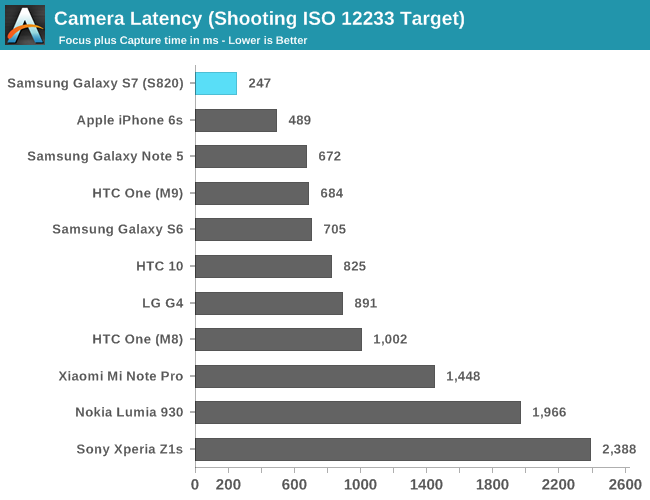 It’s probably not a surprise, but the Galaxy S7 is really, absurdly quick to take photos and focus. There is nothing out there that can realistically match the dual pixel AF system in the Galaxy S7, especially once you get into low light scenarios where traditional PDAF systems are overwhelmed by noise that can’t be easily canceled out. Samsung’s sheer prowess in semiconductor design and manufacture is really showing here, even in the best case.