The average laptop these days comes with a wireless card which can transmit and receive two spatial streams at once, and when it’s used with 802.11ac, that gives a maximum connection speed of 866 Mbps. The XPS 15 comes with a Broadcom wireless card which is 3x3:3, meaning it can work with a third spatial stream and has 50% more bandwidth available, which gives a maximum connection speed of 1.3 Gbps. Although on paper this is higher than Gigabit Ethernet, wireless rarely gets close to its maximum transmission speed whereas Gigabit Ethernet does. But assuming you have a router capable of 3x3 Wi-Fi, this solution should have a better shot of coming close to Gigabit Ethernet.

The XPS 15 sets a new AnandTech record on this test, beating out the Intel 8260 that only just jumped ahead on the last review. But to be honest I was expecting a bit better, if only because the 2x2 Broadcom solution could already hit 500 Mbps, so I was sort of expecting this to be over 700, but it’s still a good enough result that I didn’t feel like I needed to connect Ethernet when I was moving large files around on it, which isn’t something I can say about most laptops.

When it comes to thermal considerations, shrinking the 15.6-inch form factor down, but still using higher performance (and therefore higher wattage) parts could be a concern. The CPU thermal design power is 45-Watts, and while NVIDIA doesn’t disclose the mobile GPU TDPs, it’s likely around 60-Watts or so. In most cases, GPU intensive workloads are not too hard on the CPU, and that’s true the other way as well. Laptop gaming, for instance, is very heavy on the GPU but generally not as taxing on the CPU, so in most scenarios Dell won’t have to remove the entire combined TDPs of both parts. 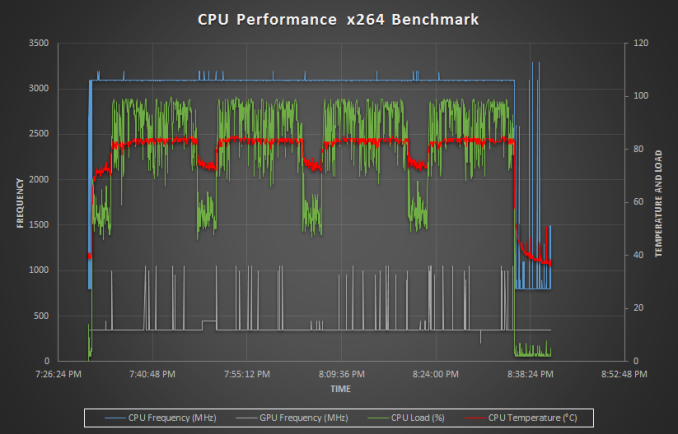 To test the CPU performance with a heavy and long duration workload, I logged the frequency and temperature of the CPU while running the x264 benchmark, which takes about an hour and runs the CPU near 100% load for the duration. As you can see, there was no thermal throttling at all in this workload, but the CPU certainly got warm, peaking around 84°C. 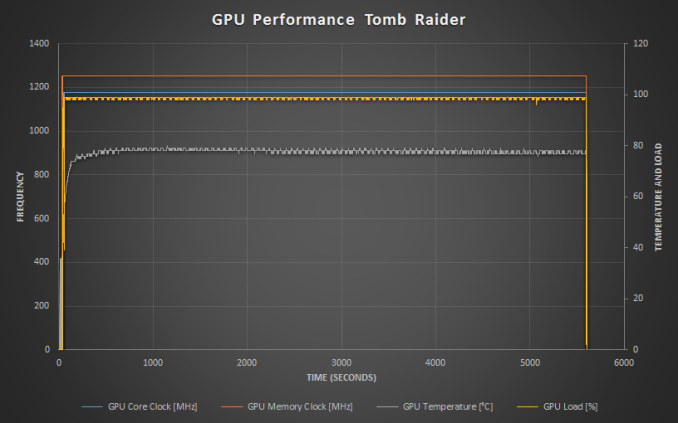 To test the GPU, I looped the Tomb Raider benchmark for about an hour, logging the GPU data every second. As with the CPU test, there was no thermal throttling of the GPU despite the heavy load and long duration. The GPU temperature never got over 79°C during this test.

Dell did a nice job on the cooling solution for the XPS 15. Despite the smaller chassis, it doesn’t appear to throttle under these workloads.

The other side of the cooling is noise. It’s an unfortunate side effect that in order to remove the heat, we have to rely on fans, and laptops with quad-core processors and GPUs are going to need fans. As with most laptops, the XPS 15 can disable its fans completely when lightly loaded, allowing quite operation, but once you do start to do some work, the fans slowly ramp up, starting around 36 dB(A) and going all the way up to 41.9 dB(A) on sustained light workloads. The XPS 15 can be silent, but once the fans kick in they are certainly audible.

Under heavy loads, the XPS 15 is, to put it bluntly, loud. I measured 52.7 dB(A) with the SPL meter 1” over the trackpad. This was after the GPU load test, where Tomb Raider was left running for over an hour. As a comparison, the Lenovo Y700 with the same CPU and GPU, and doing the same test, was closer to 44 dB(A) after the hour, and since decibels are logarithmic, that’s a big difference. This is the down side of a slim and light form factor: the fans are louder. 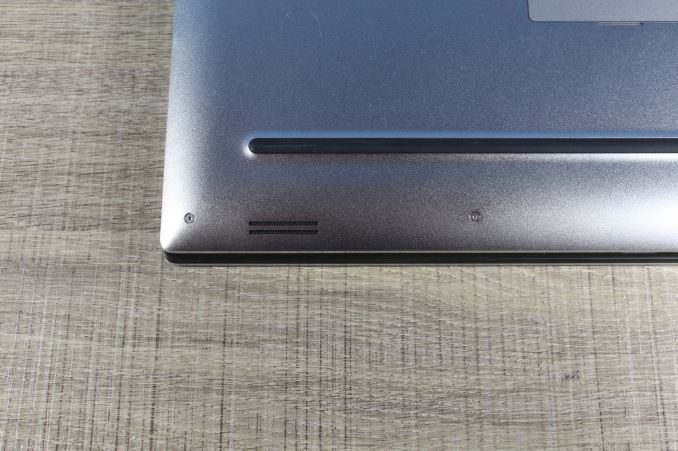 The XPS 15 has two speakers on the bottom of the laptop near the front. I measured 90 dB(A) from the speakers playing music, which makes this one of the loudest laptops I’ve seen. The sound quality is typical of a laptop, with not a lot of range and a lack of low end response.