The Performance Impact of Asynchronous Shading

Finally, let’s take a look at Ashes’ latest addition to its stable of DX12 headlining features; asynchronous shading/compute. While earlier betas of the game implemented a very limited form of async shading, this latest beta contains a newer, more complex implementation of the technology, inspired in part by Oxide’s experiences with multi-GPU. As a result, async shading will potentially have a greater impact on performance than in earlier betas.

Update 02/24: NVIDIA sent a note over this afternoon letting us know that asynchornous shading is not enabled in their current drivers, hence the performance we are seeing here. Unfortunately they are not providing an ETA for when this feature will be enabled. 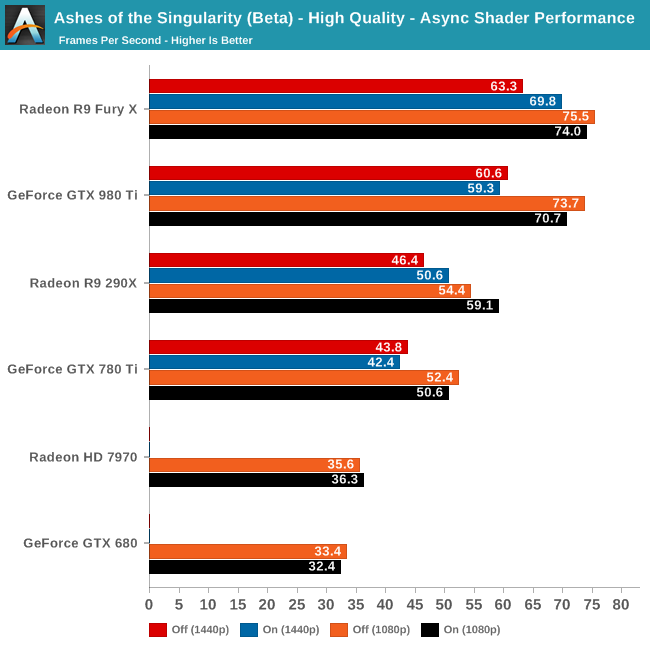 Since async shading is turned on by default in Ashes, what we’re essentially doing here is measuring the penalty for turning it off. Not unlike the DirectX 12 vs. DirectX 11 situation – and possibly even contributing to it – what we find depends heavily on the GPU vendor. 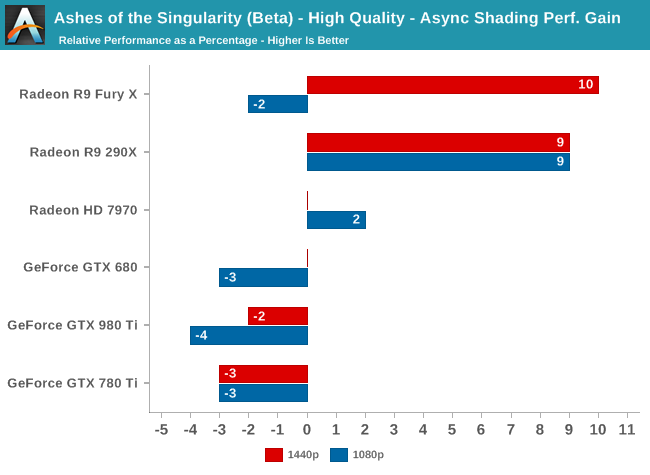 All NVIDIA cards suffer a minor regression in performance with async shading turned on. At a maximum of -4% it’s really not enough to justify disabling async shading, but at the same time it means that async shading is not providing NVIDIA with any benefit. With RTG cards on the other hand it’s almost always beneficial, with the benefit increasing with the overall performance of the card. In the case of the Fury X this means a 10% gain at 1440p, and though not plotted here, a similar gain at 4K.

These findings do go hand-in-hand with some of the basic performance goals of async shading, primarily that async shading can improve GPU utilization. At 4096 stream processors the Fury X has the most ALUs out of any card on these charts, and given its performance in other games, the numbers we see here lend credit to the theory that RTG isn’t always able to reach full utilization of those ALUs, particularly on Ashes. In which case async shading could be a big benefit going forward. 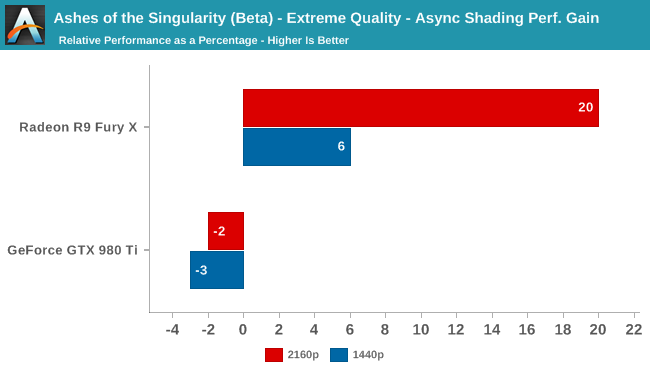 Meanwhile pushing our fastest GPUs to their limit at Extreme quality only widens the gap. At 4K the Fury X picks up nearly 20% from async shading – though a much smaller 6% at 1440p – while the GTX 980 Ti continues to lose a couple of percent from enabling it. This outcome is somewhat surprising since at 4K we’d already expect the Fury X to be rather taxed, but clearly there’s quite a bit of shader headroom left unused.